American Bridge will be focused on the Trump administration, while Judicial Watch will focus on the Obama years 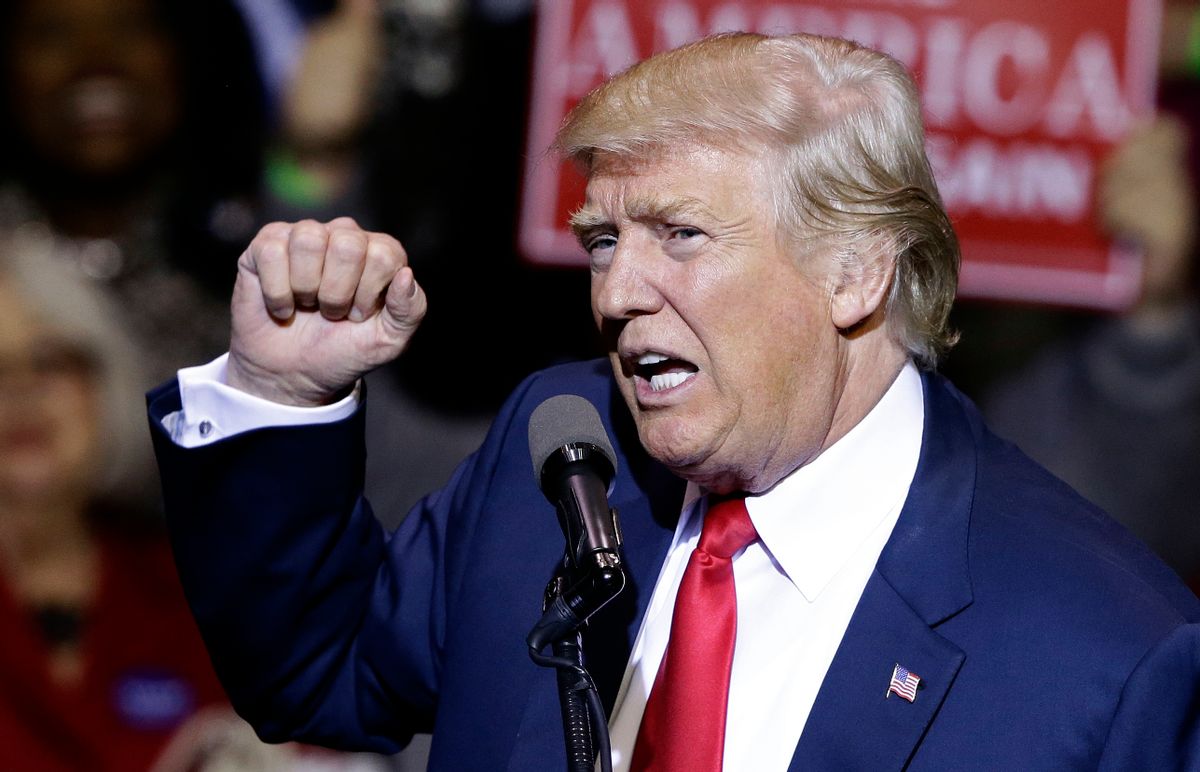 In this Dec. 6, 2016, photo, President-elect Donald Trump speaks to supporters during a rally in Fayetteville, N.C. They’re at opposite ends of the political spectrum, but two Washington groups that had been focused squarely on Hillary Clinton now have something in common: preserving their very existence. On Tuesday, each made its first stab at carving out a new mission, touting their ability to bird-dog the incoming Trump administration. They’ll use similar tactics, including Freedom of Information Act requests, lawsuits and public shaming, but a conservative group operating in Republican-led Washington is likely to have a tougher time pleasing its donors. (AP Photo/Gerry Broome) (AP)
--

WASHINGTON — They're at opposite ends of the political spectrum, but two Washington groups that had been focused squarely on Hillary Clinton now have something in common: preserving their very existence.

On Tuesday, each made its first stab at carving out a new mission, touting their ability to bird-dog the incoming Trump administration. They'll use similar tactics, including Freedom of Information Act requests, lawsuits and public shaming, but a conservative group operating in Republican-led Washington is likely to have a tougher time pleasing its donors.

American Bridge, a liberal-funded super PAC, is vowing to hold President-elect Donald Trump accountable by vetting his administration picks, highlighting his business conflicts of interest and reminding voters when he's breaking his campaign promises. That comes after serving as Clinton's main opposition research shop throughout her presidential campaign.

David Brock, the group's founder, said Tuesday on a conference call with reporters that several donors approached him at Clinton's concession speech in New York and asked him to stay active. Clinton herself was pleased with American Bridge's new Trump focus, Brock said, saying the two had spoken after the election.

"Even though the moment was bleak, she was happy to hear we are staying in the fight," he said.

Meanwhile, the conservative nonprofit organization Judicial Watch plans to follow Trump's "drain the swamp" efforts by urging him to stop what it says is government waste and corruption that festered in the Obama years. That comes after making headlines in recent years by suing to obtain batches of Clinton's emails while she was secretary of state.

Tom Fitton, the group's president, said during a Judicial Watch livestream Tuesday that Trump can take steps to "drain the swamp" by encouraging investigations of how President Barack Obama's administration handled everything from the Internal Revenue Service's policing of political nonprofit groups to its distribution of subsidies to clean energy companies.

Both issues were the subject of investigations by congressional committees, the Justice Department and inspectors general, with the administrative bodies finding no wrongdoing by government officials.

Fitton, in an earlier interview with The Associated Press, said he hopes Trump will maintain a more open government than he says Obama did — adding that Judicial Watch had filed 3,000 Freedom of Information Act requests in the past eight years and sued for openness some 300 times.

Judicial Watch has about 60 active lawsuits against the Obama administration, according to the group's senior attorney Ramona Cotca. When Trump takes office on Jan. 20, his administration will handle that litigation — which could be an awkward exercise, since career attorneys will continue to be involved.

"Many fires have been set on the horizon by the left and President Obama, and President Trump needs to send out fire teams," Fitton said in the livestream. If he doesn't, Judicial Watch will call him out, Fitton said.

Yet the lifeblood of any group is its donations. If donors turn away from an organization because they don't like what it's doing, it cannot survive.

That's why it might be easier for American Bridge to thrive in a Trump era than Judicial Watch.

Brock has counted on large donations from hedge-fund billionaire George Soros and other wealthy liberals since forming the group during Obama's 2012 re-election. There's little financial risk for American Bridge to pursue an anti-Trump agenda.

On the other hand, Judicial Watch's donors might start withholding money if the group becomes too harsh on Trump. And with Obama and Clinton fading from the news next year, it is unclear how enthusiastic donors will be about Judicial Watch's lingering attacks on them.

As a nonprofit, Judicial Watch is not required to publicly disclose its donors. However, other charities must report when they've given money to it. One of the most recent contributors to Judicial Watch is the Sarah Scaife Foundation, which gives money to conservative and libertarian causes.

Fitton said he's not worried about continued funding, noting that Judicial Watch has been around since 1994 and dogged Republican President George W. Bush before turning its attention to Obama. The nonprofit's motto, after all, is "Because no one is above the law!"

But there's no denying that in the Obama era, Judicial Watch's funding has skyrocketed. It took in $8.8 million in 2008, the final year of Bush, and almost $31 million in 2014, the most recent tax form available online shows.