Donald Trump and Rodrigo Duterte, BFFs: Murderous Philippine strongman is who Trump would love to be 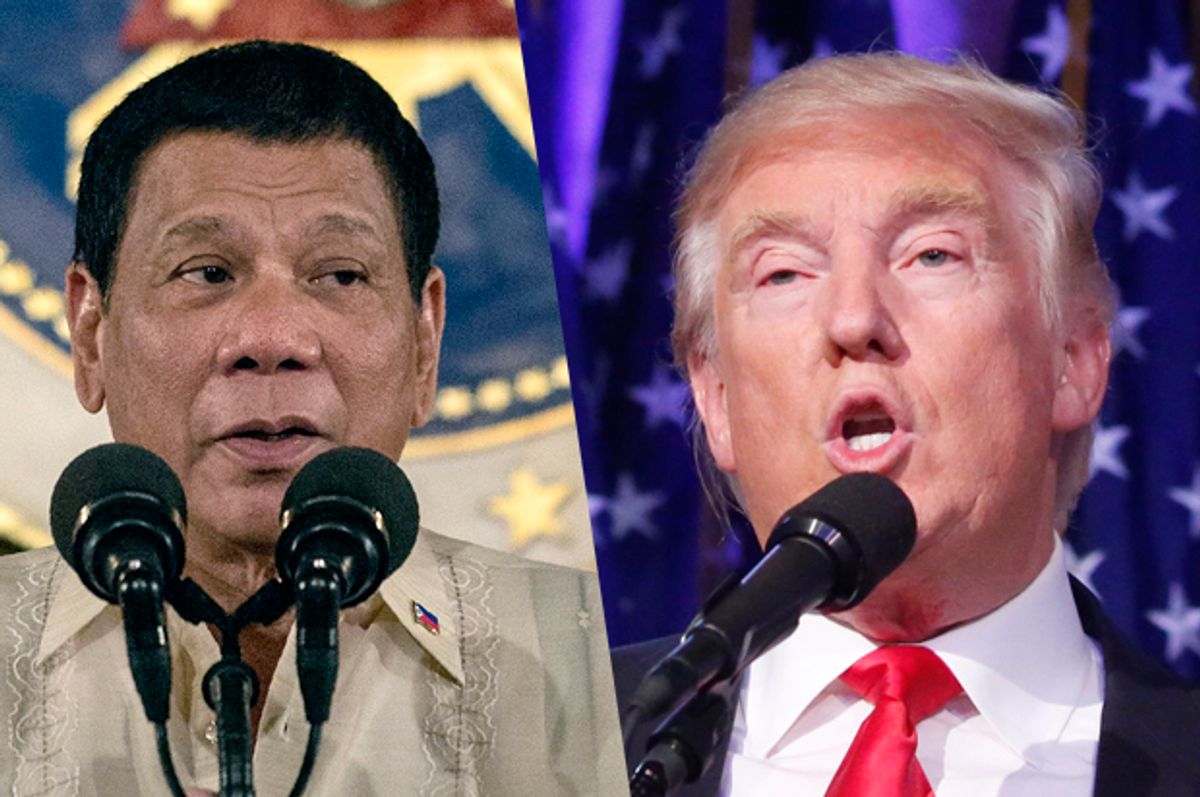 President-elect Donald Trump had a good day on Wednesday. After having been embarrassingly overlooked as Time magazine's Person of the Year for 2015, which galled him to no end, he finally got the nod this year. Trump was thrilled.

He even submitted himself to a rare (these days) interview in which he declared, “It’s a great honor, it means a lot, especially me growing up reading Time magazine.”

Evidently he failed to read the editor's explanation or he would have noted that it wasn't quite the honor he thought it was:

For reminding America that demagoguery feeds on despair and that truth is only as powerful as the trust in those who speak it, for empowering a hidden electorate by mainstreaming its furies and live-streaming its fears, and for framing tomorrow’s political culture by demolishing yesterday’s, Donald Trump is Time’s 2016 person of the year.

Time's profile and interview made it quite clear what that editorial was talking about, even if the president-elect didn't understand it. He made many fatuous statements along the lines of his "analysis" of world affairs, in which he explained about the European Union that "other people are being forced into countries and some people are unhappy about it" because "a lot of bad things are happening."

Trump also explained that working people don't want to see their president carrying his own luggage and "that's pretty much the way it is" and named New England Patriots head coach Bill Belichick as an example of good leadership.

There was more in that vein, but what illustrated the editor's note most vividly was his response to reporter Michael Scherer quoting President Barack Obama while urging his fellow citizens to rediscover the "better angels" of human nature. Trump abruptly interrupted him and excused himself for a moment to retrieve a copy of a tabloid newspaper with the front-page headline “'EXTREMELY VIOLENT' GANG FACTION." The article was about a surge in local crime in Long Island allegedly committed by immigrants. Trump said, “They come from Central America. They’re tougher than any people you’ve ever met. They’re killing and raping everybody out there. They’re illegal. And they are finished.”

When Scherer observed that this is the kind of rhetoric one hears from Philippine president Rodrigo Duterte, a man responsible for the wanton killing of thousands of his own citizens, Trump replied, “Well, hey, look, this is bad stuff. They slice them up, they carve their initials in the girl’s forehead, OK. What are we supposed to do? Be nice about it?”

This should not be terribly surprising since he spent the last year and a half on the campaign trail bellowing about ISIS, saying he loves waterboarding and wants to do "more than that" and even hinting at times that he would consider "chopping off heads." Trump has said he believes that the families of terrorist suspects should be tortured or "taken out." He has delighted in regaling his followers with lurid stories about war crimes, such as the apocryphal tale he loved to tell about Gen. Jack Pershing in the Philippines during the Spanish-American War:

They took 50 [Muslim insurgents], they lined them up. They took a pig and then took a second pig and they cut the pig open and they took the bullets from the rifles. And they dumped the bullets into the pigs and they swashed it around. Then they took the bullets and they shot 49 of the 50 people. The fiftieth person, they said, ‘Take this bullet and bring it back to all of the people causing the problem’ and tell 'em what happened tonight. And for 42 years they didn’t have a problem with radical Islamic terrorism, folks, OK believe me.

These violent anecdotes are all in the context of war and terrorism, not that it makes them legal or acceptable. But his comments in Time were about dealing with criminal matters, which makes it even more disturbing in light of the fact that Trump actually spoke with Duterte last week and invited him to the White House. According to the Philippine government, he also endorsed Duterte's extrajudicial campaign against alleged drug dealers and users, saying he's doing things "the right way."

We know Trump follows The New York Times since he complains so much about it. One hopes that he saw yesterday's grisly array of photographs taken by Daniel Berehulak showing assassinations at the hands of the Philippine police and vigilantes, making clear the horror that Duterte has brought to his country. The idea that the American president-elect would find Duterte's methods anything but morally outrageous is disturbing indeed.

An article by Adrian Chen in The New Yorker about Duterte's short tenure, called "When a Populist Demagogue Takes Power" will send chills down your spine. The Philippine leader is crude, impulsive, blasphemous and violent, explaining his propensity to offend by saying, "I am testing the élite in this country"— which is funny because he comes from a very prominent political family. Aside from his domestic crackdown on drug users and drug sellers, Duterte is blowing up relationships with other nations on what seems to be an ad hoc basis. He famously referred to President Barack Obama as "son of whore" and has made moves to extricate his nation from its long and close relationship with the U.S.

According to people who know him, Duterte is hypersensitive to criticism and will "snap" if he feels someone is talking down to him. Chen described him as a person who "thinks out loud, in long, rambling monologues, laced with inscrutable jokes and wild exaggeration" and pointed out that while his manner is part of his populist image, it inevitably leads to misunderstandings. Duterte is also a conspiracy theorist who has always been fascinated by the police and military men. He even shot a classmate in the leg when he was in college. Luckily it was only a flesh wound.

Any normal person who knew anything about the world would be repulsed after being compared to such a man, much less compliment him on his "get tough" policy. But this is Donald Trump we're talking about. No, he isn't quite Rodrigo Duterte but let's just say they share certain traits. Remember that nearly 30 years ago Trump is the man who took out a full-page ad titled "Bring Back the Death Penalty," which said, “CIVIL LIBERTIES END WHEN AN ATTACK ON OUR SAFETY BEGINS!”  Clearly, his beliefs have not evolved much.

In case you were wondering, Duterte has an 86 percent approval rating. Right now, Trump's is at 50 percent and rising.