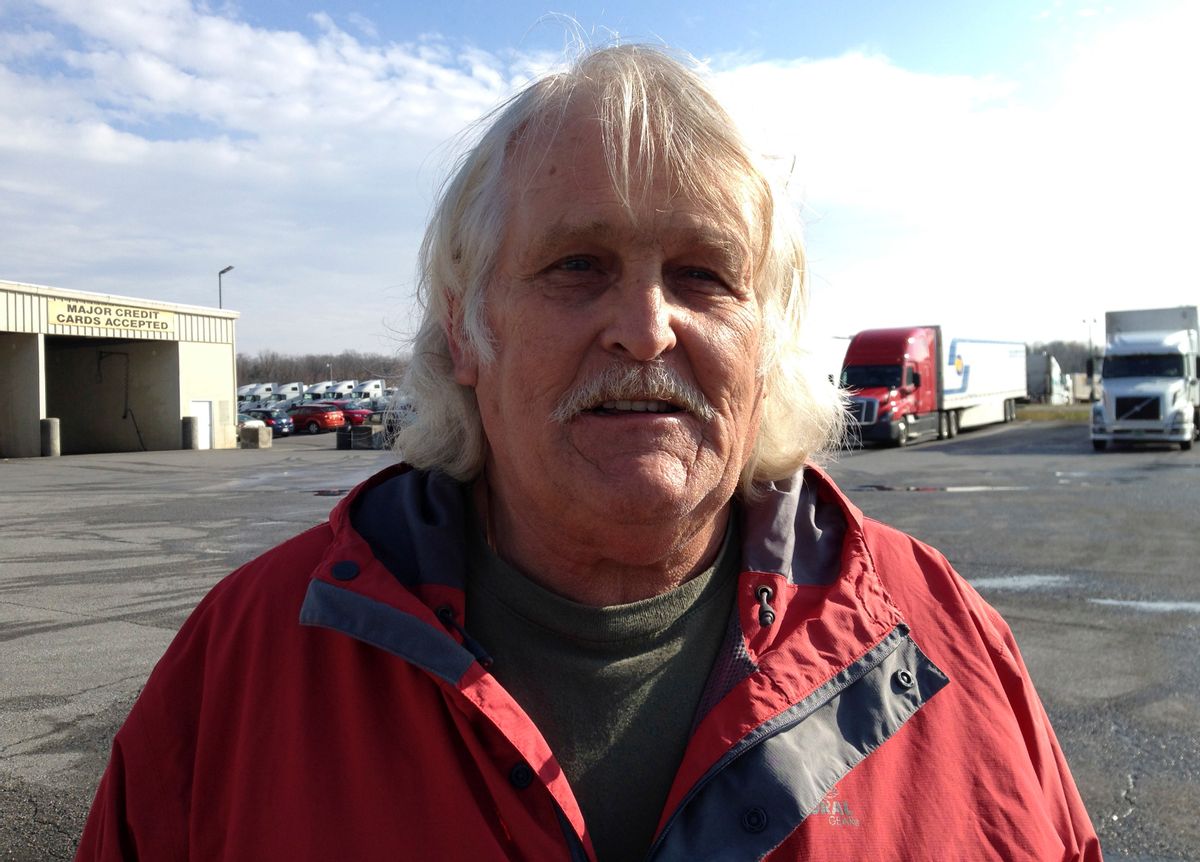 Truck driver Bill Varnado of Dallas, Ga., talks at a truck stop along Interstate 81 in Hagerstown, Md., on Wednesday, Dec. 7, 2016. He says he opposes Congress suspending a requirement for truckers to take two nights off to rest after a work week of up to 75 hours. He says the rule ensures that drivers get needed sleep. (AP Photo/David Dishneau) (AP)
--

The American Trucking Associations is vowing to come back next month, when both the White House and Congress will be under Republican control, and seek to block state laws that require additional rest breaks for truckers beyond what federal rules require. The association says there should be one uniform national rule on work hours for interstate truckers.

The trucking industry's latest win has sparked concern among safety advocates that it may be just the start of a broad rollback of transportation safety regulations once there's no longer a Democratic president to check the tendency of Republican lawmakers to side with industry.

"Unfortunately, it's going to be an open season on safety in this coming Congress," said Jim Hall, who was chairman of the National Transportation Safety Board during the Clinton administration.

Besides pre-empting state laws on rest breaks, it's also likely that shippers and some segments of the trucking industry will push for long-sought goals of increasing the weight limit on trucks to more than 90,000 pounds and increasing the length of individual trailers from 28 feet to 33 feet, safety advocates said.

"It's going to be very tough because the companies really care about the cost. They don't care about the safety no matter what they say," said safety advocate Joan Claybrook.

The provision Republicans added to a must-pass government spending bill this week suspends regulations issued by the Obama administration requiring truckers to take two nights off to rest after a work week of up to 75 hours.

Truckers are required to take a 35-hour break after at the end of a work week. But the trucking industry objected to requirements that the 35 hours include two periods from 1 am to 5 am. Sleep scientists say rest during the early morning hours is critical for people to feel refreshed. The suspension means truckers can head out on the road again during those hours if the 35-hour break has elapsed.

Another regulation that prevents truckers from working 75 hours, followed by a 35-hour break, and then resume driving again in the same week was also suspended.

Truck driver Bill Varnado, 66, of Dallas, Georgia, said he likes the sleep requirement because it ensures that drivers are well-rested. He said it's hard to find places to sleep in one's rig on the road, so drivers sometimes keep going.

"Sometimes you're forced to drive fatigued because you can't find anywhere to park," said Varnado, who drives for Pro Trucking Inc. of Acworth, Georgia, during a truck-stop break along Interstate 81 here.

"I don't see how the government can tell you when to sleep and when not to," Lafferty said during a truck-stop interview along Interstate 81 after dropping off a load of yeast at a livestock-feed plant.

"A driver should know when he's fatigued or not," he said. "If you're fatigued, take a half-hour, hour nap."

Besides truck safety, Congress is also likely to be asked to deal with a wide range of other transportation safety concerns.

The auto and technology industries, for example, are telling Congress that they fear a "patchwork" of state safety laws will hinder the deployment of self-driving cars. National Highway Traffic Safety Administration officials have developed voluntary guidelines for the safe design, development, testing and deployment self-driving cars that they want automakers to follow. But California's Department of Motor Vehicles wants to make the guidelines mandatory.

Some industry officials have complained the guidelines go too far and may stifle innovation. Safety advocates say they don't go far enough.

"We think it would be completely inappropriate for Congress to pre-empt the states without strong federal safety standards in place for automated vehicles," said William Wallace, a policy analyst for Consumers Union, the policy and mobilization arm of Consumer Reports.

"States are the ones that make the final call on whether automated vehicles should be allowed on the roads," he said. "We think citizens of those states have the right to take action to keep their roads safe."

From The Wires Safety Regulations Trucking