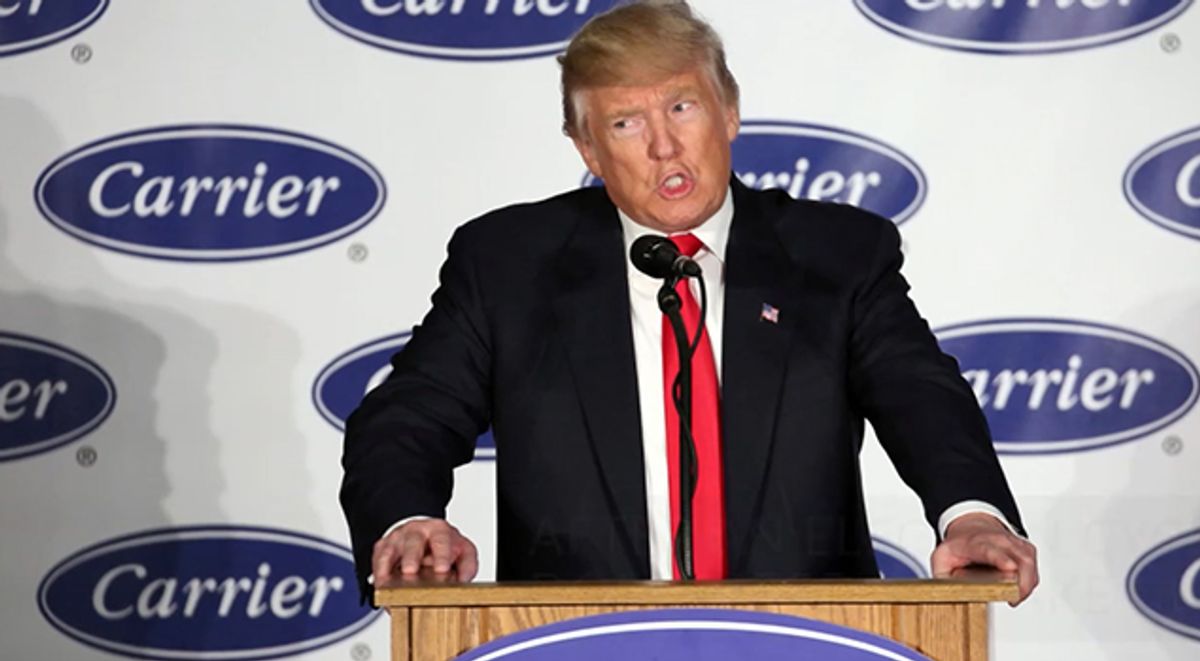 Sixty percent of voters say that they view President-elect Donald Trump in a more positive light after he and Vice President-elect Mike Pence negotiated a deal with United Technologies to save 1,100 jobs at the Carrier air conditioning plant in Indianapolis last week. According to a Morning Consult/Politico poll released Tuesday, after the Carrier deal, a majority of voters approve of the president and vice president working directly with private companies on a case by case basis. However, only 32 percent of Hillary Clinton voters' opinions of the president-elect improved.

A majority (56 percent) of voters overall answered that they approved of the president privately negotiating with companies. The number was a whopping 75 percent for Republican voters. The results come from a national online poll of 1,401 registered voters.

Trump and Pence privately negotiated with United Technologies, the parent company of Carrier, in a deal that resulted in giving $7 million in incentives and tax cuts to the company over the next decade.

"Companies are not going to leave the United States anymore without consequences. Not going to happen. It's not going to happen, I'll tell you right now," Trump said in his speech in Indianapolis last week. He followed up on the statement in a series of Sunday tweets, writing that he would reduce taxes and regulations on businesses and that a companies will be penalized with a 35 percent tax if they move to Mexico.

The U.S. is going to substantialy reduce taxes and regulations on businesses, but any business that leaves our country for another country,

fires its employees, builds a new factory or plant in the other country, and then thinks it will sell its product back into the U.S. ......

without retribution or consequence, is WRONG! There will be a tax on our soon to be strong border of 35% for these companies ......

wanting to sell their product, cars, A.C. units etc., back across the border. This tax will make leaving financially difficult, but.....

these companies are able to move between all 50 states, with no tax or tariff being charged. Please be forewarned prior to making a very ...

expensive mistake! THE UNITED STATES IS OPEN FOR BUSINESS