You're Hired? Inside the interviews as Donald Trump picks his Cabinet

Donald Trump leads the interview, with Steve Bannon and Reince Priebus joining in 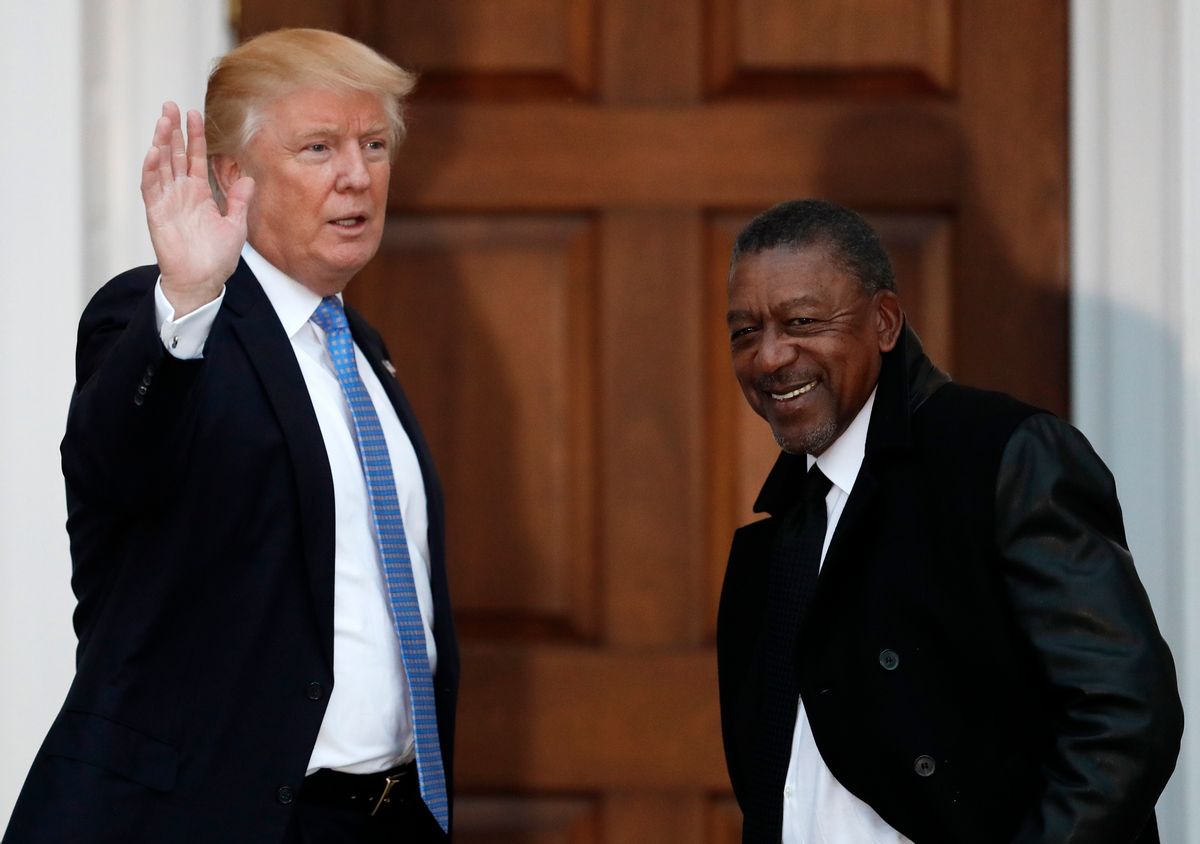 FILE - In this Nov. 20, 2016 file photo, President-elect Donald Trump stands with BET founder Robert Johnson at the Trump National Golf Club Bedminster clubhouse in Bedminster, N.J.. Johnson is one of dozens of people who have paraded into Trump’s properties in New York and New Jersey in recent weeks for job interviews and other consultations with the Republican. Several described the meetings as serious, yet conversational, with the president-elect leading the discussion and asking questions extemporaneously, without consulting notes. (AP Photo/Carolyn Kaster, File) (AP)
--

WASHINGTON — When Robert Johnson, the founder of Black Entertainment Television, arrived to a recent meeting with Donald Trump, the president-elect greeted him with a blunt question.

"Did you think I was going to win?" Trump asked.

The entertainment mogul, who has known Trump socially for years, offered an honest and candid response: "No," he said, drawing a smile from Trump.

Johnson is one of dozens of people who have paraded into Trump's properties in New York and New Jersey in recent weeks for job interviews and other consultations. Several described the meetings as serious, yet conversational, with the president-elect leading the discussion and asking questions extemporaneously, with few notes in front of him.

Senior adviser Steve Bannon and incoming White House chief of staff Reince Priebus sit in on most of the interviews, occasionally jumping in with their own questions. Jared Kushner, Trump's son-in-law, has also participated in some of the discussions. The meetings, which run up to an hour, are bare-bones affairs, with glasses of water the only refreshment offered.

"It wasn't a cookies and cream kind of deal," said Sonny Perdue, the former Georgia governor who is in the mix for Trump's Agriculture secretary. "It was a business meeting, with a CEO interviewing an applicant for a job."

In the month since his victory, Trump has announced picks for about half of the Cabinet, assembling an eclectic group of political insiders, wealthy financiers and campaign loyalists. He's moving at a faster clip than President Barack Obama, who ran a more traditional and secretive selection process, assigning teams of lawyers to pour through potential nominees' backgrounds and carefully guarding the names of those being interviewed.

Trump, a one-time reality television star, is carrying out his process with a showman's touch, at times even deliberating about his choices publicly. Interviewees walk past a gaggle of journalists assembled in the lobby of Manhattan's Trump Tower or on the driveway of his Bedminster, New Jersey, golf club before being whisked into their meetings.

The Manhattan meetings take place in the president-elect's business office, which features an expansive view of Central Park. Trump sits behind his desk, surrounded by memorabilia and stacks of reading material, the walls dotted with magazine covers and other photos of the real estate mogul.

John Allison, the former chairman of BB&T Corp. who was invited to interview for Treasury secretary, said he was not asked to submit any personal or financial information to Trump's team ahead of the interviews. Still, he said Trump and his senior team had "obviously researched my background."

Others who described their interview process to The Associated Press said they, too, were not asked by Trump's team to provide vetting information, raising questions about how the candidates' background and financial ties are being scrutinized. Trump advisers did not respond to inquiries about the extent of the vetting process.

Perdue, who was also not asked to submit any personal information, said it appears Trump is interested in the public's reaction to his potential picks and the issues that surface in the media after their meetings.

"I think they kind of slowly let this stuff out to see what bubbles up," Perdue said. "That's part of the process."

Vice President-elect Mike Pence, who is running Trump's transition, has helped arrange some of the meetings, but is not sitting in on all of them. Those who are invited to meet Trump arrange their own transportation, including secretary of state candidate Mitt Romney, who was spotted waiting in a taxi line at New York's John F. Kennedy airport.

While most of Trump's meetings have been held in Manhattan, Romney's first meeting with the president-elect took place at the Bedminster golf club. Johnson, the BET founder, also met Trump there, huddling with his longtime acquaintance in a conference room on the property.

Johnson said Trump quickly cut to the chase, asking if he would be interested in joining the Cabinet. Johnson said he didn't have any interest in working in government but did want to offer his views on issues related to black voters.

"It ended with me telling him, 'I want to be helpful to you if I've got an open door to make my case that I think are in the best interests of African-Americans,' Johnson said.

Allison said his interview focused on economic policy, including taxes and regulation and the Dodd-Frank Wall Street reform bill, which Trump vowed to dismantle during the campaign. However, Allison said Trump now appears more focused on a major restructuring of the legislation during their hour-long discussions.

"We agreed that while it would be good to repeal Dodd-Frank, it would be difficult politically," Allison said.

Following his meeting with Trump, Allison said he spent about 20 minutes with Steve Mnuchin, who ran the Trump campaign's finance operations. Trump ultimately picked Mnuchin for the Treasury job, the one Allison had come in to discuss.

Allison also learned he'd been passed over for the job from Mnuchin. He left him a message with the news.