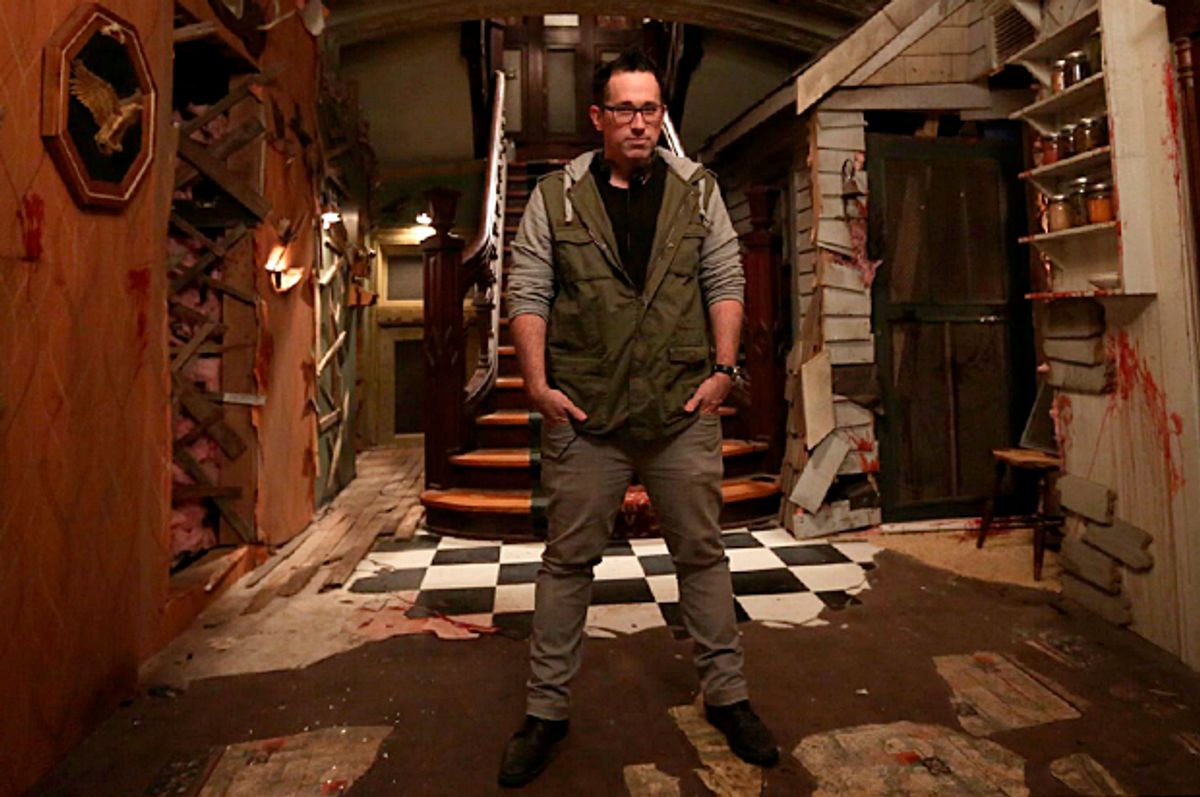 Darren Lynn Bousman, best known for directing three installments of the “Saw” series (“Saw II,” “Saw III” and “Saw IV”), has a new film in release, “Abattoir.” The film is a spinoff from his six-part graphic novel of the same name.

The screenplay, which has a noir sensibility (despite the horror-film title), has ambitious real estate reporter Julia Talben (Jessica Lowndes) hankering to write about crime for her metropolitan newspaper. She unexpectedly gets the chance to investigate a real estate-themed crime when her sister (Jackie Tuttle) and her family are brutally murdered.

Julia and her quasi-boyfriend Declan Grady (Joe Anderson) discover the bloodbath is one of several instances when the entire room of a murder scene has been removed from the house where it happened. Who is committing these heinous and strange crimes? Julia and Declan travel to her hometown of New English to find out. They meet the peculiar Jebediah Crown (Dayton Callie) and discover a house of horrors.

Bousman creates an effective atmosphere, from the 1940s style of the apartments and urban newspaper's offices to the technical wizardry of the ghosts and horrors that lurk in the haunted house at the climax. Moreover, while “Abattoir” is at times as bloody as its title suggests, Bousman is deliberate about how much violence he shows on-screen. He excels at creating a sense of dread rather than emphasizing the gore.

The filmmaker spoke with Salon about his film and what scares him.

So what made you get into horror films? Do you like to shock, surprise, excite or gross out audiences?

Horror to me is more memorable than any other genre. We go through our lives and feel stressed and laugh and cry. We don’t feel fear as much, and fear stays with you more than comedy or drama does. We are used to feeling those emotions. Terror and disgust are shocks to the system. Growing up, I can look back at times when I was scared or thought I was going to die. I don’t remember times that were funny as well.

What inspired you to write the graphic novel and make this film, which are two very different stories featuring the same villain?

I think I’m experimenting in telling stories in a cross-platform — telling different parts of a story in different genres. For “Abattoir,” I had this idea and I pitched it, and I realized the pitch was too much mythology. So we told part of it in graphic novel format, part in TV and part in a movie.

That was my way of telling different parts of the story — like an origin story in the book — and then [something else in] the movie. The book is one story. The movie is another story in that universe. One of the cool things is that the comic is an introduction to the world, the mythology. The look and aesthetics are everything. The comic made me focus on the frames of reference we were trying to create.

What observations do you have about creating a villain like Jebediah Crone?

To me, you have to love your villain. If you look back in cinema, you love the villain in “Silence of the Lambs” or “Saw.” You understand them. At the heart of Jebediah, he is doing this [evil] for the right reasons, which is love. You have to have a great villain. Jigsaw in “Saw” was killing people because they were wasting the opportunities in their lives.

Ironically, we created “Abattoir” for Dayton Callie. He was my archetype. In the first season of “Deadwood,” his character [Charlie Utter] always stayed with me. Then I saw him [as Chief Wayne Unser] in “Sons of Anarchy” and worked with him on “The Devil’s Carnival.” He was a character actor who could play anything, so I really wanted him to be intimidating and soft-spoken.

But he has a way with words. This, in the wrong hands, wouldn’t have worked. One thing we struggled with was how much we show of Jebediah. I didn’t want to see him a lot but to show him sparingly — that makes him more of a mystery. The comic book was just setting up the mystery. I wanted to take the audience on a journey that they never knew what was going on. I never wanted Jebediah to show his whole hand too soon.

You play into some tropes and stereotypes in the film, such as the 1940s era hard-boiled cop and reporter, but also the small-town folks, like the sheriff in New English. Can you talk about the characters and how you imagined them?

I interjected the tropes of noir in a modern-day film with cellphones and computers, but the characters chose to live in arcane dialogue and dress. I [personally] use typewriters and have old clothes. My office looks like a detective novel. I wanted to show that coolness to a modern audience.

Many horror filmmakers have a moral they are trying to get at in their extreme work. For “Abattoir,” that moral seems to be closure. Julia is investigating the crime and seeking info on her family. Do you believe in closure?

For me it’s a couple of things. Closure is a big part of it. But taking it step further, it’s moving forward and not looking back at what could have been or mistakes we made. The reoccurring theme in the film is always look forward, don’t get caught in the past.

Jeb says double entendres. Audiences misconstrue things. When Julia shows up, he says, “Don’t walk through the doors. Your future is behind you.” He gives her every opportunity not to continue. And yet, her need for closure, to put a button on the end of this, leads her [to investigate]. The message is be present and be in the moment. Julia can’t change her sister’s and her family’s death. There is no closure. I’m in a stage in my life to live more in the present.

Much of “Abattoir” is surprisingly talky. Can you discuss the slow-burn approach to drawing out suspense and developing the plot and characters?

I’m a horror director. It’s a talking head movie. People expect it’s a slaughterhouse film because of the connotations of the title. I wanted to make a throwback to fast-witted dialogue and films where the dialogue is the star. That was the challenge and fun of creating the story.

There are some very violent scenes in the film, but you are careful about how much you show. Can you talk about your restraint in depicting violence and how you decide what to show?

The film’s downfall will be the lack of violence. When you hear “Saw” and “Abattoir” and see the trailer, people expect “Abattoir” to be a more visceral film than it is. But I wanted to make a film that didn’t have the same degree of violence of my other films. I wanted the violence to be an afterthought. Now that I’m a father, I have an aversion to children being killed. So that scene [of Julia’s nephew being killed] happened offscreen.

We watched the first cut of the film and some scenes were missing violence. The first cut was a series of talking heads. So the producers asked me to up the violence. I went back to shoot some of the graphic scenes in the first 20 minutes. I was trying to find that balance to satisfy noir and horror.

What can you say about imagining the film’s ghosts and bringing them, so to speak, to life?

That was the biggest nightmare of my life! We had a different version of the ghosts we shot. There were a lot of tracking shots; I didn’t do coverage. That astronomically shot up the budget. And at the end of a four-and-a-half-minute tracking shot, we had to rethink the idea, given what we shot and the budget we had. What we are left with is what we did.

Before we started filming, I thought, Can I do this without ghosts? I became so in love with the dialogue that I was like, Are ghosts going to cheapen it? Should I keep it just as film noir murder mystery? I opted not to. “Abattoir” is special because of the mishmash of genres. Adding the ghosts helped that.

One of the key lines for me in the film is “There is nothing more dangerous than someone who’s afraid.” What can you say about creating fear?

That’s a hard one. Creating fear . . . I don’t know if I can comment on that. Everyone has something different that they are scared of. I have to look at what upsets me, as a parent and filmmaker and hope it connects with them and me.

What are you afraid of?

The safety bubble I live in bursting. The world I created with my wife and son and creating films. I have this very amazing life, and I am scared of waking up and having something happen — that I can’t make a film or be with my family. It’s the loss of control. Spiders and men in masks don’t scare me. It’s all emotional things. That’s the older wiser guy who’s making this movie.

I just wrapped a yearlong work [for] "The Tension Experience," a site-specific experience that is about disconnecting from cellphones and having human interaction. We’re losing ourselves to things that control us and move us. I’m concerned about losing human interaction. Can you be somewhere without checking your phone? That’s happening to the world. People are scared about losing the ability to be present. We’re becoming zombies, literally.