Conservatives like the Electoral College more than California's voting habits, for some reason 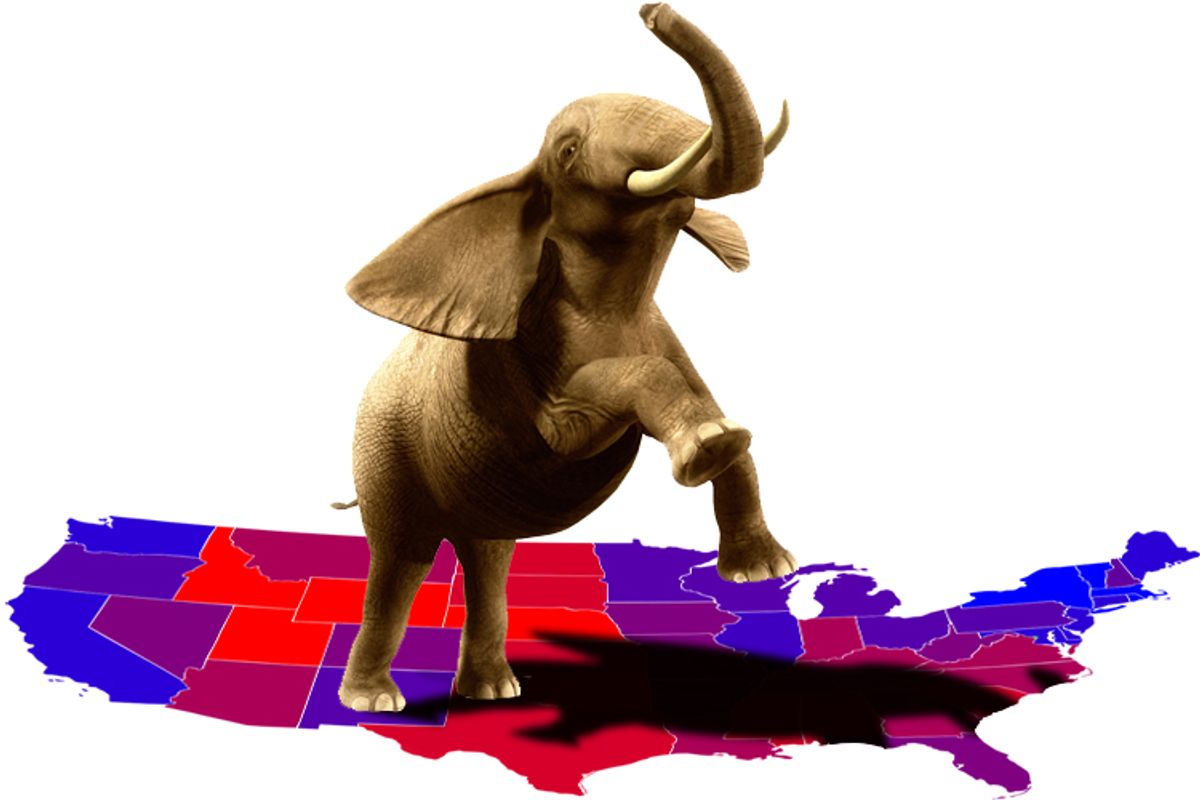 Activists seeking to reform the process by which Americans elect a president are facing some of the strongest opposition in decades, led by supporters of President-elect Donald Trump, who falsely believe that millions of illegal votes were cast against the Republican nominee, and he still won the popular vote.

In 2011, 54 percent of Republican voters wanted a popular vote system to elect the president — adding to the clear majority of Americans who supported amending the U.S. Constitution to replace the Electoral College with a popular vote system. But after Donald Trump's stunning Electoral College victory last month, Gallup found that only 19 percent of Republicans still support it — leading to a historic low of support amongst all voters. Republicans rapid decline in support for an electoral process more reflective of the “one person, one vote” democratic principle comes even as Trump himself seemingly endorsed a popular vote count model.

“I would rather see it where you went with simple votes,” he said in a post-election interview with CBS’ “60 Minutes.” Trump said, “you know, you get 100 million votes, somebody else gets 90 million votes, and you win. There’s a reason for doing this because it brings all the states into play ― [the] Electoral College ― and there’s something very good about that. This is a different system, but I respect it.”

But even as Clinton is likely to overtake President Obama's historic 2012 popular vote total of 65.9 million, as absentee ballots from states like California and New York continue to roll in, nearly a third of Republicans still don't know that she received more votes than Trump. According to Public Policy Polling, 40 percent of Trump voters incorrectly insist that he actually won the national popular vote.

Perhaps that is due to right-wing news sites like the Daily Caller declaring that "the popular vote is a hoax." Maybe the right-wing website run by Trump's chief aide Stephen Bannon, Breitbart, plays a role when it runs headlines like "Donald Trump won 7.5 million popular vote landslide in heartland."

Or perhaps the problem can be traced back to Trump's own false claims that millions of people illegally voted, costing him the popular vote:

Since Trump's post-election misinformation campaign on Twitter, the Washington Post reports that there's also "been a push to isolate as an anomaly the results in California — where Clinton's margin of victory alone would give her the national popular vote victory."

The American Enterprise Institute argued that Hispanic and Asian immigrants who vote more Democratic "have put California increasingly out of line with the national average" to argue in favor of keeping the Electoral College.

"In a popular vote system, the voters of this geographically distant and culturally distinct state, whose contempt for heartland Christians resembles imperial London’s disdain for the “lesser breeds” it governed, could impose something like colonial rule over the rest of the nation," AEI's Michael Barone recently wrote.

It should come as little surprise then to see that new polling found that only 53 percent of Trump voters thought California's votes should count to the national total.

But while the debate about the Electoral College suddenly becomes entrenched in partisan politics following the election of Trump, Democrats and activists are still hopeful that a state-led movement can lead to change.

On Tuesday, a new nonprofit called on President Obama to endorse the National Popular Vote initiative, which has already been enacted into law in 11 states — all blue ones, totaling 165 electoral votes — before he leaves office. If states with 105 more electoral votes enact the law, it will take effect nationally.

“I don’t think we can sustain our American democracy by having the majority ruled by the minority,” California Democratic Rep. Zoe Lofgren recently told the Huffington Post, adding that the areas Clinton won "encompassed a massive 64 percent of America’s economic activity."

A group of Democratic lawmakers in the House, hailing from states like California, New York, Virginia and Texas met this week to chart out a solution. The 2016 election marked the fifth time the winner of the popular vote lost the U.S. presidential election in the nation's history. In 2000, Democrat Al Gore won the popular vote by 543,816, the previous record.

Other presidential hopefuls who won the popular vote but lost the election include Democratic-Republican Andrew Jackson in 1824, Democrat Samuel Tilden in 1876 and Democrat Grover Cleveland in 1888.