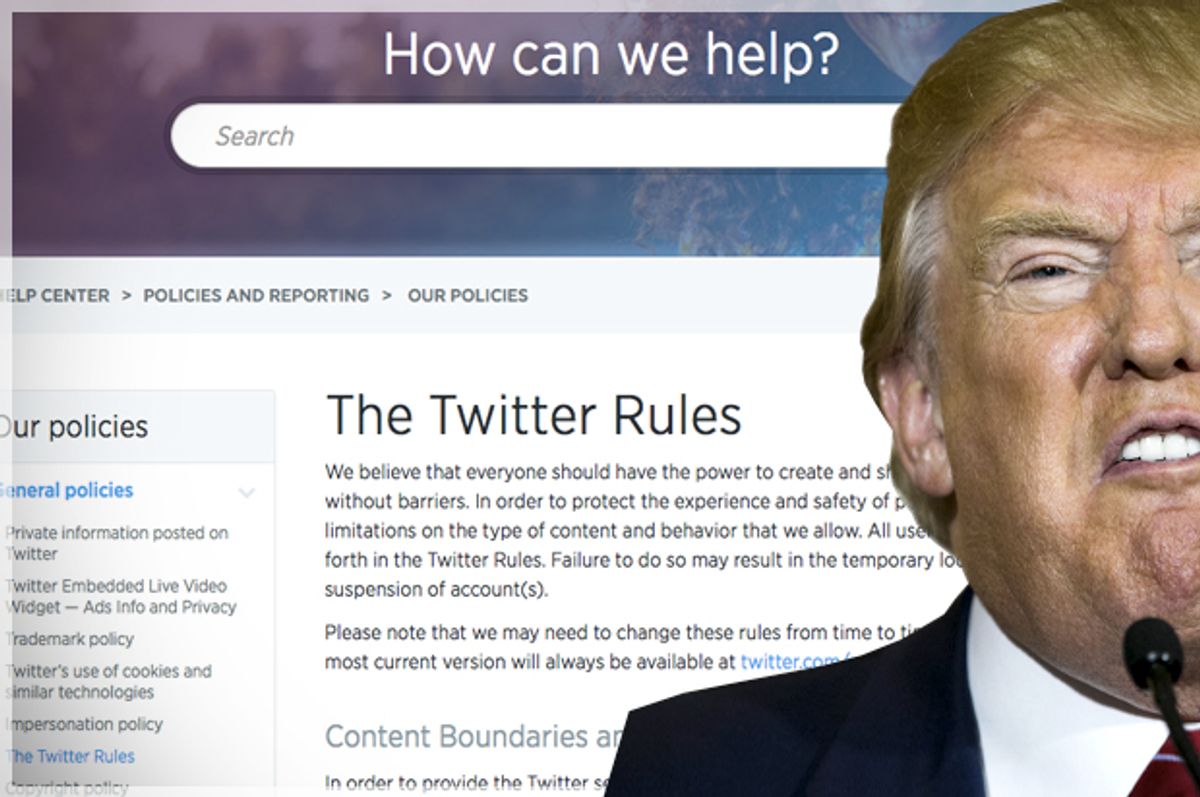 The most recent example came on Wednesday night, when Trump unleashed his rabid Twitter followers on Chuck Jones, a local union leader in Indiana who represents Carrier employees.

Not even 30 minutes after Trump's tweet, Jones started to receive phone calls from hostile Trump supporters. “Nothing that says they’re gonna kill me, but, you know, you better keep your eye on your kids,” Jones said on MSNBC. “We know what car you drive. Things along those lines.”

Trump's antics on Twitter have raised questions about targeted abuse and harassment on the social platform.

According to Twitter's rules, a user "may not incite or engage in the targeted abuse or harassment of others." The rules list certain factors Twitter considers when evaluating reported accounts:

Trump's tweet directed at Jones was not the first time he has targeted a specific individual. Since announcing his candidacy, Trump has attacked 135 people on Twitter, an ongoing review by The New York Times found. But the subjects of Trump's tweets are typically public figures — politicians and members of the media. When Trump singled out a local union head from Indiana, he marked a private citizen as the potential target of abuse and harassment. Twitter's rules do not delineate between public and private individuals, so Jones' status as a private figure does not render Trump's tweet more illicit than his other 140-character grievances.

Twitter blankly prohibits users from inciting harassment and threats of violence against others. The company has cited this rule as a cause to suspend alt-right prince Milo Yiannopoulos. In a statement provided to BuzzFeed News at the time of Yiannopoulos' suspension, a Twitter spokesman wrote:

"People should be able to express diverse opinions and beliefs on Twitter. But no one deserves to be subjected to targeted abuse online, and our rules prohibit inciting or engaging in the targets abuse or harassment of others."

Trump would likely argue that he is not responsible for his overzealous followers who threatened Jones. But he can't say he was unaware of the potential backlash. As BuzzFeed's Charlie Warzel notes, the president-elect appears to know the consequences of his tweets.

Fox News anchor Megyn Kelly wrote in her recent memoir that Trump once told her: "I almost unleashed my beautiful Twitter account on you, and I still may." Trump eventually tweeted about Kelly, which resulted in death threats, stalkers, and vitriol from the alt-right. The notion that Trump could not foresee the response against Jones is naive at best, disingenuous at worst.

The reason Trump has avoided a Twitter suspension could be due to the fact that Jones is not on Twitter. The rules state that abusive behavior includes (with emphasis added): "inciting others to harass another account." Because Jones does not have an account, Trump may be escaping repercussions thanks to a technicality.

One thing is for sure: Trump is now on notice. Since Jones reported threats against him, another private citizen shared the same experience. In October 2015, Lauren Batchedler, then an 18-year-old student, was the victim of a malicious Trump tweet.

The arrogant young woman who questioned me in such a nasty fashion at No Labels yesterday was a Jeb staffer! HOW CAN HE BEAT RUSSIA & CHINA?

After the tweet, Batchelder reported that she received phone calls and Facebook messages that threatened rape and violence. Trump's followers had posted Batchelder's phone number and other personal information online.