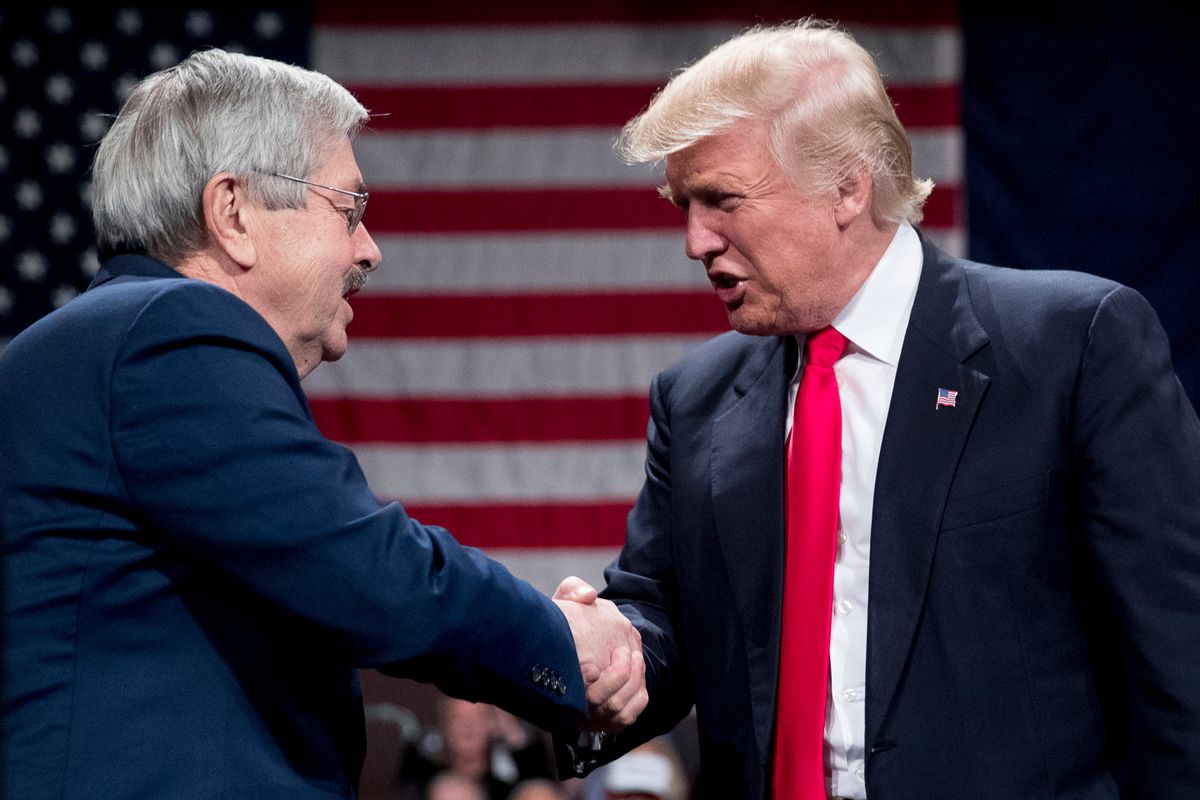 NEW YORK — Tending to party politics, President-elect Donald Trump is rallying supporters in Louisiana on Friday ahead of the state's Senate runoff election, aiming to pad the Republican majority he will inherit.

Trump was campaigning for Republican John Kennedy in Baton Rouge, Louisiana, and then making another stop on his "thank you" tour in Grand Rapids, Michigan, a state that helped him prevail against Democrat Hillary Clinton in last month's election.

On Thursday Trump met in Columbus, Ohio, with the victims of an attack by a knife-wielding Ohio State University student. By evening he was at a rally in Des Moines, Iowa, alongside Iowa Gov. Terry Branstad, his pick to be the next ambassador to China.

"The script is not yet written. We do not know what the page will read tomorrow. But for the first time in a long time we know the pages will be authored by each and every one of you," Trump said at Des Moines' Hy-Vee Hall, where he offered promises to heal a divided nation along with trademark boasts about the size of his victories.

While candidate Trump was often at odds with the establishment wing of his party, the incoming president has reason to consolidate any lingering factions within the party, most immediately in Louisiana.

Kennedy, the state treasurer, faces off Saturday against Public Service Commissioner Foster Campbell, a Democrat, for the seat of retiring Republican Sen. David Vitter. Neither won a majority in the November primary, leading to the runoff. Polls have shown Kennedy with a comfortable lead.

Republicans will have a narrow 52-48 Senate majority next year if they maintain the Louisiana seat. Trump has backed Kennedy and Vice President-elect Mike Pence campaigned for him last week in New Orleans, saying a Kennedy win would "put an exclamation point at the end of a great American victory in 2016."

Yet even as he professes unity, Trump's Cabinet announcements have drawn harsh criticism from Democrats.

Trump's selection Wednesday of fast-food executive Andrew Puzder to lead the Labor Department was panned by workers' rights organizations and labor unions. Puzder, who heads CKE Restaurants Holdings, the parent of Carl's Jr., Hardee's and other chains, brings yet another wealthy business person and elite donor into his administration-in-the-making.

Trump said in a statement that as labor secretary, Puzder will "save small businesses from the crushing burdens of unnecessary regulations that are stunting job growth and suppressing wages." He later defended his decision to stack his Cabinet with the extremely wealthy, saying in Des Moines: "I want people who have made a fortune! Now they're negotiating for you!"

But the choice could lead to a confirmation fight.

"American families need a Labor Department that stands up for workers' wages, retirement security and safety, not one focused on reducing their pay. Andy Puzder has a long record of fighting against the wages of working families," said House Democratic leader Nancy Pelosi of California.

Trump has selected retired Marine Gen. John Kelly to head the Department of Homeland Security, according to people close to the transition; he officially picked Oklahoma Attorney General Scott Pruitt, a climate-change denier whose policies have helped fossil fuel companies, as head of the Environmental Protection Agency; and he named the former chief executive of World Wrestling Entertainment, Linda McMahon, to head the Small Business Administration.

Pruitt, whose selection demoralized some environmentalists and Democrats, came not long after Trump met with former Vice President Al Gore, a leading environmental activist, and said he had "an open mind" about honoring the Paris climate accords.

Trump, in Iowa, vowed to that he would "end the EPA intrusion into your lives," prompting cheers from the crowd.

Major decisions remain on the horizon for Trump.

Trump is also determining the future of his business empire, which he has said he will leave although he could shift control to his adult children. Business-ethics specialists have said that type of arrangement could carry enormous conflicts of interest.

Trump has not yet provided any details on how his business interests will function while he's in the White House but said legal documents are being prepared ahead of an announcement next week.

It was also revealed Thursday that even after Trump moves into the Oval Office, he will retain an executive producer credit on the reality show "Celebrity Apprentice." The news, which was first reported by Variety, raised questions about a conflict of interest since Trump will have an interest in a show broadcast on NBC while he is being covered by the network's news division.

The show will now be hosted by Arnold Schwarzenegger. Requests for comment were not returned by Trump's spokeswoman.