What's that, you say? There were 43 other white guys before him? Yeah, OK — but not like this 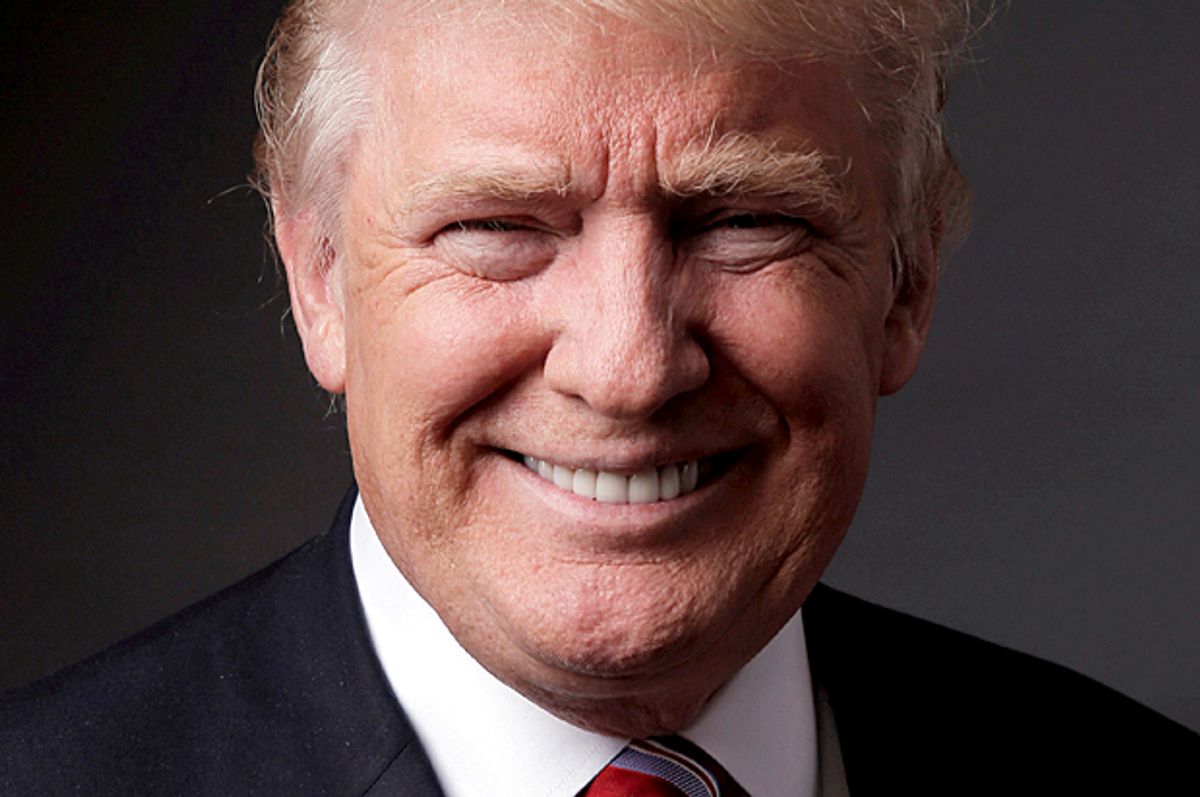 For the first time in American history -- OK, maybe the second time -- a presidential candidate's race played a central role in his campaign, and is one of the key factors that got him elected.

Donald Trump will not be our first white president. (Or our first male president either.) By my informal count we've had 43 others, in an unbroken line from George Washington in 1789 to George W. Bush in 2009. Not only were all the presidents elected during that stretch white guys, the runners-up were all white guys too (as were the third-place finishers, on the occasions there was one).

But something has shifted. Donald Trump will be our First White President, in almost exactly the same sense that Barack Obama has been our First Black President. Trump is the first president defined by whiteness, the first whose glaring and overwhelming whiteness is a salient issue that lies at the core of his appeal. Trump is a symbol of whiteness as self-conscious political power, in a way that none of those 43 other dudes even approaches -- not even Ronald Reagan, the proto-Trump and whitest of all previous presidents. Trump is the president who inaugurates the era of white identity politics, the president who stands for the wounded and embattled white minority (even though it is not a minority).

Let’s observe right here, before we really get started, that race is a social construction with no definite genetic or scientific meaning. In fact, it’s a modern social construction; as far as anyone can tell, no such concept existed in the ancient world. (The Roman Empire viewed outsiders and “barbarians” with a baleful eye, for instance, but skin color didn’t enter into it. A number of prominent Roman generals and high officials were of African origin.) So the notion that Trump is white and Obama is black is nothing more than a story we all agree to tell ourselves. It seems to explain certain things, but its underlying meaning escapes from us. Especially since Donald Trump is actually orange, and Barack Obama grew up among white people and Asians, with virtually no connection to his African ancestry.

Moving on: One could respond to my First White President thesis, and no doubt many people will, by saying that it’s ridiculous. On some levels it is. We had nothing but white presidents for more than 200 years, several of whom were more overtly racist than Donald Trump. (Though that's admittedly a high bar.) Trump’s defenders may wish to argue that he didn’t explicitly run as a candidate of whiteness. One has to hope they only get halfway through that sentence before falling silent in shame.

It clearly isn’t true that only white people voted for Trump; perversely enough, he seems to have done slightly better among blacks and Latinos than Mitt Romney did in 2012. But anyone who believes that people of color are inherently immune to the power of whiteness, or are incapable of being conquered by it or distorted by it -- well, nobody believes that. Spend 10 seconds gazing into the bland, bottomless void behind Ben Carson’s eyes, and you can’t possibly believe it. To repurpose Nietzsche’s famous maxim, sometimes it’s scarier when the abyss doesn’t stare back.

From another point of view, we've had nothing but white identity politics (and male identity politics), even if it never occurred to anybody to call them that. We had white male candidates and white male presidents; we had an electorate that was exclusively white and male until the 1860s, exclusively male well into the 20th century and predominantly white until the late 1960s.

Furthermore, it's not like white male identity politics were never visible as such during those years. Pro-slavery politicians of the Civil War era often hinted darkly that the end result of emancipation was sure to be black social and political equality, blacks who voted and even blacks who sat in legislative chambers wearing coats and ties, right next to white men. (Abraham Lincoln hastened to assure them he had no such end in view.) Even in those nightmare scenarios, I’m not sure anyone imagined a black president, or the nature of a future America that might elect one. Some things were too outrageous even to be shocking.

Setting aside such episodes of racial panic, for the first two centuries or so of American history the fundamental whiteness of politics and power were simply atmospheric conditions, rarely noticed and barely worth talking about. At least until now.

Don’t get me wrong: I don’t think African-Americans failed to observe the power of whiteness, any more than women were fooled by reassurances that wielding power in the home suited their temperaments much more than wielding it in Congress. But for white people in general, the whiteness of political power was either invisible, irrelevant or a shameful secret to be jealously protected. George Wallace, another proto-Trump whose 1968 presidential campaign offered one of the first signs of white anti-Establishment restlessness, was just a little too explicit with his racial messaging. His call for “segregation today, segregation tomorrow, segregation forever” became a national embarrassment for white people because it was unambiguous. Whether by strategy or sheer animal instinct, Trump has not made that mistake.

But here’s the point: Wallace styled himself as a leader of the white race and a defender of white tradition, but no one found it noteworthy that he himself was a white man. So were Richard Nixon and Hubert Humphrey and everyone else who tried to run for president in that chaotic year. In this chaotic year, it has become commonplace to say that the Trump phenomenon, culminating with the most bizarre election since (at least) the bewildering debacle of 1876, was driven by sexism and racism. That’s true, but it really doesn’t explain anything. (Nearly everything in American life is driven by sexism and racism to some degree, including “America’s Next Top Model,” the strange status of Major League Baseball and the baffling success of Guy Fieri.)

Trump was running against the first woman to receive a major-party presidential nomination, and running to replace a cosmopolitan biracial black man with a Muslim-sounding name. Those are important facts too, but also insufficient in themselves. Trump was the first presidential candidate to run not merely as a white man pitching himself to other white men -- that remains the norm, if rendered slightly problematic by demographic change -- but as a walking, talking Dionysian celebration of Whiteness and Man-ness, the Ur-white man around whose brilliance other white men cluster like faint and distant stars.

I wrote in this space last week that the Trump electorate had half-consciously voted for an incoherent fantasy of an imaginary American past, perhaps because the American present they inhabit has become so debased. But in one sense the fantasy is pathetically transparent: Behind the wall that will never be built and the mass deportations that will never happen and the factory jobs that will never come back lies a yearning to return to an era when the president was always going to be a white guy and you didn’t need to think about it. It almost seems that along with all the genuine insults and injuries inflicted on the “white working class” by the forces of global capitalism and the so-called coastal elites, the election of Barack Obama inflicted a psychic wound that demanded immediate payback, at almost any cost. And then they were going to elect a girl. It was not supportable.

So now they have Donald Trump, the avatar of white grievance and white resentment. He is the 44th white president, but the First White President to stand for whiteness as a special category, a downtrodden identity group of Dockers and Callaway golf caps and NCAA warmup jackets worn a full size too snug. Unsurprisingly, Trump seems likely to betray that demographic and hand over the keys of government to rapacious zillionaires and right-wing ideologues, like other white-centric Republican presidents before him.

We will all suffer the consequences of that. And the sad, secret meaning behind our First White President and the dawn of white identity politics is that there is no way back to the days of white certainty and white innocence. There will always have been a President Barack Obama; that Kenyan birth certificate never panned out and he will never be erased from the history books. It seems increasingly likely that Hillary Clinton will be viewed in retrospect as the true winner of a fluke election that exposed how dysfunctional our system has become. She isn’t running a child-sex ring out of a pizza parlor, and won’t be locked up or executed by Trump or anyone else.

Of all the lies Donald Trump told to get elected, perhaps the biggest and worst was something he never quite said aloud but became the primary text of his campaign: White male hegemony could be restored, and all racial and sexual doubt and anxiety erased, because on some deep level that was the natural order of things. Isn’t that a correct translation of “Make America Great Again”? But electing our First White President is a dead giveaway that none of that is possible. If the republic survives this particular white president, we may have others in the future. But we will never again have an automatic white president, an invisible white president or a white president that nobody notices is white.