"Moonlight" and "Loving": Film as symbolic resistance in the age of Trump

Stories of love in a season of hate: Two of 2016's best films offer a potent counternarrative to the rise of Trump 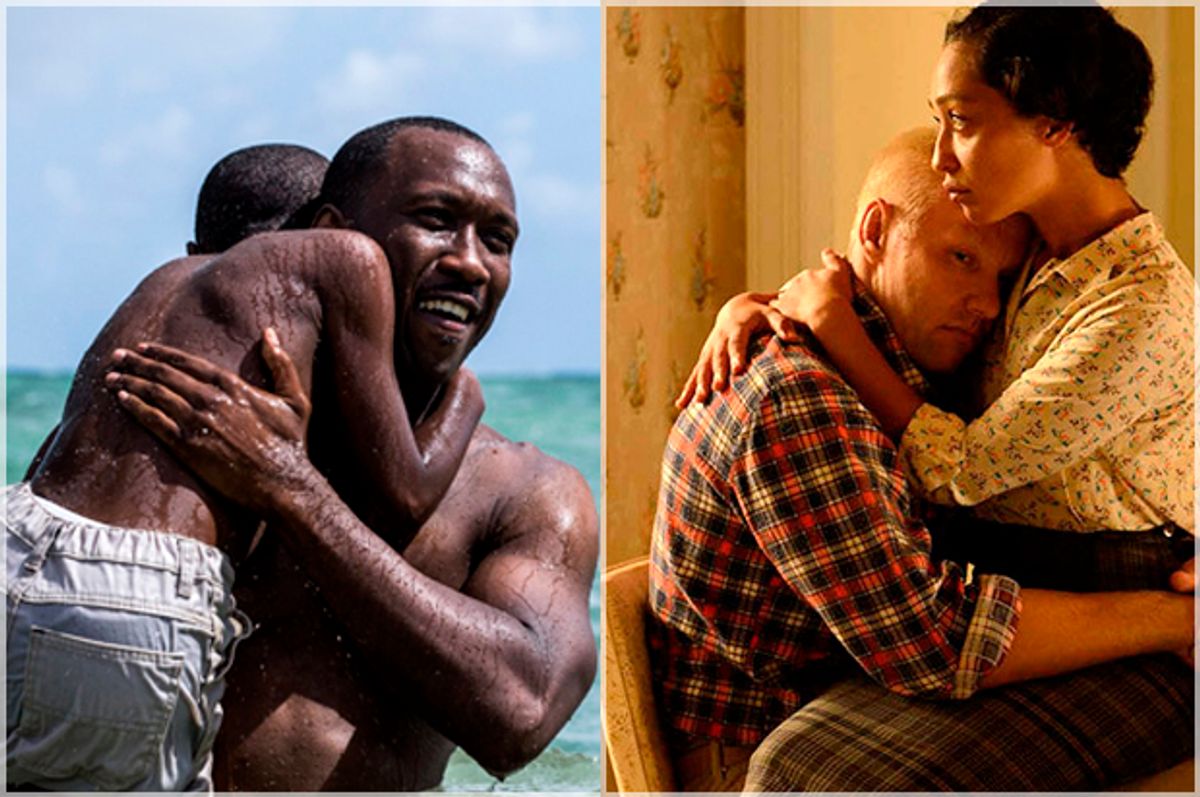 During times of stress and worry I find comfort by watching films. The night before my father’s funeral, I stayed awake and watched the "Star Wars" trilogy. As one of my best friends was stolen away by cancer over the course of a year, he and I revisited the "Star Trek" films and TV shows and debated their merits and minutiae. In these weeks since Donald Trump’s defeat of Hillary Clinton on Election Day in what felt like a horrible crescendo to a wicked and mercurial 2016, I have continued with this life habit, seeking peace, insight and guidance in the movies.

Films are a reflection of a society’s collective subconscious. Films are also social and political documents: They channel a society’s angst and worries, hopes and dreams, and constitute a type of collective biography for a people. If film is ultimately a reflection of the “now,” then the recent releases “Moonlight” and “Loving” are essential, because they offer a powerful counternarrative to the reactionary social and political forces that elected Donald Trump.

In "Moonlight," Juan (played by Mahershala Ali) is a drug dealer but also a deeply caring person who, along with his girlfriend Theresa (Janelle Monáe), provides stability and family for Chiron (Ashton Sanders), the film's protagonist, as his mother succumbs to drug addiction. Chiron finds love and finally learns to accept his sexuality by embracing the intimacy and power that comes from emotional and physical vulnerability.

"Moonlight" is also potent because it subverts the omnipresence of the white gaze — there are few if any white people in the film.

“Loving,” by writer-director Jeff Nichols, explores the lives of two people, Richard and Mildred Loving, and their love affair and subsequent marriage under Virginia’s Jim Crow regime during the 1960s. Richard (played by Joel Edgerton) was a white man; Mildred (Ruth Negga) a black woman. Their marriage was illegal under the state’s slavery-era anti-miscegenation laws. Like Moonlight, "Loving" reminds the viewer that the personal is truly the political by focusing on Mildred and Richard’s relationship and how the two forced the United States Supreme Court to strike down laws against interracial marriage and families as unconstitutional.

"Loving" resonates across the color line by showing how even under Jim Crow interracial communities where black and white folks lived together, loved, and tried to respect each other did in fact in fact exist. Mildred and Richard were not blind to the color line; they simply lived in a community where class and bonds of shared lived experience were more significant. This world, with its values of mutual respect and love between black and white folks, was viewed as a threat by the state of Virginia. For the America of Jim Crow, racism and white supremacy were sane and normal, while people who rejected such values were the insane, the defective and the maladjusted.

Donald Trump’s campaign to “Make America Great Again” is revanchist and reactionary. He has followed through on the toxic white identity politics that attracted his voters by selecting men like Jeff Sessions, Steve Bannon and Ben Carson to join his inner circle. Sessions is an enemy of the black freedom struggle who has allegedly used racial slurs to describe an African-American attorney. He has said that the NAACP is an “un-American” organization and described a white civil rights attorney as a “race traitor,” and has supported laws that would overturn the legacy of the Civil Rights movement across the Unites States. Sessions also opposes full and equal rights for gays and lesbians. Bannon, Trump’s senior adviser, was formerly the head of Breitbart News, a right-wing propaganda website that has served as a mouthpiece for white supremacist and white nationalist ideologies. Ben Carson, who has been designated as secretary of housing and urban development, does not support the basic civil rights protections provided by laws such as the Fair Housing Act.

Trump’s election and the policies he will attempt to put in place are a direct assault on the spirit of human dignity and progress spoken to by films such as "Moonlight" and "Loving." In Trump’s world and those of his supporters, black and brown lives are diminished; the poor are under siege and disposable; gays and lesbians are to be written out of the social contract.

The late film critic Roger Ebert once said that a film reviewer’s first obligation is to communicate how a film made him or her feel. In that spirit, "Moonlight" and "Loving" are deeply moving explorations of human dignity and love in a society and world that often deny people both because of the bodies and social circumstances they are born into. And as I watched a young couple -- an African-American woman and a white man -- cry at the end of "Loving" and leave the movie theater holding hands without fear of stigma or violence, the power of film to uplift and affirm as it creates a sense of community was reinforced for me as well.

Popular culture is a barometer for the public mood. As the age of Trump unfolds, will the meanness and cruelty of this moment be challenged by filmmakers and other artists? Or will the rage and anger that fueled the dangerous allure of Trumpism for the tens of millions of angry white voters who installed him in office — and the feelings of apathy and disaffection that led many more tens of millions of Americans not to vote — encourage a turn in popular culture where it is made even more violent, spectacular, debased and consumerist? A popular culture that only generates “anti-politics” and a culture of cruelty that further normalizes America’s authoritarian present? According to Michael Cieply of Deadline Hollywood, 2016 may end up as the first year in Hollywood history when no movie set in the real world will be among the top 10 box-office hits.

Film is also a kind of moral document. As Trump’s brand of right-wing authoritarianism and bigotry spreads across both America and Europe, it is ever more important for the artist to speak truth to power and not be coopted by it. In these challenging times, films like "Loving" and "Moonlight" are acts of symbolic political resistance, reservoirs of strength for the mobilization and activism that the age of Trump will require.