Pizzagate, explained: Everything you want to know about the Comet Ping Pong pizzeria conspiracy theory but are too afraid to search for on Reddit 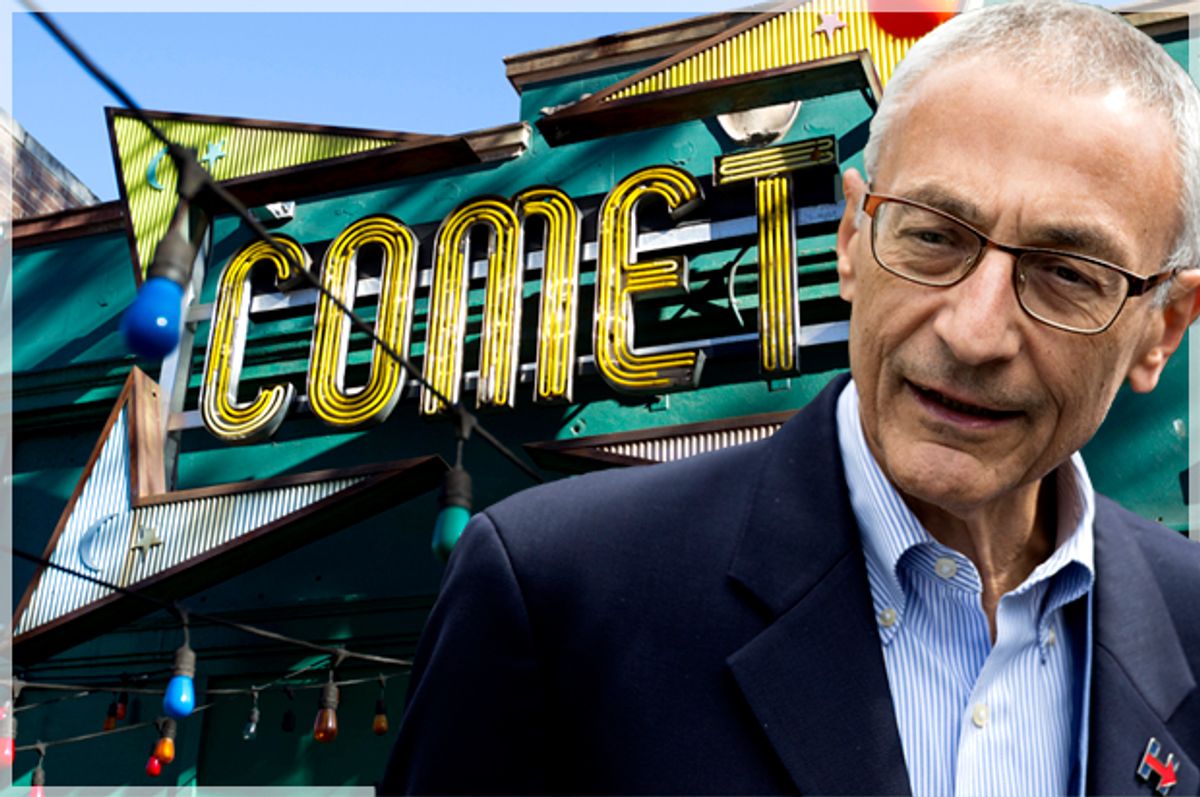 "Pizzagate" seems like too cute of a name for a conspiracy theory that's escalated to the point that an armed man actually drove up the East Coast to "self-investigate" whether a D.C. pizza restaurant had a secret pedophilia dungeon in its basement, ending with him shooting his assault rifle inside the restaurant and being arrested.

But the name stuck. The story seemed like a hilarious curiosity in the weeks before the presidential election. Taking the so-called Pizzagaters seriously seemed about as sensible as taking the possibility of a Donald Trump presidency seriously, and both seemed like relatively safe targets for poking fun.

But just as many expected a return to the rational world after Trump's defeat, only to wake up on November 9 living in Trump's world, this bizarre pizza-pedophilia piece of make-believe seems to have struck the right kind of nerve in this simultaneously gullible and paranoid time to become a lasting, serious concern.

Sometimes a slice is just a slice

Pizzagate started, as so many things have in the last few months, with Wikileaks. When Wikileaks released emails from former Hillary Clinton 2016 Campaign Chairman John Podesta's account, most commentators honed in on the ones showing Clinton allies speaking candidly and sometimes disparagingly about the candidate and her associates, as well as about policies like a federal $15 minimum wage.

But a small number of people on message boards like 4chan and Reddit were more interested in seemingly mundane emails about small social gatherings and parties hosted by Podesta and his friends. Specifically, they noticed that these emails mentioned pizza a few times.

Boldly disregarding the simple explanation that the emailers, like most Americans, eat pizza regularly and find it to be an easy food to serve and eat while socializing, self-appointed Internet detectives decided that "pizza" was a complex code for pedophilia. Using this code, Pizzagaters claim, Podesta and his well-heeled pals could brazenly discuss their plans for throwing disgusting sex parties exploiting enslaved children, in between exchanges about Clinton's campaign strategy and setting up conference calls.

It's important to note that since the theories that would become Pizzagate began on 4chan and Reddit, sites known for trolling people with cruel, complicated pranks, it's likely that many of the conspiracy theory's originators were joking — coming up with absurdities to entertain themselves.

But it took a very short time for /r/Pizzagate, the now-closed Pizzagate-focused Reddit subforum, or subreddit, to fill with people who appeared to be true believers. The theory also became popular on Reddit’s “The Donald,” a hub for Trump supporters. From there, Pizzagate caught the attention of conservative fake news sites, minor white supremacist celebrities, and supporters of Turkish President Recep Tayyip Erdogan. It's been amplified for unknown reasons by Twitter bots traced to the Czech Republic, Cyprus and Vietnam.

Everyone's in on it

The theories grew to engulf pretty much anything that could be linked to Podesta, or anyone who had ever met him. That's how they landed on Comet Ping Pong, a popular family-friendly pizza restaurant in Washington, D.C., that also hosts occasional punk shows. James Alefantis, owner of Comet as well as other nearby restaurants, used to date David Brock, head of a pro-Clinton group, and John Podesta knew Alefantis and ate at the restaurant. If "pizza" is code for pedophilia, the rumor mongers reasoned, clearly a pizza restaurant is the dungeon where all the horrors go down.

Though the whole idea of the conspiracy was clearly unhinged from the start, this is where things became especially personal and frightening. Conspiracy theorists began pouncing on any social media posts involving children, adding foul comments attempting to read abuse into innocent photos.

Threatening phone calls regularly harassed and frightened employees of many restaurants near Comet, and other pizza places in D.C. that theorists decided must be linked to the pedophilia ring because they also serve pizza. Anything they decided looked "creepy" or "wrong" was thrown into the evidence bin without question, from the dark album art of a band that had played at Comet, which they deemed satanic, to an email describing a handkerchief with "a map that seems pizza-related." Even modern-art murals on the walls of the restaurant were implicated. Anyone remotely connected to a piece of so-called evidence became a target for threatening phone calls and social media messages.

In one particularly bizarre incident, a participant in /r/Pizzagate claimed to have hacked the website of a D.C. pizza restaurant called WeThePizza with a friend who was killed or captured in the process, and found an actual menu of child sex services offered, as well as child pornography. Shockingly trusting conspiracy enthusiasts apparently downloaded the files this person provided before realizing that "I was investigating pizzagate" would not be a great defense against criminal child pornography charges, and publicly panicked on the forum.

From scary to violent

It was almost inevitable in this environment, where every mundane detail was twisted into a damning piece of evidence that powerful people were running a child sex ring and the authorities couldn't care less, that someone would decide that violence was an appropriate reaction. And right on cue, Edgar Welch, apparently Internet-addicted and delusional, decided he would drive up from North Carolina and free the children locked up in Comet's basement. Luckily, he was focused enough on his objective to not harm patrons or staff until he had found the children, so he used the threat of his guns to keep anyone from touching him while he shot the lock off a door and generally investigated to his heart's content. After he realized there was nothing to find, he gave himself up to police.

And that's the legacy of this whole mess in the end. Hoaxsters and the deranged collaborated to create a compelling and nonsensical story about depraved, satanic elites operating with impunity. This struck a chord with people who have long seen the mainstream media and politically powerful and well-connected people as manipulative and evil — a public very much like the one that helped carry Trump to victory on a wave of anti-elite sentiment.

And for all their talk of protecting children, the conspiracy theorists are the reason a man with a gun jeopardized the safety of dozens of people, including children and families, on a Sunday afternoon. They are the reason people are combing the Internet for photos of children to project dark ideas of rape and torture onto. They are the reason men and women in D.C. are fearing for their lives when they show up to work at a restaurant. Conspiracy theories like these seem immune to debunking, and if someone really believes there's satanic darkness at the heart of this lie, perhaps there's no measure too extreme for them to take in response.