Do good to be good: How marketing is changing for the better

Marketing at the crossroads: Prop up the old model, or create a new one? Afdhel Aziz and Bobby Jones have a plan 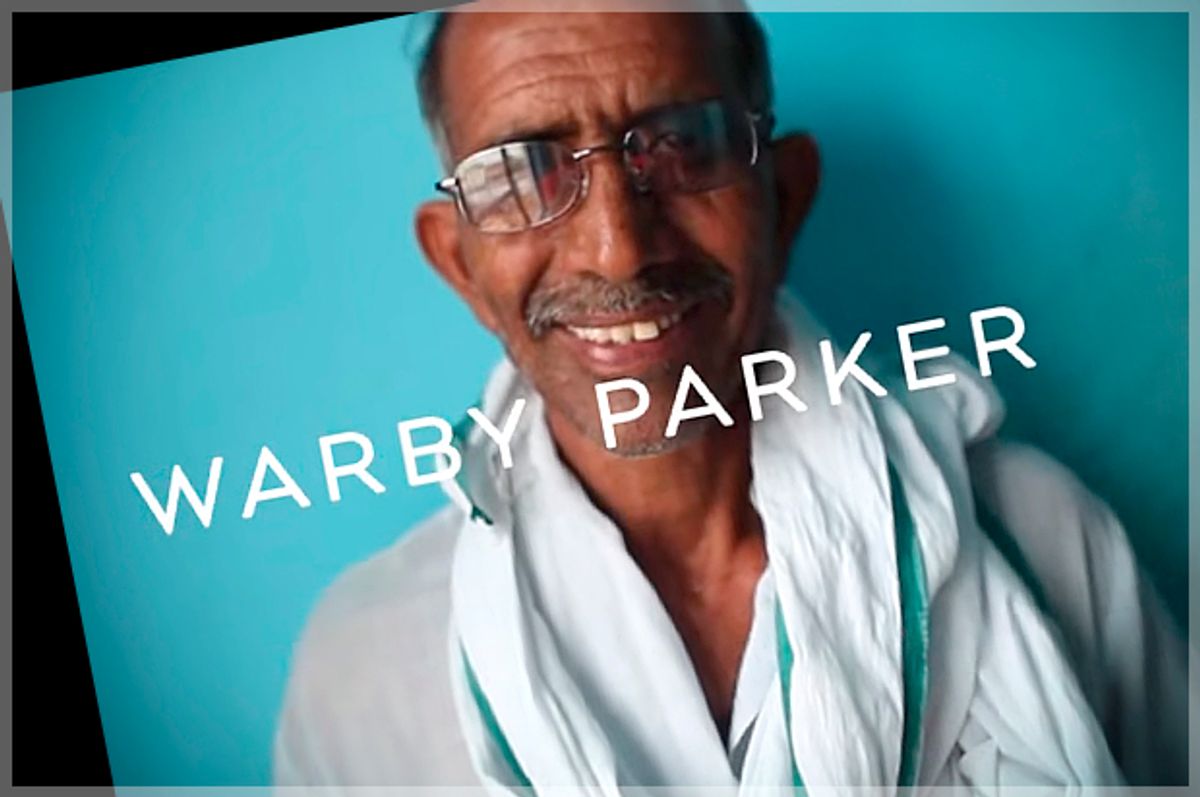 A screenshot of Warby Parker's "Buy a Pair, Give a Pair" video. (YouTube/Warby Parker)
--

Marketing has an image problem, and Afdhel Aziz and Bobby Jones want to fix it. Media-savvy millennials, and their Gen-Z counterparts, have lost faith in advertising. They want brands to be socially responsible, but of course they can’t be dumpy: They still have to look trendy and have flawless, exacting design. This may sound like a tall order -- being cool and doing good. In their new book “Good Is the New Cool: Market Like You Give a Damn,” Aziz and Jones argue that this combination is well within reach for all advertisers today, but first they must change the way they do business, and the way they think.

“We are at a crossroads: either we can try to prop up the old, broken marketing model, or we can create a new model, one that is fit for the unique challenges of today,” the authors contend. Last week at Salon, the two award-winning marketers explained how they train companies to achieve good, and cool.

"Good Is the New Cool" profiles specific companies that have structured their marketing to treat their consumers like citizens, not mere buyers. Such businesses, like Omaze, Warby Parker, the Honest Company and Upworthy, to name a few, are putting social good into the very way they do business -- and it’s making them loads of money.

“This made my day this morning,” said Aziz, holding up his smartphone to show me a photo on Twitter of hip-hop mogul and business scion Russell Simmons smiling and holding a copy of “Good Is the New Cool." Aziz and Jones, whose work has long focused on marketing to millennials, were thrilled to see industry leaders embracing their business philosophy of doing well by doing good as a matter of working practice. Being photographed with the book always helps advance a message, too.

Aziz spent many years in marketing for big brands like Heineken, Nokia and most recently Absolut vodka. Jones is currently CMO of Peace First and a seasoned go-to for companies that want to reach adults with the most buying power. They met years ago, when Young was on the agency side, and Aziz was on the client side, with Heineken. Feeling a sense of mid-career dissatisfaction about whether their work -- though it paid well and gave them industry status -- meant anything in the end, they began to question its purpose.

“More and more, I found myself asking questions: What is all this for? Does this work even matter? Where is the joy in this? And I wasn’t alone,” Jones writes in the introductory chapter of “Good Is the New Cool.” So the two friends and collaborators decided there had to be a better way to work.

Thus began a multi-year journey to re-envision marketing strategies for companies large and small, focused on how to reach increasingly elusive millennial consumers, who have been described as permanent moving targets because their interests are varied and their buying power is growing. Jones cites statistics that show that “millennials want to work for and buy from companies that have a higher purpose than just making profit -- the kind of ethical, stakeholder-driven companies that think about People [and] Planet, not just Profit. They have realized that (to quote L.N. Smith) ‘every dollar they spend is a vote for the type of world they want to live in.’”

If the people in our society with the most spending power want to buy from and work for companies with a social conscience, that changes the very fabric of how products and services are sold. According to Deloitte’s 2015 Millennial Survey, 84 percent of millennials say making a positive difference in the world is more important than professional recognition.

Millennials in the United States number 80 million and have a combined annual spending power of $200 billion (and a staggering $2.45 trillion globally), report Jones and Aziz. According to the 2015 Cone Communications Millennial CSR Study, 91 percent would switch brands to one associated with a cause (versus the overall U.S. average of 85 percent).

"I think overall there is a growing sense of obligation and urgency among those that want to do good in the world to do so now," said Jones. "The biggest barrier is, most people don’t know what to do. The most effective social-good marketing is showing how brands can be forces for good in this moment and creating accessible ways for people to get involved through their platforms."

A recent example of this effort is Kind Bar’s decision to donate $1.1 million to people working to make their communities better. Some of those awarded money are helping to get clean water to Detroit or providing showers for the homeless population of San Francisco.

Aziz and Jones have enumerated seven key principles, which they say can change a company’s overall strategy for the better, setting a business on a better path to achieving greater good in the world -- and increasing sales along the way. “Know Your Purpose (A.K.A. know what you give a damn about)” is the first rule, and as those versed in branding and marketing techniques that work have long known, that’s about promising authenticity in your brand, and then making sure you deliver.

"We believe in the power of young people to change the world for the better -- right now," Jones said, "and we invest in their ability to imagine and implement compassionate solutions to injustices around the world. We are partnering with brands that share that belief.” Asked for examples, Jones offered, “We partnered with the leading social community for high school students in the country, After School, to promote the Peace First Challenge, which will provide young people with the tools, mentorship, and financial support to solve any injustice they are passionate about."

Asked what trends they are seeing in social-good marketing, and what to look out for among successful brands in the future, Aziz and Jones cited more inclusive narratives as key: “Multiculturalism, gender equality and eclecticism are the social norms of younger generations,” offered Aziz. “The successful brands will be the ones that are able to craft narratives that celebrate the diversity that exists in young people’s lives while also reminding us all of our common humanity. In our book, we show how Mimi Valdés of I am Other is doing this in really cool ways.”

Another trend? Less disruption of our lives, and more optimization. “In the future, successful brands will not focus on advertising, they will find ways to solve problems that make people’s lives better, and by doing that they will ignite advocacy, which is the biggest driver for brand growth and value,” Aziz said. “As Jay Coen Gilbert, co-founder of B Lab, the nonprofit behind the revolutionary B Corps business model, says, 'Unleashing the power of business to address our most challenging problems has never been more needed.'”

Culture creators and nonprofits will become closer allies, Aziz and Jones suggest. “Brands will create new alliances with cultural influencers (artists, musicians, filmmakers, etc.) and nonprofits to do even more good in society than ever before,” the duo explained. “Partnering with nonprofits dedicated to solving problems like social and economic justice, environmental issues and civil rights is a superb way to unleash the resources of a brand, and align it with a credible voice in the space. In our book, we showed how Do Something’s Campaign with Alexander Wang drove youth engagement in social activism.”

This holiday season, the authors say it’s great to see companies like Patagonia, which have been long-term leaders in finding socially responsible ways to operate, do even more good than before. Patagonia's recent Black Friday pledge to donate $10 million in sales to grassroots nonprofits working to preserve the environment, Aziz and Jones observe, is a great example of another central principle of marketing: "Back Up the Promise with the Proof.”