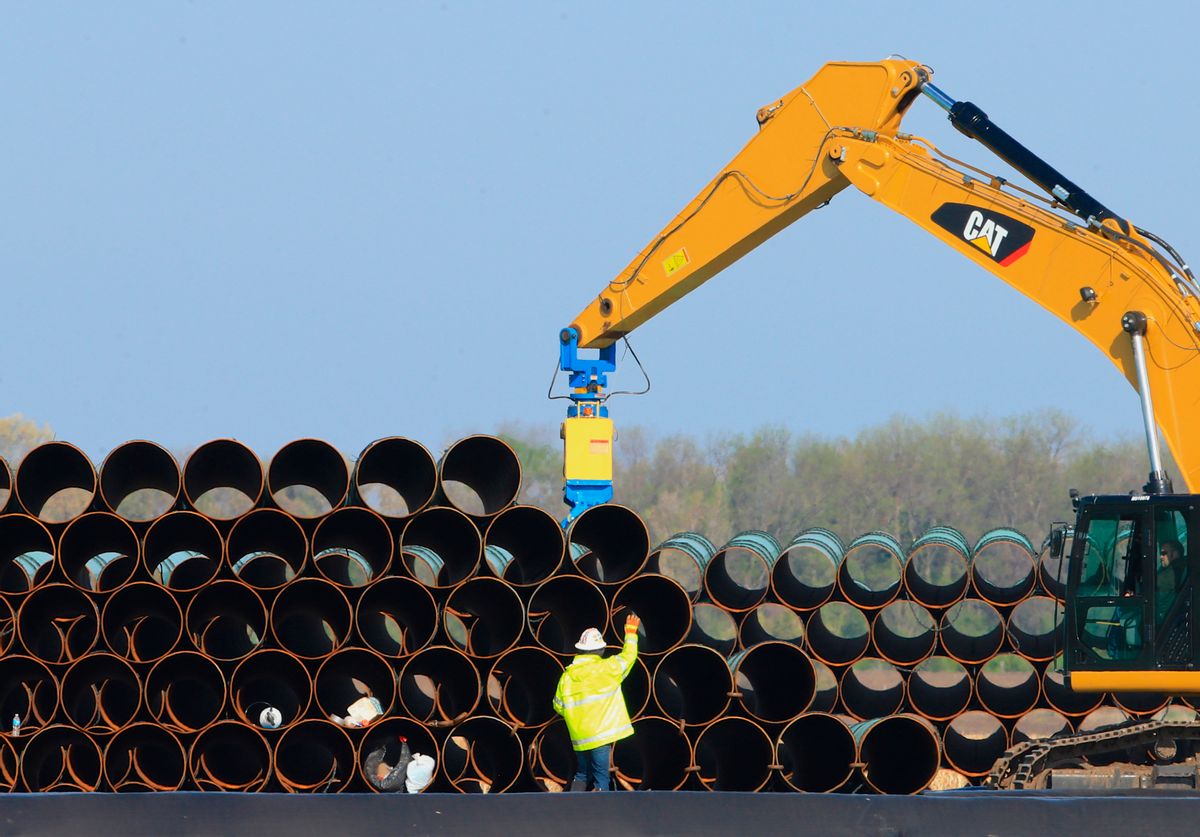 FILE - In this May 9, 2015 file photo, pipes for the proposed Dakota Access oil pipeline that will stretch from the Bakken oil fields in North Dakota to Illinois are stacked at a staging area in Worthing, S.D. Construction on the pipeline is now underway in North Dakota, South Dakota and Illinois, three of the four states that will carry the oil from western North Dakota. The pipeline also will cross Iowa, but regulators there have declined to act quickly on a request to allow Texas-based Energy Transfer Partners to begin construction in that state. (AP Photo/Nati Harnik, File) (AP)
--

It's not yet clear why the monitoring equipment didn't detect the leak, Wendy Owen, a spokeswoman for Casper, Wyoming-based True Cos., which operates the Belle Fourche Pipeline, said.

A landowner discovered the spill near Belfield on Dec. 5, according to Bill Suess, an environmental scientist with the North Dakota Health Department.

Suess said the spill migrated about almost 6 miles from the spill site along Ash Coulee Creek, and it fouled an unknown amount of private and U.S. Forest Service land along the waterway. The creek feeds into the Little Missouri River, but Seuss said it appears no oil got that far and that no drinking water sources were threatened. The creek was free-flowing when the spill occurred but has since frozen over.

Suess said about 37,000 gallons of oil had been recovered as of Monday.

Owen said the pipeline was shut down immediately after the leak was discovered. The pipeline is buried on a hill near Ash Coulee creek, and the "hillside sloughed," which may have ruptured the line, she said.

"That is our No.1 theory but nothing is definitive" Owen said. "We have several working theories and the investigation is ongoing."

True Cos. has a history of oil field-related spills in North Dakota and Montana, including a January 2015 pipeline break into the Yellowstone River. The 32,000-gallon spill temporarily shut down water supplies in the downstream community of Glendive, Montana, after oil was detected in the city's water treatment system.

The 6-inch steel Belle Fourche Pipeline is mostly underground but was built above ground where it crosses Ash Coulee Creek, Suess said.

Owen said the pipeline is used to gather oil from nearby oil wells to a collection point.

About 60 workers were on site Monday, and crews have been averaging about 100 yards daily in their cleanup efforts, he said. Some of the oil remains trapped beneath the frozen creek.

"It's going to take some time," Suess said of the cleanup. "Obviously there will be some component of the cleanup that will go toward spring."

True Cos. operates at least three pipeline companies with a combined 1,648 miles of line in Montana, North Dakota and Wyoming, according to information the companies submitted to federal regulators. Since 2006, the companies have reported 36 spills totaling 320,000 gallons of petroleum products, most of which was never recovered.

The potential for a pipeline leak that might taint drinking water is at the core of the disputed four-state, $3.8 billion Dakota Access Pipeline, where thousands of people have been protesting its construction in southern North Dakota. That pipeline would cross the Missouri River. Dallas-based pipeline company Energy Transfer Partners says the Dakota Access pipeline would include safeguards such as leak detection equipment and that workers monitoring the pipeline remotely in Texas could close valves within three minutes if a breach is detected.