GOP's big overreach is coming: Another terrible new plan to “save” Social Security by destroying it

Nobody campaigned on slashing Social Security benefits, but Republicans in Congress just can't help themselves 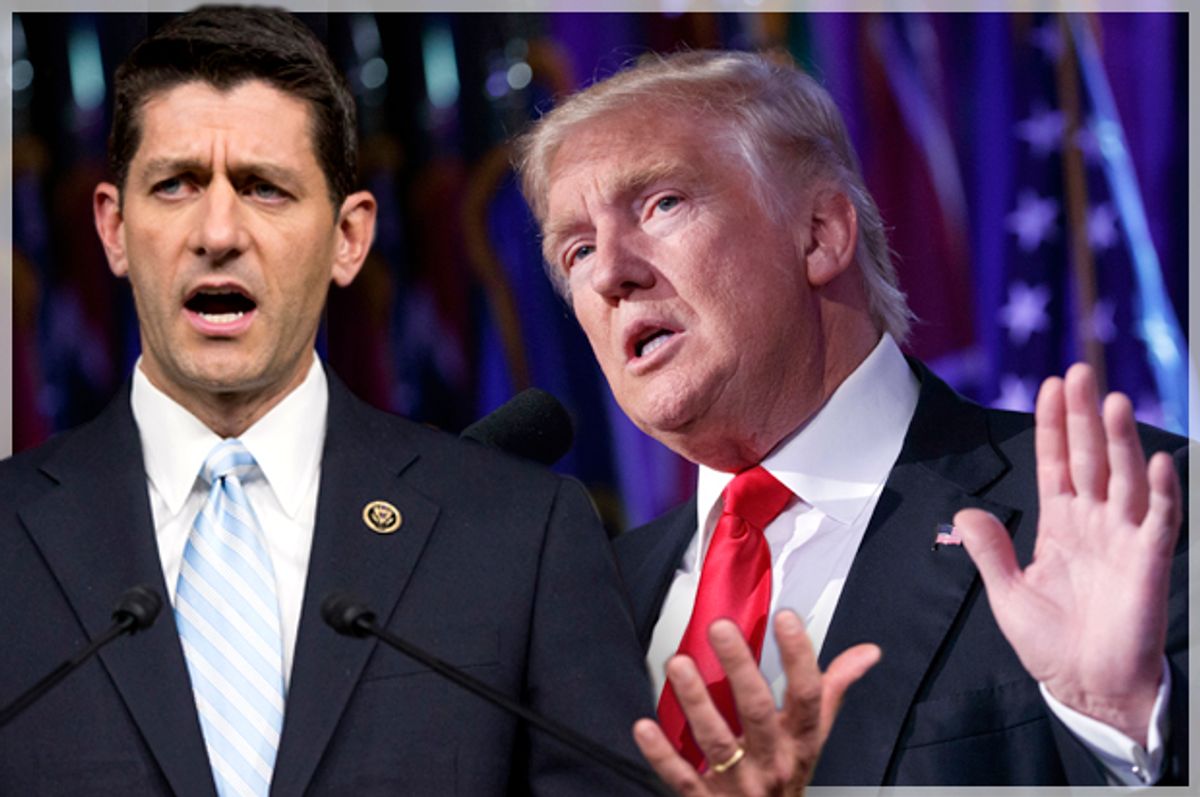 One of the many quirks of the 2016 presidential campaign was that both major-party candidates ran on explicit promises to not ruin Social Security.

Hillary Clinton, after feeling some intense pressure from Bernie Sanders, came out in support of expanded Social Security benefits paid for by bumping up taxes on the rich. Donald Trump didn’t really have a Social Security “policy” to speak of but made a firm promise to “do everything within my power not to touch Social Security, to leave it the way it is.” That meant no benefit cuts or changes to the retirement age. “It's my absolute intention to leave Social Security the way it is,” Trump said.

But if Social Security cuts were a dead letter during the recently concluded election, after Trump’s still-not-quite-believable victory things look somewhat different. Republicans are about to assume control of every branch of government and  seem unwilling to waste the opportunity to take another shot at hollowing out one of the most successful government programs ever created.

Last week Rep. Sam Johnson, R-Texas, chairman of the subcommittee on Social Security of the House Ways and Means Committee, unveiled a new bill that would, as he described it, “permanently save” the social insurance program. The key to “saving” Social Security, it turns out, is to slash benefits for pretty much everyone, thus undermining the purpose of the program.

Read the Social Security actuaries’ assessment of plan: They determined that Johnson’s bill would give Social Security “the ability to pay 100 percent of scheduled benefits on a timely basis for the foreseeable future.” That sounds good until you dig through the tables to find out how this becomes possible. Put simply: Johnson’s plan gouges out benefits for the middle class.

Mother Jones’ Kevin Drum compiled all the data and it's an ugly picture. Generally speaking, if someone spends his or her life below the poverty level, Johnson’s plan would award a 22 percent bump in benefits, which isn’t too bad, all things considered. (It’s important to point out that a person can have a low income and still be royally screwed by this plan if he or she doesn’t have a sufficiently long a work history.)

But for everyone else, it’s a disaster. People who make more than $22,000 annually over the course of their lifetimes would see their benefits slashed. According to a Social Security actuaries’ report, a worker who spends 44 years working at a salary of about $50,000 would absorb a benefit cut of nearly 17 percent.

The reason why all these cuts would be necessary is that the plan follows standard Republican tax dogma, which will not countenance a single red cent of additional revenue through higher taxation. The rationale of the Johnson plan is that future low-earning retirees would have to absorb damaging cuts so that the wealthy can escape the tyranny of having more payroll taxes deducted from their sizable wages.

All this is to say that a plan like this, in this national climate, should be politically radioactive. The sanctity of middle class interests in policy fights like these usually triumphs. That’s why Democrats are so keen on boosting Social Security funding through a payroll tax “doughnut hole.” Right now, only the first $118,500 of a worker’s income is subject to payroll taxes. Democrats from Barack Obama to Bernie Sanders have proposed applying the payroll tax to incomes above $250,000 as well, thus carving out a nice big, politically palatable “hole” so that “middle-class” earners are able avoid the additional tax burden.

Johnson’s plan doesn’t even pretend to be friendly to middle-class earners. It treats the long-term financial health of Social Security as the ultimate good. Since he’s unwilling to increase the program’s revenue, the only way to achieve that goal is to reduce the program’s effectiveness through deep, broad benefit cuts. The thinking behind his plan is: You may not be able to afford to retire, but at least you’ll have the peace of mind of knowing that Social Security’s ledger is in the black.

Social Security advocacy groups are, of course, incensed. “Donald Trump campaigned on a promise to not touch Social Security,” said Social Security Works founder Nancy Altman in a statement. “But the powerful Chairman of the Social Security Subcommittee of the House Ways and Means Committee has just unveiled a proposal that would slash Social Security benefits and radically transform the program.” And these groups are right to be concerned. Trump may have promised to protect the program, but he’s also an inveterate liar who has acknowledged that he says things just because they play well politically. To that point, he has people on his transition team who strongly favor privatizing Social Security.

The good news is that there’s still little to no appetite among the electorate for doing any sort of damage to the well-liked program. As of last summer, a majority of those surveyed by Gallup favored raising taxes to shore up the program, compared to just 37 percent polled who favored benefit cuts. The Republicans took a political lashing in 2005 when president George W. Bush tried to privatize Social Security. Johnson’s plan to “save” Social Security by wrecking it is a sign that Republicans in Congress might be gearing up for more overreach.