New studies show just how vulnerable LGBT teens are, and they need someone in the White House on their side 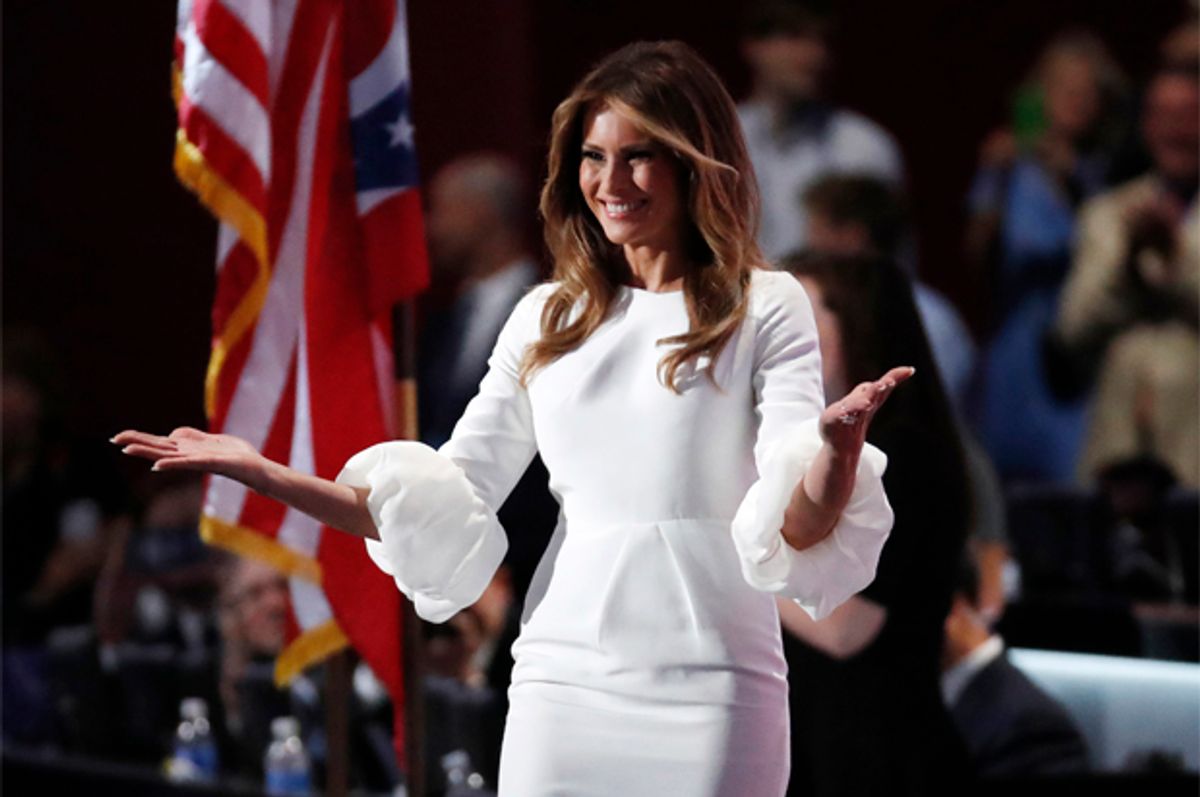 Melania Trump has vowed to fight bullying, and it’s crucial that she delivers on that promise.

The soon-t0-be first lady claimed in a November speech that she would use her public platform to combating harassment — particularly on social media. “Technology has changed our universe,” Melania Trump said before the election. “But like anything that is powerful, it can have a bad side," she said.

"As adults, many of us are able to handle mean words — even lies," she added. " Children and teenagers can be fragile. They hurt when they are made fun of or made to feel less in looks or intelligence. This makes their life hard and forces them to hide and retreat. Our culture has gotten too mean and too rough especially to children and to teenagers.”

Many pointed out the hypocrisy of a speech against bullying being made by someone whose husband had built his campaign on name-calling, trolling and doxing — without ever even mentioning Donald Trump’s name. But if Melania  Trump wants to show she’s serious about her pledge, one population needs the White House’s help more than ever: LGBT youth.

A study released this month by Human Rights Watch, titled “Like Walking Through a Hailstorm,” showed that despite numerous victories for LGBT rights in the past few years, progress is uneven. The international advocacy organization spoke with more than 350 students and 140 teachers, staff, parents and youth advocates, specifically focused on five states: Alabama, Pennsylvania, South Dakota, Texas and Utah. Researchers found that experiences of harassment, bullying and violence were nearly universal among LGBT students in schools in classes from kindergarten through grade 12.

“Schools can be difficult environments for students, regardless of their sexual orientation or gender identity, but they are often especially unwelcoming for lesbian, gay, bisexual, and transgender (LGBT) youth,” the 106-page report stated.

According to the study, “Almost all of the students interviewed for the report reported encountering verbal harassment in their school environment, even in the most LGBT-friendly schools.”

The organization found that LGBT youth were more than twice as likely as their heterosexual and cisgender counterparts to be physically assaulted at school, verbally attacked by another student or to face social ostracism.

Such widespread bullying has an extremely detrimental impact on minors who may still be coming to terms with their sexuality or gender identity and may also face a lack of acceptance at home. As Human Rights Watch noted, 42.8 percent of LGBT youth reported suicidal ideation in the past year, and more than one quarter (29.4 percent) attempted to take their own lives. The rate of suicide attempts among LGBT youth is 4.59 times higher than that for heterosexual and cisgender students.

“I remember in middle school, asking about same-sex relationships, and being totally shut down and being pulled aside by an administrator and told that’s not something we talk about,” Angela T., a 17-year-old high school student in Pennsylvania, told Human Rights Watch.

Kevin, a transgender student who lives in Utah, told Human Rights Watch that he’s frequently shoved into school lockers — like a bullied kid in some '80s movie. He describes the kind of violence that many people don't believe happens anymore, as society allegedly grows more “tolerant” of the trans community. “Sometimes people will just push up on me to check if I have boobs,” said Kevin, adding, “I’ve reported slurs and they say they’re going to go talk to them, but they never do.” He claimed that faculty members have blamed him for being targeted, saying that these incidents wouldn’t occur if he weren’t “so open” about his gender identity.

Human Rights Watch's findings match those of previous surveys about the pressures and trauma that youth experience in schools.

Earlier this year the Gay, Lesbian and Straight Education Network published a report that showed that LGBT youth were more likely to miss class or even drop out of school than their peers, largely due to the fear of being harassed by other students.

GLSEN also found that overall, teachers and staffers were ill-equipped to deal with these incidents: While 83 percent of those surveyed said they believed it was their job to counsel LGBT students who had been victimized by their classmates, just a third had received training of any kind on the subject.

The support and informed counsel of administrators can make a huge difference in fostering a welcoming environment for LGBT youth. This same survey showed that while just 20 percent of LGBT students surveyed had learned about gay-themed subjects or history in their classes, those who did reported significantly better life outcomes than individuals who had been denied the same education.

California became the first state to teach LGBT history in schools when the California State Board of Education approved inclusive curricula for classrooms this year, but it remains the only one.

Eight states in the U.S. won’t even allow teachers to say the word “gay” in schools, let alone teach about the impact of figures like Harvey Milk, Marsha P. Johnson and Sylvia Rivera. These “no promo homo” states, Alabama, Arizona, Louisiana, Mississippi, Oklahoma, South Carolina, Texas and Utah. (Indeed Alabama compels sex ed teachers to emphasize that “homosexuality is not a lifestyle acceptable to the general public.”) Students in these states are receiving very little aid from school staffers who by state law aren’t allowed to talk about what’s going on in their lives.

Because it’s difficult to find a faculty sponsor when staffers can’t discuss homosexuality with students, few schools in “no promo homo” states have Gay-Straight Alliances, meaning that queer youth may have little opportunity to discuss the bullying they face.

During the presidential election Hillary Clinton promised that if she were elected president, she would spearhead a $500 million campaign to fight bullying against minority students in schools — a plan would include LGBT youth, as well as Muslim students and children with disabilities. Calling bullying a “national crisis,” Clinton said that her program would also combat cyberbullying and fund expanded resources for the mental health needs of marginalized youth populations.

Clinton, of course, was not elected president, and when it comes to serving as an advocate for LGBT youth, Melania Trump is no one’s likely pick.

Her husband’s team is filled with politicians and public figures who oppose the basic rights and dignity of LGBT people. Mike Pence, who will serve as the vice president under Trump, has advocated that funding from the Ryan White Care Act that provides lifesaving resources to people living with HIV, be diverted to conversion therapy: Such programs, which seek to “change” the sexual orientation of LGBT youth, are opposed by nearly every leading psychological association in the country. Conversion therapy is also banned in five states, as well as the city of Cincinnati.

If the incoming first lady really wants to fight bullying, she will likely face off against key members of the Trump administration, as well as extreme factions within the Republican Party emboldened by her husband's campaign and victory. Trump's tenure in Washington has already encouraged anti-gay lawmakers to draft legislation that will roll back the gains that LGBT people have made in recent years by targeting the most vulnerable among us. For example a proposed Texas law would force teachers to out LGBT students.

Our youth need someone in the White House who is willing to take on Trump to advocate for their safety and health. Melania isn’t the LGBT champion we asked for. But like it or not, she might be our best shot.