North Carolina’s season of hate is over: It’s time to repeal the state’s anti-LGBT law 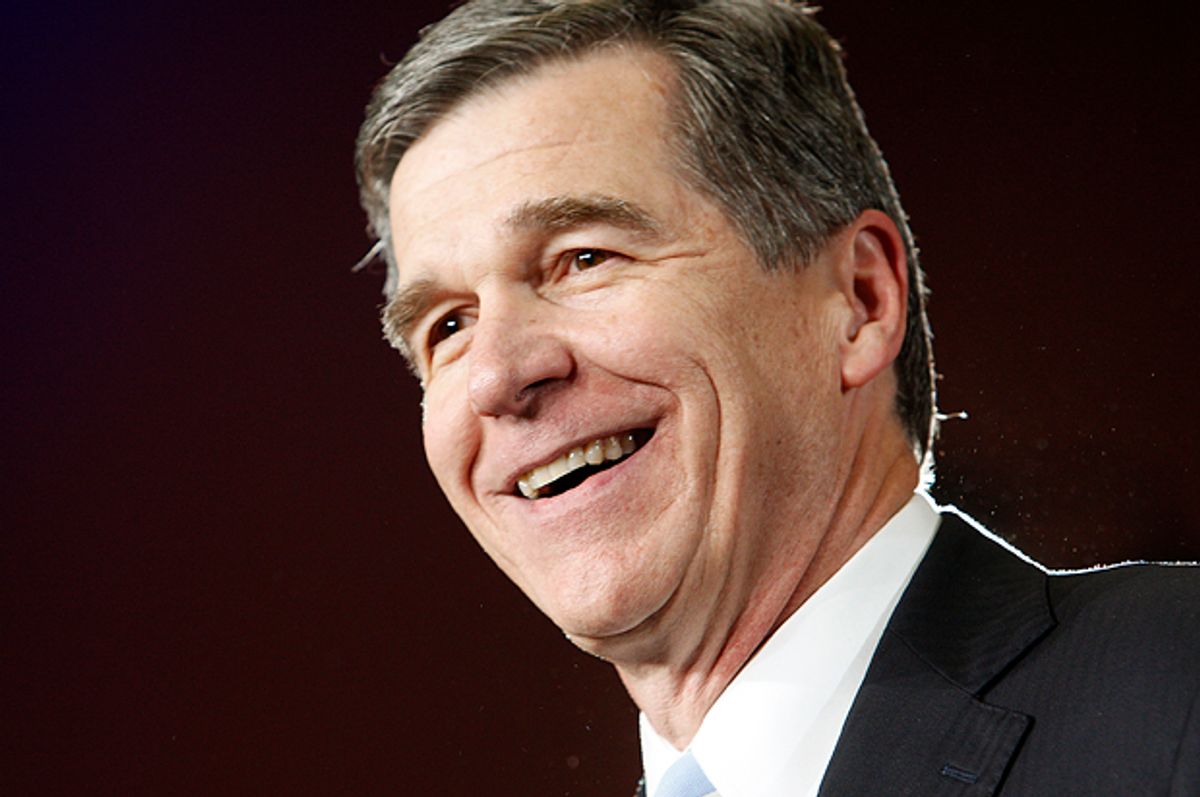 North Carolina’s new governor-elect is ready to put a stop to LGBT discrimination in his state.

Democrat Roy Cooper, who was finally declared the winner of the 2016 gubernatorial race after incumbent Pat McCrory, a Republican, contested the extremely close results, declared that at the top of his agenda will be a repeal of House Bill 2. The legislation, signed into law by McCrory in March, forces transgender North Carolinians to use the public restroom that matches the sex listed on their birth certificate. The Democrat, who formerly served as the state’s attorney general, campaigned against the bill and on Wednesday he claimed his victory was a mandate to follow through on that promise.

“With this election, North Carolina is on its way to repairing its reputation,” Gov.-elect Cooper told supporters. “Let's finish the job and repeal HB 2.”

A recent survey by the National Center for Transgender Equality testifies to the importance of killing anti-LGBT legislation in the state: This  type of law puts the lives of trans people in danger. The advocacy group polled 27,715 transgender individuals from across the U.S. and found that 59 percent had avoided a public restroom in fear that they would be harassed or threatened. Twelve percent reported that they were verbally attacked when attempting to use the bathroom, while 9 percent said they had been physically assaulted and 10 percent claimed that they had been sexually assaulted in a public facility.

Those latter numbers might seem small, but they aren’t. A recent survey published by The New York Times estimated some 1.4 million transgender people reside in the U.S. If just 1 out of 100 claim that they were sexually assaulted in a restroom over the past year, that’s 14,ooo people. For reference, about the same number of people live in downtown St. Louis.

These numbers align with previous surveys about the discrimination that trans people face when trying to do something as primal as going to the bathroom. A 2013 report by  The Williams Institute, a pro-LGBT think tank at the University of California, Los Angeles, found that 70 percent of trans respondents had been harassed in a public bathroom at some point during their lifetime. Nearly 9 percent also said that they had experienced physical violence as a result of their restroom preferences.

Anti-bathroom laws like HB 2 have made that problem only worse. This legislation is based on the idea that trans people are pernicious “bathroom predators” who pose a danger to women and children in public facilities. McCrory, who continued to stand by the law in the face of widespread boycotts, ran a campaign ad in September claiming that his opponents wanted to “allow boys to use the girls locker rooms and showers.”

He asked, “Does the desire to be politically correct outweigh our children’s privacy and safety?” adding, “Let’s do what’s right.”

The fear of trans people stirred up by anti-trans bathroom legislation was magnified by fake news articles that falsely claimed that trans people had targeted dozens of people in public restrooms, despite the fact that there are no verified reports of such incidents taking place. More than 200 cities and local governments in the U.S. have passed laws granting equal access in public accommodations to trans people — which includes employment, housing, museums and parks — without a surge in sexual violence as a result.

Nonetheless, a website The Boston Tribune claimed in May that a 39-year-old transgender woman named Donna Wright was gunned down in public bathroom. The story alleged that Wright had stalked a female customer, 55-year-old Kathleen Workman, in Bradford’s, a department store located in Colorado. The top comment on the article, which has been viewed more than 100,000 times since its publication, reads: “Hate to say it, but I’m not surprised that this happened. To be honest, it’s probably for the best as hopefully these MEN will think twice prior to following our wives and daughters into the restroom.”

But as BuzzFeed has reported, Bradford’s doesn’t exist. Neither does Donna Wright or Kathleen Workman. That didn’t stop the story from being picked up by right-wing news outlets like DC Gazette and Tea Party News.

Those reports, while false, have helped encourage real violence against trans people following the passage of HB 2. A transgender woman in Washington was attacked while shopping at a Giant grocery store by a security guard, who will face charges of simple assault. The female guard on duty forced the customer out of the store, claiming that she was not allowed to use the women’s facilities because “they did not pass the law yet.” That’s untrue. The District of Columbia has nondiscrimination laws on the books that grant equal access on the basis of gender identity and sexual orientation.

That violence isn’t specific to trans people, however. There are also reports of cisgender women being harassed in public restrooms after others mistook them for being transgender — such as 22-year-old Aimee Toms, who began sporting a short bob in May after donating her hair to a cancer charity. A woman in a Connecticut restroom allegedly called her “disgusting.”

The National Center for Transgender Equality has showed that an elevated threat of verbal or physical assault has had a grave impact on the trans community. Its survey found that nearly 48 percent of trans people polled had considered taking their own life in the past year, a rate that’s 13 times higher than suicidal ideation level among the general population. If trans people are so worried about where they can safely do their business that 8 percent claimed they acquired a urinary tract infection from “holding it” one too many times, this only exacerbates mental distress.

The North Carolina legislature will continue to block Gov. Cooper’s effort to repeal HB 2. As I previously wrote for Salon, there may be a new occupant of the governor’s chair but the legislature is still controlled by a supermajority of Republicans, many of whom were the very same lawmakers who passed HB 2 in March.

Some Republican legislators, however, have signaled their willingness to work with Cooper to see the bill struck down. Rep. Gary Pendleton, who represents Raleigh, called for a special session of the General Assembly in September, explaining that he would be OK with repealing the law if the governor passed key provisions that would keep cisgender men from entering women’s restrooms. Two other conservatives, Sen. Rick Gunn, R-Burlington, and Sen. Tamara Barringer, R-Cary, also called for a compromise on HB 2.

Other Republicans may follow. HB 2 has proved to not only be costly for North Carolina and politically unpopular; the bill has also risked the safety of a population that needs our support not condemnation. Scapegoating and division might have won Donald Trump the presidency, but transphobia has proved to be  a losing strategy in the Tar Heel State.

McCrory lost. Let HB 2 die along with his memory.