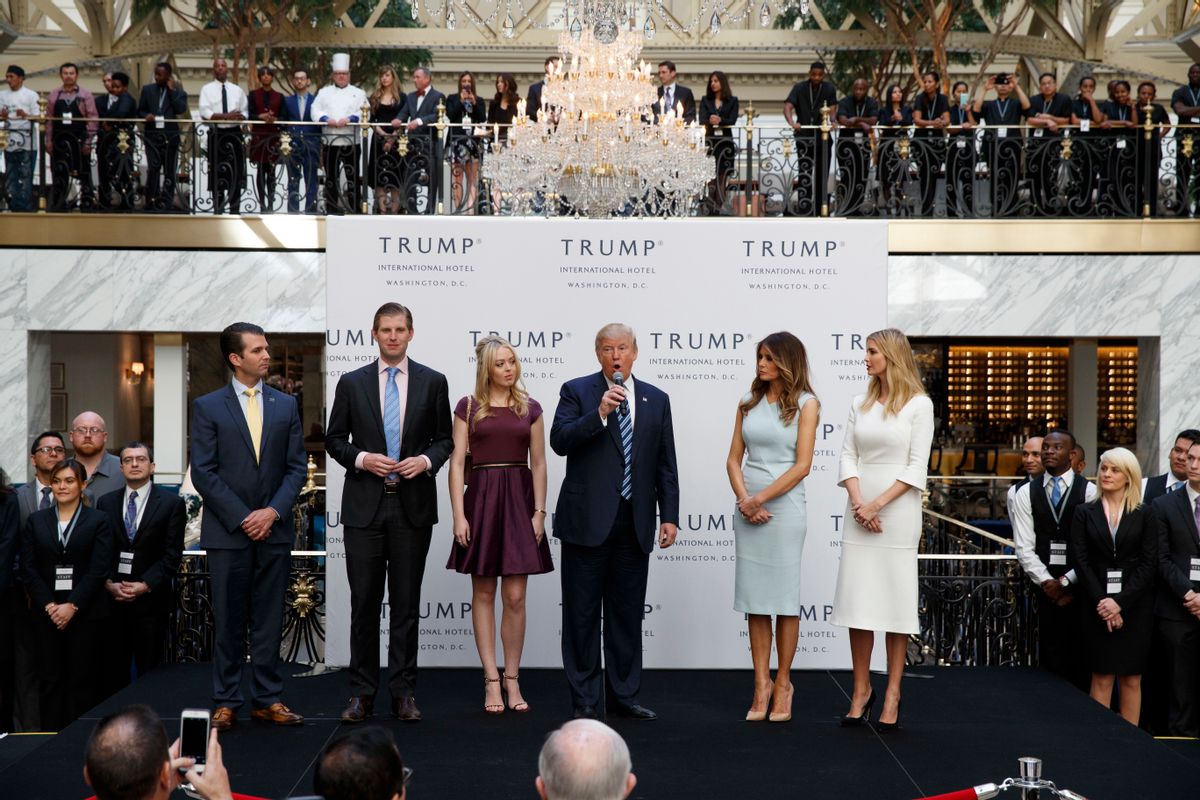 NEW YORK — Donald Trump says he will step away from managing his business empire while he's in office — but he's not going to sell it off. If he follows through, he will shatter a presidential precedent on conflicts, and ethics experts say he will open the door to investigations and lawsuits that could hobble his administration.

"My executives will run it with my children," he said in a Fox News interview that aired Sunday. He added that he will not have "anything to do with management" and won't "do deals" for his business while he's president.

That's "a step in the right direction, but he can't have people doing deals on his behalf," said Richard Painter, the chief White House ethics lawyer under President George W. Bush. "He can't have ownership."

Indeed, for decades, presidents have sold their stocks and other personal holdings and put the cash into a blind trust overseen by an investment manager. For example, to stay on the right side of ethics, President Jimmy Carter sold his Georgia peanut farm.

That was one business. In one state.

The Trump Organization presents a far more complex situation. He has ownership stakes in residential towers, hotels, resorts and golf clubs in the U.S., and has struck licensing and property management deals for similar properties around the world. In a financial disclosure he was required to file during the campaign, he listed stakes in about 500 companies in at least 25 countries.

Only by selling to an uninterested third party can Trump assuage critics who suggest that otherwise he could shape regulatory, tax or foreign policies to enrich himself. A sale would also prevent people from trying to influence policies by helping — or threatening to hurt — his business.

Trump is expected to offer more details on Thursday. Few are expecting a clean break from all his ventures.

Newt Gingrich, a vice chairman of Trump's transition team, said voters knew Trump was a billionaire businessman when they elected him and he shouldn't have to sell. Instead, Gingrich said he recommended to transition officials that Trump appoint a panel of five ethics "jurists" to vet potential conflicts.

The government agency charged with monitoring ethics is pushing for far more. The Office of Government Ethics tweeted recently about Trump, "We can't repeat enough how good this total divesture will be." The office clarified later that it did not know if that was indeed his plan.

Trump will generally be exempt from federal rules on conflicts of interest, but there is one document that ethics experts say could trip him up: the U.S. Constitution. In what is often referred to as the "emoluments clause," the Constitution bans public officials from accepting gifts or payments from foreign governments and companies controlled by them without the consent of Congress.

Would a foreign official buying a condo in a Trump building put the president in violation? What if a foreign government official greenlighted one of Trump's projects in his country?

There is disagreement on the issue because the language in the clause is vague and hasn't been subject to court rulings.

Painter, Bush's ethics lawyer, thinks the clause is likely to be a big problem for Trump given his far-flung real estate holdings.

"He's going to have to get all the foreign governments out," Painter said, or he risks "getting impeached."

Selling would also help lessen another threat to the presidency: private lawsuits.

Scott Amey, general counsel of the Washington watchdog group Project on Government Oversight, said Trump could be named in all sorts of routine business lawsuits that will eat up his time if he doesn't disentangle himself from his holdings. "It's not in the country's best interest to have the president under constant fire," he said.

Republicans control both the House and Senate and have shown little interest in raising sticky issues as the new president takes office. But the Democrats have already called for investigations.

Separately, American Bridge, an outside group that backed Hillary Clinton in the campaign, has amassed 20,000 hours of Trump footage and audio and compiled reams of opposition research that it will turn to throughout his administration.

Founder David Brock promises to file lawsuits in the style of Judicial Watch, a conservative nonprofit that successfully sued to obtain Clinton's emails from her tenure as President Barack Obama's secretary of state.

Even if Trump does nothing to enrich himself while in office, government ethicists and others say the appearance of conflicts could be damaging.

David Drabkin, an expert in government contracting law, said the reason recent presidents have sold their holdings despite no requirement to do so is to set a standard for other officials.

"If you're secretary of defense, one of things you have to do is divest yourself of your stock holdings in defense companies. The president isn't subject to that rule, but he has to lead all these people," Drabkin said.

Drabkin noted the president will appoint the head of the government agency that negotiates Trump's annual lease payments for the use of the taxpayer-owned Washington building that houses his new hotel.

Others have pointed out that Trump will name members of the National Labor Relations Board, which rules on labor disputes, such as one at a Trump hotel in Las Vegas that went against the president-elect recently.

Foreign officials using his business interests to seek a better relationship with the U.S. could add to the air of impropriety.

Soon after the election, Trump's partner in a residential tower in the Philippines was named a "special envoy" to the U.S.