Another Fox News loon joins the government — but K.T. McFarland could be the least qualified of all

K.T. McFarland, who once said Hillary Clinton was spying on her by helicopter, will be a top national security aide 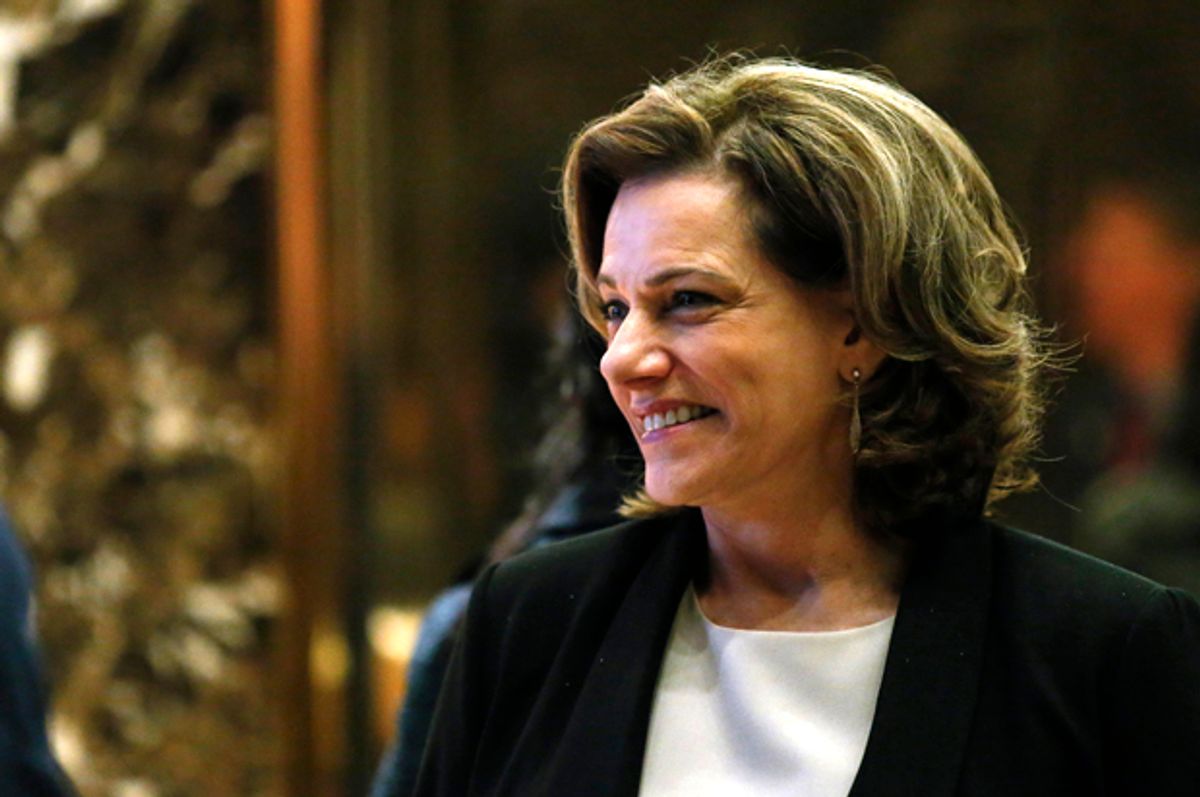 One of Donald Trump's top contenders for a Cabinet post, former United Nations ambassador John Bolton, went on TV over the weekend and suggested that he thought it was possible that the alleged Russian hacking of Democratic emails before the election was actually a "false flag" — a ruse — perpetrated by the Obama administration.

When pressed, Bolton he told a Fox News anchor, “We just don’t know. But I believe that intelligence has been politicized in the Obama administration to a very significant degree.” On Monday Bolton walked this back, saying he didn't mean to suggest that it was necessarily the Obama administration but merely some entity other than the Russians. OK.

This wasn't Bolton's first foray into conspiracy theories. He has a long history of having them. Indeed, many of Donald Trump's advisers do. Trump's chief political strategist, Steve Bannon, ran one of the top conspiracy sites on the internet, Breitbart News, so there's no doubt about his embrace of fake news and dark fantasy.

Dr. Ben Carson, Trump's choice for housing secretary, is a self-described reader of "conspiracy books," who is drawn to fables suggesting that the biblical figure Joseph built the Egyptian pyramids to store grain and that the LGBT movement is a communist plot. Trump transition team member Kris Kobach, an anti-immigration zealot who is also the Kansas secretary of state, has mused that Latinos might conduct ethnic cleansing if allowed to become a majority.

These are all domestic advisers, and while that's not a good thing by any means, it's slightly less unnerving than the fact that Trump's foreign policy staff are full blown tinfoil hatters, too. We have learned a fair bit about the lurid imagination of incoming national security adviser Michael Flynn, who has eagerly passed on rumors that Hillary Clinton was involved with occult practices and pedophilia and has retweeted white supremacist, anti-Semitic and Islamophobic propaganda. His son, Michael Flynn Jr., had to leave the transition team after it became clear that he was spreading fake news stories about the fictitious #Pizzagate scandal and was involved with some very unsavory white nationalist groups online. His father's unstable personality has been the subject of many profiles over the past few months, which make clear that he has extremist views across the board. He doesn't seem to be in any danger of losing his job.

Even that might not be so frightening if Trump were surrounded by a team of level-headed professionals who could keep an eye on the details and make sure he didn't go off half-cocked. But if Trump's incoming deputy national security adviser K.T. McFarland is an example of the people he's going to rely on, we've got a big problem. She's a conspiracy theorist, too.

McFarland last worked in government during the Reagan era on a communications team. After a lengthy hiatus to raise her kids, she has spent the past decade as a television personality on Fox News. She reportedly landed the job after befriending Eric Trump and Donald Trump Jr. in the halls of the network and received a recommendation from Henry Kissinger, who remembered her from the Nixon administration. Trump saw her on TV which is always a top recommendation in his book. It turns out that McFarland shares a similar worldview with Flynn and Trump, believing that the US should seek a close relationship with Russia and put everything it has into the battle against Islamist terrorism. She likes torture, likes it a lot and considers failing to profile Muslims to be "political correctness."

The problem is that the deputy national security adviser job is apparently extremely arduous and requires a heroic level of energy and experience to coordinate foreign policy, intelligence and national security and develop policy recommendations across all levels of the executive branch. According to Politico, there are few people in the field who believe McFarland has the right kind of temperament or experience for the job.

As I mentioned, she's a conspiracy nut as well. She ran a quixotic Republican primary campaign for Hillary Clinton's Senate seat in 2006 and claimed that the incumbent was so frightened of her challenge that for reasons that are not obvious she had helicopters flying over McFarland's house and kept her under surveillance.

Politico related this story from 2009:

“They’re going to want something for their money. They’re not our sugar daddy,” McFarland told a tea party crowd in Times Square, referring to America’s more than $1 trillion in debt to Beijing. “So, 10 years from now, you might not have American Independence Day. . . . The Fourth of July might just end up being another day on the calendar.”

Unless voters “throw the bums out,” McFarland said, “we can all start learning Chinese.” She then read aloud Mandarin phrases from an index card, including ones for “How can I help you?” and “What do you want from me?”

McFarland pushed the Benghazi meme very hard, claiming that the administration made a political decision not to rescue the embassy personnel and accusing Clinton of having blood on her hands.

And a bizarre recording of a 2011 conversation between McFarland and former general David Petraeus in Afghanistan, obtained by The Washington Post, suggests collusion between Fox News and the general in a number of different respects, including a purported message from former Fox News CEO Roger Ailes saying that he and Rupert Murdoch wanted Petraeus to run for president. This was evidently so embarrassing to Ailes that he threw McFarland under the bus saying it was supposed to be a joke that she misunderstood.

In other words, K.T. McFarland is yet another Fox News extremist who's spent way too much time in the right-wing fever swamps. That's probably fine for someone who has a show on Fox News and gives speeches to the Tea Party. She's got something to say and it's a nice lucrative gig. But the job of deputy national security adviser is supposed to be held by someone who is highly skilled at managing a vast bureaucracy and analyzing and synthesizing information without prejudice or bias. This person, to say the least, is not that.

So far, in fact, there doesn't seem to be one Trump hire who has those skills. It looks like we're about to find out whether the government can be run solely by people who only watch cable news and read Breitbart, the Drudge Report and Alex Jones' InfoWars. It's quite an experiment.