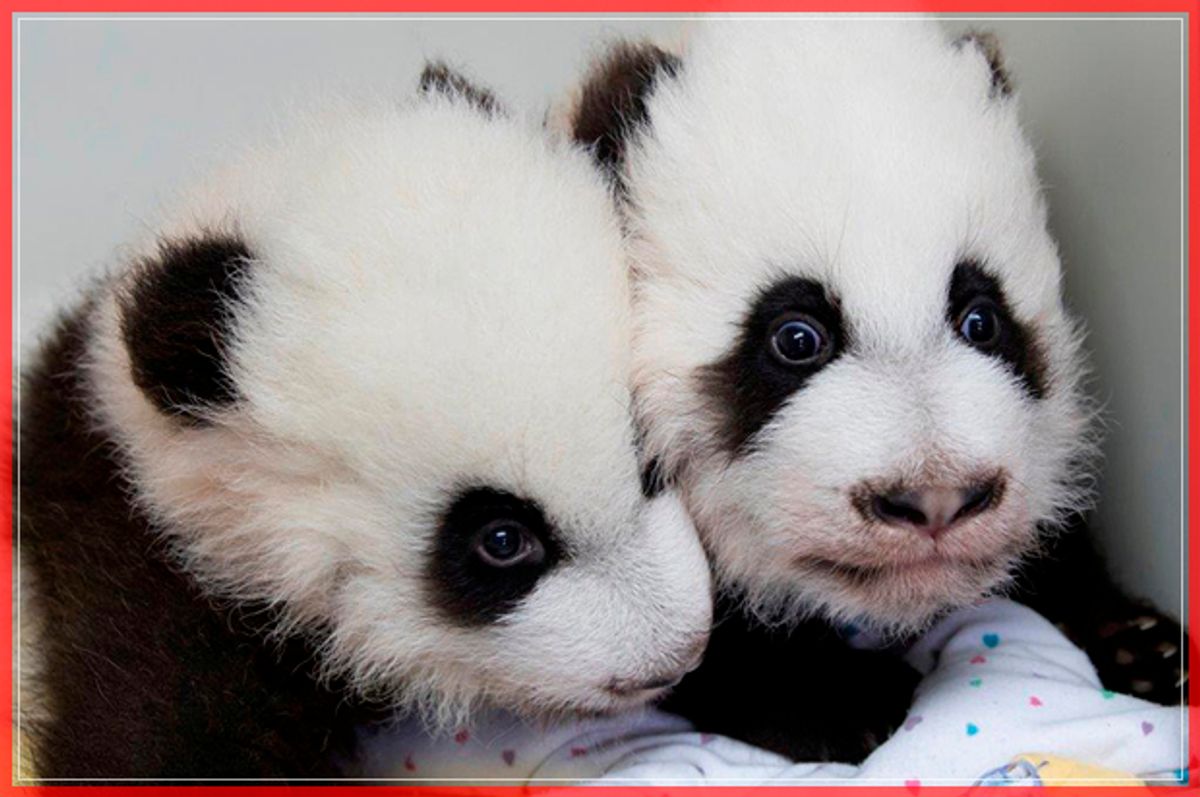 Giant panda twins Ya Lun and Xi Lun are seen in this handout photo provided December 12, 2016. Courtesy of Zoo Atlanta/Handout via REUTERS ATTENTION EDITORS - THIS IMAGE WAS PROVIDED BY A THIRD PARTY. EDITORIAL USE ONLY. NO RESALES. NO ARCHIVE. - RTX2UOZZ (Reuters)
--

Rio de Janeiro, Brazil   Silvia Izquierdo/AP
Police officers stand with flowers given to them by demonstrators outside the state legislature in Rio de Janeiro Outside the state legislature, In Rio de Janeiro, Brazil, flowers were given to police officers by activists during a protest against looming austerity measures. The legislation, which is opposed by 60 percent of Brazilians, is designed to fix increases in public spending to inflation for the next twenty years. Opinion is split between opponents the bill. Of those polled, 53 percent believe the Brazilian government has enough revenue, but spends it unwisely; and 36 percent believe that there is not enough public spending and the money that is available is allocated poorly.

Senators conclude their vote on the bill Tuesday.

Lisbon, Portugal   Rafael Marchante/Reuters
Children dressed as Santa participate in a parade to help raise food for the needy I had to do a double-take to make sure this wasn't a picture of New York SantaCon. But rather than rowdy adults dressing up for a bar crawl, these children in Lisbon, Portugal dressed up to gather food for the needy. In my family and for many people around the world, the holiday season is felt as a time for sharing joy in the form of gifts, and Kris Kringle is surely a symbol of giving—and eating cookies. Let's never forget the cookies.

Atlanta, Georgia   Zoo Atlanta/Reuters
The names of Giant panda twins, Ya Lun and Xi Lun, are announced 100 days after they were born, as per Chinese tradition Have you ever seen anything so beautiful and pure? These two pandas — twins! — look just like stuffed animals. Imagine wiggling your way in between them and watching television together? Or cuddling with them at night? Or using them as pillows? I don't think I've ever seen cuter animals. My sister is obsessed with pandas — we call her Amanda Panda — and she immediately comes to mind when looking at this photo. Amanda, come home!!! Creating art with snow comes with heaps of advantages, as these artists in Harbin, China are no doubt finding: The sublime look of white as snow sculptures against the winter sky speak to audiences of all ages. And the tools of the trade are quite inexpensive. But there's a massive downside. All this beauty is quite ephemeral. Indeed perhaps that's one of the tantalizing lures of working in this medium.