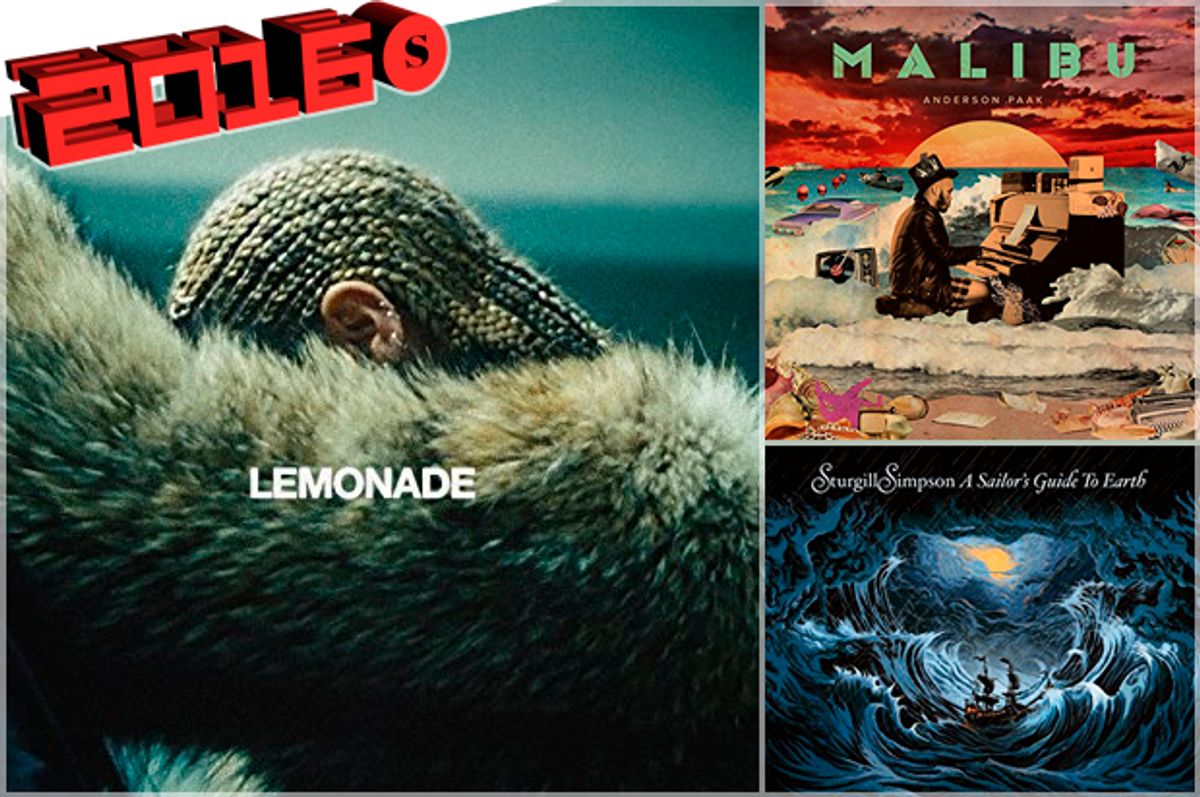 It’s been a turbulent year, to put it mildly. But musically, 2016 has been among the most consistent in recent memory — both in the short interval between great albums’ release and in the sheer volume of quality. The cream of the crop (here, the top three) would crack any year’s top five.

And the pool was deep, too; there were more than a handful of albums that nearly took the eight through 10 spots in my list. The through line was genre fluidity. With only a couple of exceptions, my favorite albums this year blurred the boundaries between hip-hop and R&B, rock and folk, country and soul, and so forth; the “neo” clause is especially useful these days. The result was a colorfulness that reflects the best parts of contemporary American culture while shining a light on the worst parts. Oh, if only we’d just listen.

On his third mixtape — are we really calling it a mixtape? — Chance yelps, whimpers and whispers. His voice is an instrument, one that is sui generis in its childlike ramble. That was true on previous releases, but here the way he twists and tangles his voice, the way it elevates the exultant production it’s all mature, fully realized. “Coloring Book” is an ecstatic, rapturous record. It seems almost divined in its originality and brightness.

“Lemonade” floats around the globe (the Caribbean, Texas, New York), flirting with different genres (R&B, hip-hop, rock) and inspiring a gamut of emotions. The constant is Beyoncé’s power — as she says on the hook of “Formation,” she “slays.” Immaculately produced, “Lemonade” is the tightest album of the year, no breath is wasted, no moment dull. And yet, it is also one of the year’s most ambitious: Beyoncé borrowed from sundry sources (Ezra Koenig, Led Zeppelin, the spoken word artist Malik Yusef) and seamlessly wove all of it into something that captured the Zeitgeist as much in its themes as in its release strategy. Yeah, the visual accompaniment is a feat on its own.

Simply as good as any rock album released this century, “Teens” is anxious but not angsty, clever but not pretentious; it treats college and what’s just beyond with pained, unsentimental love and curiosity. It’s the album I’ve listened to more than any other this year and one that I doubt will grow stale to my ears in the years to come.

Don’t be fooled by Mitski’s tenderness. She’s always on the verge of eruption. But don’t fear her either. When she does erupt — when her guitar-playing speeds, when her voice goes electric, when she howls — the most beautiful array of colors are spewed and a dazzlingly sweet molten shell forms.

This is Angel Olsen at her most refined — less folksy, a more futuristic rock star. Few moments in any 2016 release were more adrenalized than her "oohing" at the end of “Shut Up Kiss Me.” Though the production is cleaner and more minimal than in her previous albums, these songs are grounded in deeply felt loneliness and longing. Her quivering voice can fit any form.

“Malibu” was the first best release of the year (it came out Jan. 15) and has served as connective tissue between the genre fusion central to many of last year’s best hip-hop records and the successive hip-hop genre fusion of 2016. Anderson .Paak’s sophomore effort is light, full of soul and funk, heavy on rhythm. No record this year was smoother.

Does it take having a child to fully feel the awe and grandeur of life? Perhaps. Or perhaps Sturgill Simpson’s experience is a sufficient proxy. Simpson wrote “A Sailor’s Guide to Earth” for his now 2-year-old son. It’s full of “sea stories” and lessons though not so many of the country trope sort.

Instead, Simpson reckons with what he knows of life and imparts some Zen-like wisdom. "We're dying to live/ Living to die/ No matter what you believe,” he sings on “Brace For Impact (Live a Little).” But you don’t have to listen closely to the words. You can just soak in the soulfulness of Simpson’s singing and the surrounding electric-and-brass arrangements and feel his tender searching.

It was a year of excellent lasts — David Bowie and Leonard Cohen concluding their respective careers and lives with dark, haunting brilliance and A Tribe Called Quest's reuniting to release its first album in 20 years. Unlike Bowie and Cohen, Phife Dawg, who died in March, didn’t live long enough to hear the final product of what will be his final album.

But if he had, he would have had cause for pride. “We Got It From Here . . .” is cutting lyrically and cloudy sonically; in both ways, it couldn’t be more relevant. More directly, it’s also a tribute to Phife, whose rapping marks many of the album’s best moments and for whom much of the mourning energy is directed.

Some albums are meant to be listened to in cars because they complement a hydraulic bump. Others are because they’re hazy and atmospheric, best accompanied by a scenic view through a windshield. Frank Ocean’s long-awaited “Channel Orange” follow-up, “Blonde,” is the latter. Ocean sings and raps about love and solitude, depression, sex and, yes, cars; but it’s an album that is ethereal and airy above all else. “Bad luck to talk on these rides,” he sings on “White Ferrari,” “Mind on the road/ Your dilated eyes watch the clouds float.” Interpret his words as instructions, Ferrari optional.

If albums were judged based on their ratio of bangers to songs, “Prima Donna” would be the top album of the year. Just seven tracks (one of which is a short spoken-word intro), Staples’s third album is short but full of tireless beats that zip and thump. Staples keeps pace with lyrics that cleverly chronicle a life on the verge of remove from poverty in Long Beach, California. In between songs he allows exhaustion to creep in. “Fed up with the gun violence/ Fed up with the old rules/ Fed up with the youth dyin'/ I just wanna live forever/ I just wanna live forever,” he mumbles on “Prima Donna.” And then the banging resumes.