Salon Mix: 2016 was TV's best year ever for mental illness

What's so funny about depression, OCD and PTSD? Salon Mix reviews the year in mental health on TV 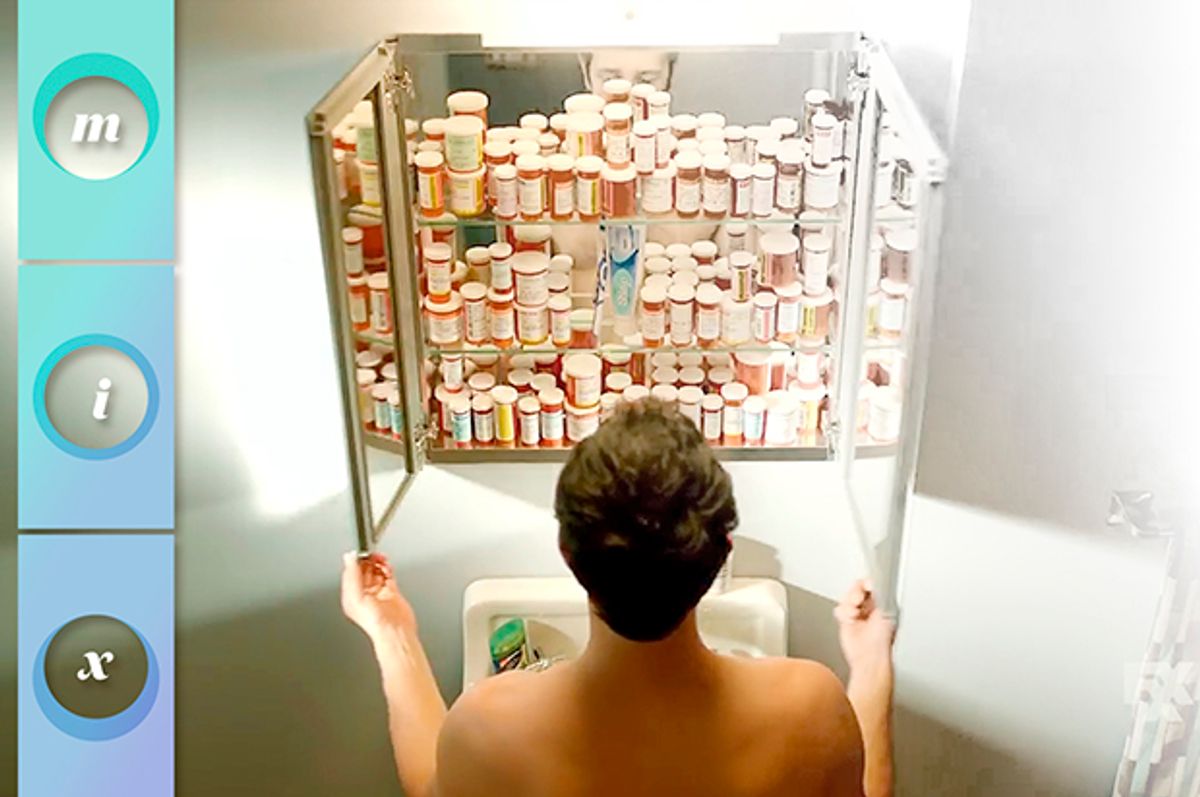 Feeling depressed lately? Anxious? Questioning the very fabric of reality? It's been that kind of a year. And if you spent a lot of it watching television for depictions of ideas, behavior and events that seem at the far end of the spectrum of normal, you certainly got more than you bargained for from the news networks alone. But in 2016, TV also responded to our often emotionally unhealthy climate in a number of healthy ways. It's been entertainment's best year ever for mental illness.

You may not have seen it in the news, somewhere underneath all the Zika headlines, but mental illness affects one in five Americans every year. And one in 25 — that's ten million people — will experience a serious mental disorder. Nearly seven percent of Americans live with "major" depression, and 18 percent have anxiety disorders. Mental disorders have been so taboo for so long, however, that in the past television has done less than a bang-up job of depicting that reality. When mental health has been incorporated into scripted TV storylines, most results have been far from nuanced — the many "psycho of the week" plots on the dozens of "Law & Order" series are sadly representative. Shows have conveniently introduced and then abandoned mental health issues for recurring characters, including eating disorders on "Gossip Girl" and "Pretty Little Liars," and Sheldon's OCD on "The Big Bang Theory," which is rarely mentioned. Mental illness has also served as an easy shorthand for "intelligent, yet difficult, yet quirky!" on shows ranging from "The Sopranos" to "Monk" to "House."

Fortunately over the past few years, there's been a shift. The stigmas and misconceptions around mental disorders have begun to erode, in no small part thanks to both ordinary individuals and public figures like Demi Lovato coming forward and sharing their stories about their conditions. Television has at last followed suit.

One of TV's boldest series, FXX's "You're the Worst," has from the beginning shown its characters grappling with a variety of issues, both diagnosed and undiagnosed, while deftly dancing around the show's romantic-comedy premise. But this year, the show went further than ever. Clinically depressed Gretchen (Aya Cash) started therapy, while post traumatic stress-wracked veteran Edgar (the consistently hilarious, heartbreaking Desmin Borges) tried to navigate the Veterans Administration for treatment in a bureaucratic system that doesn't quite know how to deal with what another character calls its "purposely broken motherf**kers."

In a phone conversation with Salon earlier this month, the show's creator — as well as frequent writer and director — Stephen Falk said that when the show first introduced Gretchen's depression in its second season, it was "a storytelling challenge."

"We thought, holy shit, this is a comedy, how can we then saddle one of the characters with raging clinical depression and watch her go through a cycle? That sounded extremely difficult to pull off, and thus something we had to try," said Falk.

In contrast, Falk notes that Edgar's PTSD was part of his character from the beginning.

"That was something that seemed more deserving of real estate," he said. "It [the PTSD] crept back in full force in season three. We watched him go off his meds for a girlfriend because it was causing sexual dysfunction, and we watched him then really get hit full in the face with all his symptoms and go up against the VA to get alternate treatment."

What makes "You're the Worst" particularly potent is not just its depiction of how mental illness affects those who have the disorders, but what it does to the relationships of those who love and live with the disorders, too.

"We deal with the fallout of mental illness on relationships, which I think is a very underserved theme," said Falk. A lot of people who've reached out [to us] are partners with someone who suffers, and it's made them feel a little less alone in their struggle."

The ripple effect of mental illness is an idea that played out very differently this year on "Empire," where the bipolar Andre learned that his grandmother likely had the same condition, and that his father hid the fact from him. "It would have weakened you," Lucious told his son. "I wanted to make you strong. . . . The real truth is my mother was a nutjob. I was embarrassed by her, the same way I'm embarrassed by you."

In its second season, "Unbreakable Kimmy Schmidt" also went deeper into its title character's mental health issues. Like Edgar on "You're the Worst," Kimmy has PTSD — an understandable response to spending half her life in a bunker as a kidnapping victim. In an episode this year, a former soldier met Kimmy in a bar and quickly sized her up, saying, "You've kind of got that look . . . like you've seen some stuff." "Actually," she replied, "I have seen some stuff."

For a show that's broadly, absurdly comical, "Unbreakable Kimmy Schmidt" also incredibly intelligent in its depiction of trauma and its understanding that even  hopeful, sunny, resolutely glass-half-full individuals like Kimmy can experience and suffer from it — and even fantasize about lighting a tormentor's spine like a firecracker.

Other shows have confronted their characters' disorders more obliquely, while still making it clear the issues are real. "Mr. Robot's" Elliot appears to have social anxiety and dissociative identity disorder — conditions the show's creator Sam Esmail worked with a psychologist on to get right for the character. Writing in Medium earlier this year, an anonymous author who lives with DID praised the show, asking, "Where else can I witness thousands of people engaging with the raw struggle that makes up my day-to-day reality?"

While "Bojack Horseman" doesn't come out and say its main character has depression, it instead lets the audience recognize it. Speaking with Vice this summer, creator Raphael Bob-Waksberg said, "The goal was never like, let's really create an expose, let's really investigate this kind of thing, let's diagnose BoJack in a certain way. I think it was more about just trying to write this character truthfully, and taking him seriously."

And on "Crazy Ex Girlfriend," co-creator Rachel Bloom plays a "profoundly disturbed person" who also romanticizes her "Sexy French Depression." (In real life, Bloom has also been candid about her own experiences with anxiety and depression.)

But the year's brand new MVP to the mental illness in entertainment game has been comedian Maria Bamford's weird, hilarious, autobiographical "Lady Dynamite." Bamford, who like her character has Type-II Bipolar, OCD and suicidal ideation, has a breezy, self-deprecating way of conveying the highs and lows of her conditions, and it's a big part of what makes "Lady Dynamite" so compelling and relatable.

In a Skype interview this month (listen to the full conversation here), Bamford told Salon that the response from viewers has been "just tons of awesome support and feedback saying, 'Its so nice to know about somebody else's experience.'"

In one episode, Maria performed a standup routine in which she asked, "Have you ever had a creepy thought, like, 'Oh, what if I licked a urinal? Oh god, I can't believe I just thought that. Oh god, I should probably do a complicated dance step and clench my fists at odd intervals just in case I fell over and by accident licked it.'" She then went on to explain to the audience, "That is a type of OCD. And the great thing is that you get to go to therapy and you get to hear what other people are worried about."

Bamford's authenticity brings an element to television's depiction of mental illness that it lacked in the past — empathy. Watching "Lady Dynamite," you don't laugh at the protagonist, you laugh at her situation and the pickles it gets her into. Bamford's fictional Maria, like Gretchen and Edgar and Kimmy and the rest, is someone whose mental health issues are part of who she is, not a slapped-on dramatic device. As comedian and "Conan" writer Laurie Kilmartin, whose comedy special "45 Jokes About My Dead Dad" debuts on Seeso December 29, observed to Salon, "It's almost like the mental illness is another character."

"[Maria's] mental illness is almost like a child or a pet that she has to take care of, in the way that everybody has to take care of somebody," Kilmartin said in a recent phone interview. "I like that she treats it like that. She expects everyone to know that about her and give her the room that she needs, just like she gives everyone else the room they need to manage the people in their lives they're taking care of."

This past summer, roughly 3,000 therapists signed a public manifesto warning that the current political climate is creating a "a threat to the well-being of the people we care for and to American democracy itself" and that "Trumpism will undermine the emotional health" of the nation's most vulnerable. It's a pervasive and valid concern, and it's encouraging to see this reality reflected in TV's fictional universes.

"This country, it feels to me, is going in a troubling way in terms of the resources we give to mental health," said Falk. "It's really disturbing to me. Even though ["You're the Worst" is] a romantic comedy, I would be remiss if I didn't try to tackle things that interest me and affect me and that I find don't get enough spotlights turned on them."

"I think any visibility is good," he added. "Anything that can make our art more complicated and interesting and strange, and actually tackle things real people go through, I think it's all good. I've talked to a lot of people who've reached out to me just to say that it has made them feel less alone."

Now, more than ever, we urgently need visibility for mental health issues. We need shows that depict people living their lives, seeing their shrinks, taking their meds and navigating their relationships with their friends and partners. That's how ignorance is banished; it's how people recognize themselves and their own stories and struggles. It's not therapy, but it's definitely cathartic.

"I think mental illness is being examined as just a normal aspect of many people's lives," said Kilmartin. "It does seem that once that door was opened, everybody else wanted to walk through it and say, 'Hey, I'm a little bit different. I'm odd in a way which is misunderstood. And if I could tell just you what it's like, it wouldn't be misunderstood. You'd get it.'"