"The wounded and dead are lying in the street": Aleppo cease-fire breaks down, trapping civilians

The evacuation from Aleppo has halted as fighting has picked up 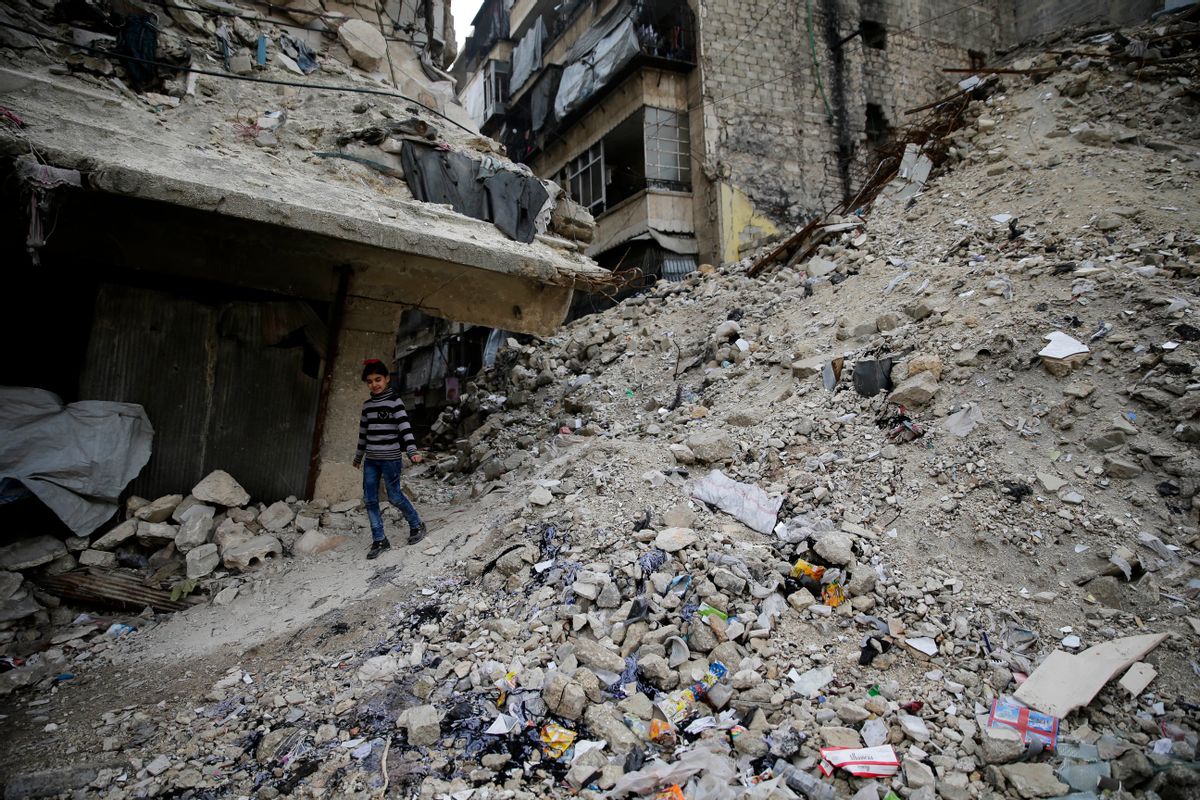 In this Monday, Dec. 5, 2016 photo, a Syrian girl walks amid the wreckage of damaged buildings and shops in the western city of Aleppo, Syria. (AP)
--

The civilians of eastern Aleppo, who were poised to evacuate the city as part of a deal brokered by Russia and Turkey, are now stuck in the Syrian war zone while heavy shelling resumes.

The ceasefire had been declared in Aleppo on Tuesday but broke down due to demands from the Syrian government, as the BBC reported on Wednesday. Activists in Syria are saying that air strikes over rebel-held territory have been resumed.

Buses that had been set up to evacuate civilians and injured fighters have been left vacant and inoperational despite being scheduled to start at 5 a.m. Aleppo time. Shelling was reported several hours later.

Early reports indicated that more than 40 people have been injured in eastern Aleppo so far. One activist told AFP that "bombing is ongoing, no one can move. The wounded and dead are lying in the street. No one dares to try and retrieve the bodies."

On Tuesday, the UN claimed that it had reason to believe summary executions had taken place in four areas against 82 civilians by pro-government forces. The UN has been denied access to Syria by the Syrian government and could not confirm that report, The New York Times reported on Wednesday.

“As the battle for Aleppo concludes, I call on the Syrian authorities and their allies, Russia and Iran, to honor their obligations under international humanitarian law and do the following: urgently allow the remaining civilians to escape the area and facilitate access for all humanitarian actors and the delivery of critically important assistance,” urged United Nations Secretary General Ban Ki-moon. “The laws of war and universal human rights must be respected.”

The United States ambassador to the United Nations, Samantha Power, asked officials from Syria, Iran, and Russia, "Is there literally nothing that can shame you?"

The Russian ambassador to the United Nations, Vitaly I. Churkin, responded by negatively comparing Power to Mother Teresa and arguing that although Russia had investigated claims of "ill treatment" of civilians, it had found "not a single fact."

The New York Times also claims that Iran played a role in skunking the ceasefire because it was upset that Russia and Turkey had been consulted while it had not.