Trump's pick for Interior matters, because right-wing pressure to sell off federal lands is heating up 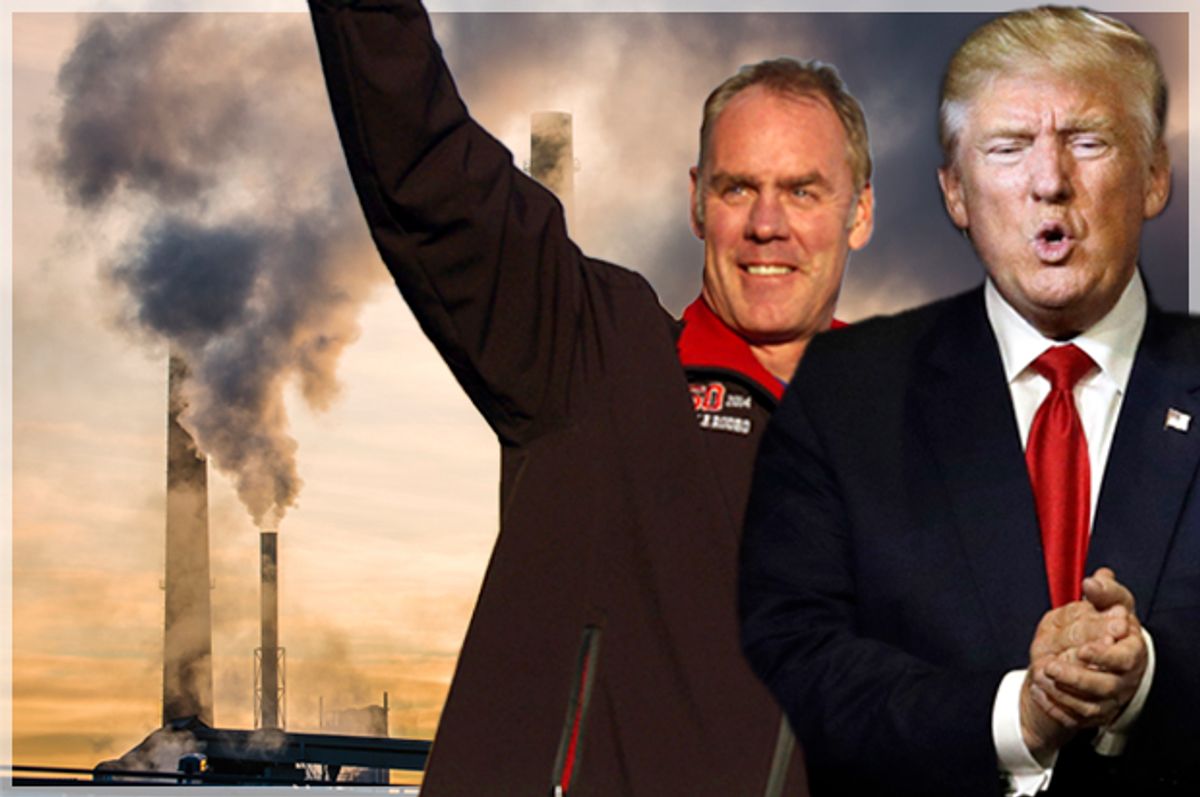 After a lot of chatter about Rep. Cathy McMorris Rodgers possibly getting the job of interior secretary, Donald Trump went ahead and grabbed another white guy for his cabinet: Rep. Ryan Zinke, a Republican from Montana, has reportedly been offered the chance to head the Department of the Interior.

While other cabinet picks, such as attorney general or secretary of state, inevitably garner more headlines, there's good reason to pay careful attention to Zinke's confirmation hearings and to the upcoming Trump administration's moves around the issue of federal land use.

“There is a big push right now to transfer federal lands to the states," John Sterling, the executive director of the Conservation Alliance, said in a phone interview. "I don’t think that’s something the public supports, but there are highly motivated members of Congress that would like to see that happen.

“There’s been talking about rescinding Antiquities Act designations, going back as far as the Clinton administration," he added, noting that this is something senators need to grill Zinke about in detail during his upcoming confirmation hearings.

As I reported back in July, there's a burgeoning movement on the right demanding that federally owned lands be turned over to the states. This movement is being packaged as a "states' rights" issue, but if you scratch the surface just a little, it's ultimately about corporate interests. As long as the federal government owns these lands, they can be protected from business interests who want to drill or log or develop real estate projects or otherwise exploit them for profit. But states can simply sell land they own to the highest bidder if they want, and they often do.

This may be part of the reason why seven members of a right-wing militia group, headed by Ryan and Ammon Bundy, were acquitted in October for taking over an Oregon wildlife refuge and occupying it for weeks. The militia's lawyers argued that the takeover was justified because it was a political statement against the federal government's overreach, and the jury seemed to buy it.

During the Republican presidential primaries, Ted Cruz started rolling out arguments against federal land ownership, suggesting that he believed these once-radical views are starting to gain traction among conservative voters. Trump, on the other hand, was dismissive of the whole scheme.

"I don't like the idea because I want to keep the lands great, and you don't know what the state is going to do," Trump told Field & Stream magazine when asked about the issue. "We have to be great stewards of this land. This is magnificent land."

The question now is whether the choice of Zinke to lead the Interior Department represents an about-face on this issue.

On one hand, Zinke has denied any intention of selling off public lands. "I will never agree with the transfer or sale of public lands,” Zinke told the Montana Standard in October. "I view our public lands as sacred and access to our public lands has to be part of it because we’re shutting gates, we’re closing roads and the public is losing access.”

Unfortunately, his actual voting record creates cause for concern. The League of Conservation Voters gives Zinke a 3 percent rating. His voting record on land management issues is especially dismal. He voted to undercut the president's powers to declare national monuments, a power that goes back a century and has been used to protect environmentally sensitive and culturally significant lands. He also consistently voted against any regulation that would protect public lands from environmental damage from business interests.

"While he has steered clear of efforts to sell off public lands and supported the Land and Water Conservation Fund, far more often Rep. Zinke has advanced policies that favor special interests," Jamie Williams, the president of the Wilderness Society, said in a statement. "His overall record and the backdrop of cabinet nominations with close ties to the fossil fuel industry cause us grave concern."

“Some of the things that Trump has said about public lands have been good," Louis Geltman, policy counsel for the Outdoor Alliance, said over the phone. "Public lands issues are probably not things that he’s spent a lot of time thinking about," Geltman added, "so I think it’s really on us to be super-vigilant and super-engaged and look for opportunities to share the priorities of all Americans about public lands.”

Most of the public agrees that federally owned lands are better kept in the hands of the government than turned over to states. This issue has a lot of cross-partisan appeal, as many otherwise conservative people enjoy hunting, camping and fishing — activities that become harder to pursue if public lands are sold off wholesale to private interests. A Colorado College State of the Rockies Project poll, conducted earlier this year, found that the majority of residents in seven key Western states, including overwhelmingly conservative states, opposed selling off federal lands.

"Public lands are an issue that can and should transcend the party divide," Alan Rowsome, senior director of government relations for lands of The Wilderness Society said over the phone. “When a Department of Interior Secretary is chosen, Americans expect that person to be a caretaker for and understand the responsibility they have in managing 650 million acres of our amazing public lands," he added.

“This election was not a referendum on conservation," said Sterling of the Conservation Alliance. "If anyone goes into that job feeling like they have a mandate to undo and totally change our public lands system, I think they’re in for an enormous backlash from the public, from the outdoor recreation industry and from everyone who loves the public lands for what they are.”

In a follow-up email, Sterling added that the Conservation Alliance is "encouraged that Rep. Zinke values our public lands system, and has spoken out against efforts to transfer federal lands to the states," and that conservation advocates must hope he brings those attitudes to the office.

Zinke's public statements and voting record appear to conflict on this issue of public land management. The Senate needs to grill him about his views on both federal land ownership and environmentalism, and the public should insist that lawmakers only vote to confirm someone who believes that federal lands belong to the people and must be protected from corporate interests.