Trump's catering worked: Why the Christian Right is head over heels about him becoming president 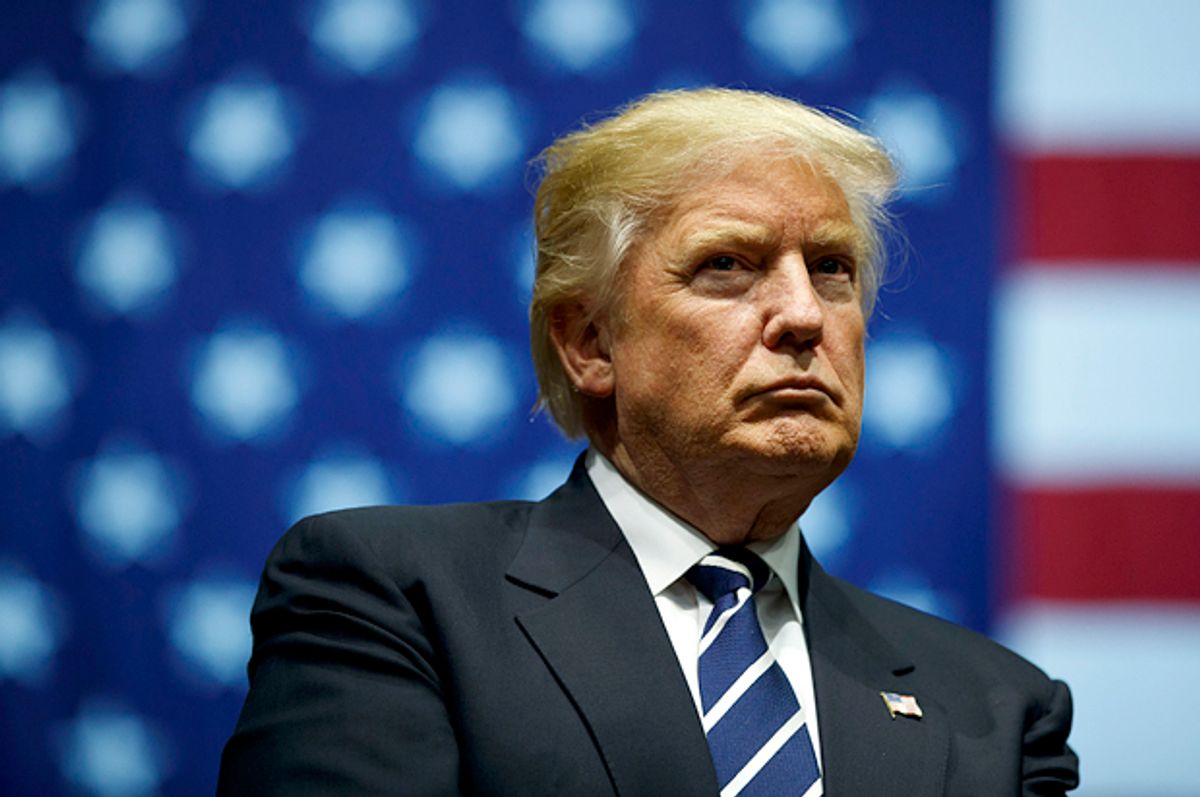 By the time the votes were tallied, 81 percent of white evangelical and born-again Christian voters had cast their ballots for Donald Trump to be the next president of the United States. Even though the real estate mogul is an adulterer now on his third marriage who has bragged about sexual assault, a large majority of the Christian right supported him.

Far-right Christian leaders also reflected this preference among their base, with some fervently backing Trump months ago or eventually coming around to the candidate as they feared an attack on their social values under a Hillary Clinton presidency. Now that Trump is the president-elect, most radical Christian leaders are on board.

“After eight years under the Obama administration, religious freedom has never been more endangered than it is today. Our nation has an opportunity over the next four years to make freedom mean something again,” said Tony Perkins, president of the far-right Family Research Council, the day after the election.

Knowing he would need to win over evangelicals in order to beat Clinton, Trump promised them much of what they wanted. He gave a well-received speech to hundreds of Christian conservatives in New York this summer and formed a 26-person “evangelical executive advisory board.” The board is almost all male, and according to the Southern Poverty Law Center, “stacked with anti-LGBT activists."

In Trump, right-wing evangelicals see someone who will protect them from what they view as liberal tyranny assaulting their religious freedom. Nonprofit churches want the right to engage in politics. Business owners want the right to discriminate against LGBT employees and customers. Religious private schools want states to fund voucher programs so low-income students can attend on the public dime. And perhaps most important to right-wing Christians is defunding Planned Parenthood, which Trump has pledged to do, and making abortion illegal, which he has signaled may happen. Trump told “60 Minutes” the Sunday after Election Day that he would appoint pro-life justices to the Supreme Court, and that if the court struck down Roe v. Wade, states could decide whether to allow abortion or not.

Perkins said that the election was “a rejection of a court that has acted as an oligarchy for the last four decades,” implying that a Supreme Court filled with Trump nominees could reverse women’s right to abortions and other laws his community opposes. The Family Research Council is labeled an anti-LGBT hate group by the Southern Poverty Law Center.

The American Family Association, which the Southern Poverty Law Center also considers an anti-LGBT hate group, put out a press release the day after the election titled “Trump Will Make America Great.” While calling both Trump and Hillary Clinton flawed candidates, president Tim Wildmon wrote that Trump “has promised to choose Supreme Court justices who will overturn Roe v. Wade,” in contrast to Clinton, who “promised to expand federally funded baby murder in the womb, continue failed Obama-era immigration policies and declared war on religious liberty.”

Right-wing evangelical leaders aren’t just happy Trump will be president — they’re thrilled Mike Pence will be second in command. “There is no politician whom I respect more,” said right-wing Christian leader James Dobson.

Pence is an evangelical Christian and a fierce opponent of abortion. As governor of Indiana he signed a law requiring fetal tissue from abortions to be buried or cremated, signed abortion restrictions and slashed funding for Planned Parenthood. He also holds bigoted views on LGBT individuals, opposing classifying attacks on LGBT people as hate crimes and supporting gay therapy.

The radical Christian right had a major victory in July when it took part in drafting the Republican Party platform. Perkins reportedly had a significant role in the process, having introduced amendments including one opposing the right of transgender people to use the bathroom matching their gender identity and another implying an endorsement of gay conversion therapy.

Some right-wing evangelical leaders were behind Trump well before the general election. Jerry Falwell Jr., president of Liberty University, the largest religious university in the country, was one of the first major right-wing Christian leaders to back Trump. He endorsed the candidate in January and stood by him through criticism from Liberty University students and after an Access Hollywood video surfaced in which Trump bragged about sexually assaulting women. On November 17, Falwell met personally with Trump and said that the president-elect had offered him the position of Secretary of Education, which Falwell declined.

Ralph Reed, founder and chairman of the Faith and Freedom Coalition and chair of Trump’s evangelical advisory board, told The Washington Post that Trump “stated his shared commitment to [evangelical] issues, including life, religious freedom, judges and support for Israel.”

Jim Daly, president of Focus on the Family, applauded the prospect of Trump’s Supreme Court appointments, his “pro-life pledge” and promise to defund Planned Parenthood. Daly wrote that he’s optimistic about Trump’s “pledge to champion pro-religious liberty policies and once again welcome faith in the public square.” Focus on the Family supports a bill introduced in the House in September called the “Free Speech Fairness Act,” which would allow churches and other 501(c)(3) nonprofits to engage in certain political activity, which the Johnson Amendment banned in 1954.

The Alliance Defending Freedom, a huge, far-right Christian legal team that fights for anti-LGBT laws, proclaimed that in the election, “the American people stood up and said ‘no’ to an anti-life agenda and partial birth abortion.” “We do know that we have an opportunity to move forward in our defense of religious liberty, the sanctity of life, and marriage and family in ways that we never expected,” stated the group.

Some prominent far-right Christians who didn’t initially support Trump came around eventually. James Dobson, who founded the Family Research Council and Focus on the Family, came down very hard on Trump earlier this year, saying he couldn’t support Trump based on his gay marriage stance and recording a robocall urging Republican voters to support anyone but Trump. But in July, Dobson endorsed Trump, saying his primary concern was the Supreme Court appointments. Dobson hailed Trump’s win as “good for America,” stating it is “a reaffirmation of the importance the American people place on religious liberty, the sanctity of human life, and a conservative judiciary.”

Franklin Graham, president of an evangelical association named after his evangelist father, Billy Graham, gave a tacit endorsement of Trump in October, writing, “This election is about the Supreme Court and the justices that the next president will nominate.” After the election, Graham told his followers that God led Trump to victory.

Bob Vander Plaats, the influential conservative Christian leader in Iowa who runs the Family Leader there, did not endorse a presidential candidate and even feuded with Trump during the primary. But after the election, he wrote that his group successfully “engaged thousands around the world in praying for God's hand on this election.” The church’s “awakening,” begun during the election, could “be a historic victory for a revived America,” he said, evoking Trump’s campaign slogan, “Make America Great Again.”

Trump and Pence aren’t the only good news for right-wing Christians. Trump’s nominee for education secretary is Betsy DeVos, a Michigan billionaire and Republican mega-donor who has spent much of her life promoting the use of taxpayer dollars to send children to religious schools. She once described her education reform work as “a biblical battleground where she wants to ‘advance God’s Kingdom.’”

Some evangelicals had more tepid reactions to Trump’s win.

Russell Moore, president of the Ethics and Religious Liberty Commission of the Southern Baptist Convention, was never a fan of Trump's, and the day after the election, Moore wrote, while he opposes “abortion culture” and “divorce culture,” he also opposes the “racism/nativism culture” that Trump has stirred. We are “part of a Body,” he wrote, “a Body that is white and black and Latino and Asian, male and female, rich and poor.” He implored Christians to stand up for what they think is right. “We should be ready to pray and preach, to promote the common good and to resist injustice.”

Having been outspoken in her opposition to Trump, Christian author and radio show host Julie Roys called him “arguably the most morally flawed person to ever hold our nation’s highest office” on Nov. 9. While warning against the prospect of a socially liberal Republican Party and calling for unity, she also encouraged evangelicals to “reach out to the disenfranchised” and to “heal the gender gap.”

Albert Mohler, president of the Southern Baptist Theological Seminary, wrote in October that evangelicals faced an “excruciating crisis” of conscience in determining whom to support for president. Mohler wrote that he saw “evangelical support for Trump as a horrifying embarrassment.” Two days after the election, however, Mohler said on his radio show that now Trump has an “incredible opportunity” to nominate someone in the mold of Antonin Scalia to the Supreme Court, something Mohler strongly supports.

Trump may have pretended to care about issues dear to evangelicals to get elected, but by welcoming a significant right-wing Christian presence among his advisers, transition team and Cabinet, he could usher in a conservative social policy shift for which the radical Christian right has been fighting for some time.