Trump's unfocused management style might lead to apocalypse. But, hey, it could play well for the Democrats! 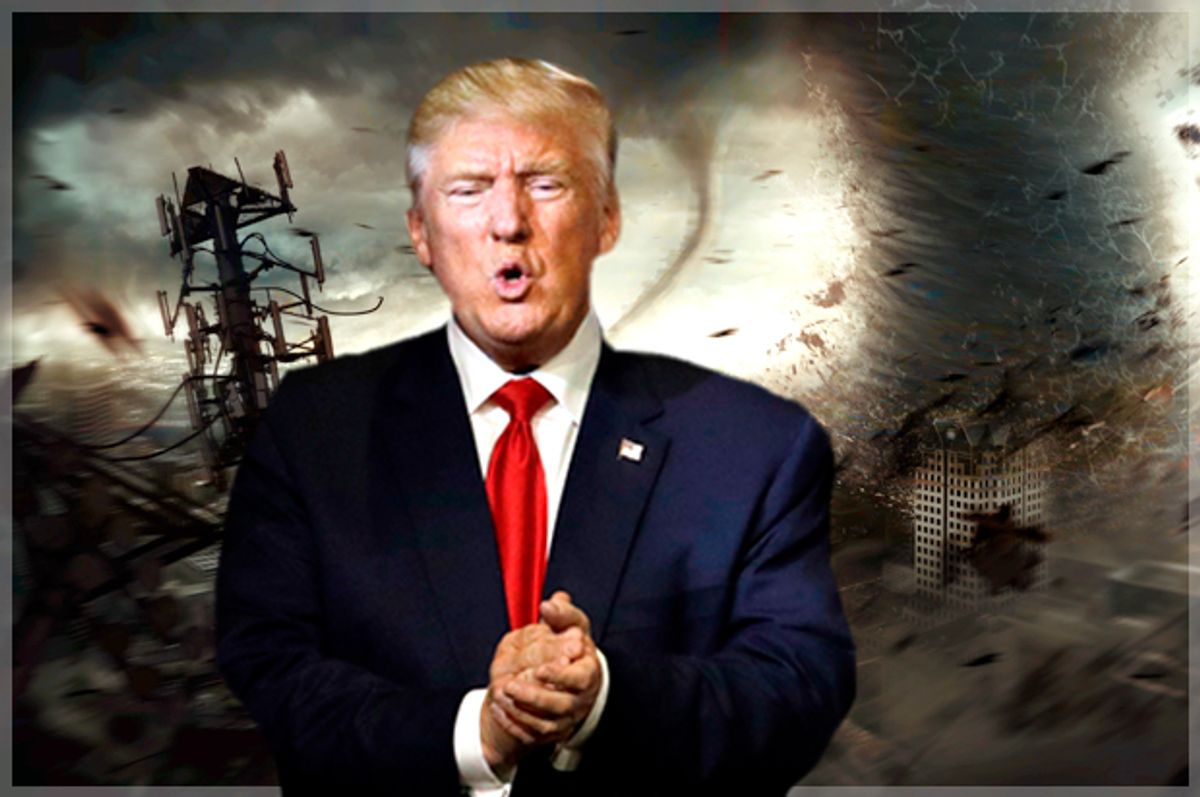 On Wednesday Donald Trump made an interesting comment to a room full of Silicon Valley technology moguls who had trekked to Trump Tower to kiss his ring. After extolling their uniqueness and encouraging their continued “innovation,” the president-elect added:

We’re going to be there for you, and you’ll call my people, you’ll call me. It doesn’t make any difference. We have no formal chain of command around here.

It might have been an offhand remark, and who knows if this ambulatory clownfish who will soon be the leader of the free world even remembers what he says from minute to minute. But it does fit with some other reporting about infighting within the Trump transition, the reporting structure already being established for the West Wing, and Trump’s known history of running his companies as loose ships.

What is difficult to predict is how the chaos that Trump’s managerial style is likely to inflict on the White House will affect the next four years. The president-elect has already set up a potential steel-cage match in the West Wing by naming Reince Priebus, avatar of the GOP establishment, as his chief of staff, while at the same time appointing Steve Bannon, voice of the populist movement that propelled Trump to victory in the election, as his senior advisor. In a meeting the day their new jobs were announced, Trump reportedly walked the two men through a structuring of the West Wing that left them both confused and unsure of who in the White House will be reporting to whom.

In essence, the administration will have dual power structures, with Trump at the top of both, deciding who wins out based on who knows what criteria. It is in keeping with how he has run companies his entire career, by reportedly pitting executives against each other and sitting back to watch the chaos.

In addition, there will be Trump’s even-more-inner circle, primarily composed of his family members, particularly daughter Ivanka Trump and her husband, Jared Kushner. Trump’s closeness to both has been well documented. He has reportedly tried to figure out how to add both of them to his administration, and a report on Wednesday said that Ivanka will be taking over office space normally reserved for the first lady while Trump’s wife, Melania, stays in New York for at least the rest of her son Barron’s school year. Even when she presumably moves down to Washington, Melania has shown little interest in taking on the duties of a first lady.

The backstabbing and chaos engendered by Trump’s management style might have been fine when it was his own companies that he was running into multiple bankruptcies. But it’s a measure of either how deeply isolated he is within the bubble of his own ego or how little interest he has in the day-to-day work of the presidency – or likely both – that he plans on replicating this style in a position where there's more at stake than a food-service contract. There are millions of lives depending on the decisions he will make every day in the White House, and he is going to make it harder on himself by purposely pitting two different groups against each other, like a little kid tossing a feral cat and a mongoose into a burlap sack and tying it shut.

On the other hand, the coming chaos might present an opening for Democrats to help stymie Trump’s legislative agenda, whatever that turns out to be. Back in the 1990s, Bill Clinton’s freewheeling and undisciplined style sometimes hamstrung his own White House’s legislative pushes. One of the reasons the Obama administration succeeded in pushing through the Affordable Care Act and other major legislation, despite the unending GOP obstruction, was a discipline and focus that kept scandals and outside distractions to a minimum.

That’s not to say there were not power struggles and titanic egos battling each other in the Obama White House. But on balance they didn't get in the way of governing, no matter what the GOP threw at them in terms of obstructionism and distracting investigations. The Democrats don't hold power in either house of Congress, but if they are smart – I know, but stick with me on this – they can still make day-to-day life in the White House even more unfocused and bewildering than it is already likely to be.

There is little reason to think that Trump genuinely cares about passing any of the legislation he has promised in the first place, like immigration reform or repealing and replacing Obamacare. He is likely much more interested in the trappings of office, the opportunities for enriching his own family and the stroking of his own ego by other world leaders and sycophants. Despite the momentum he and the Republican Party seem to have at the moment, his own deficiencies as a manager and leader may wind up helping liberals much more than they have anticipated.