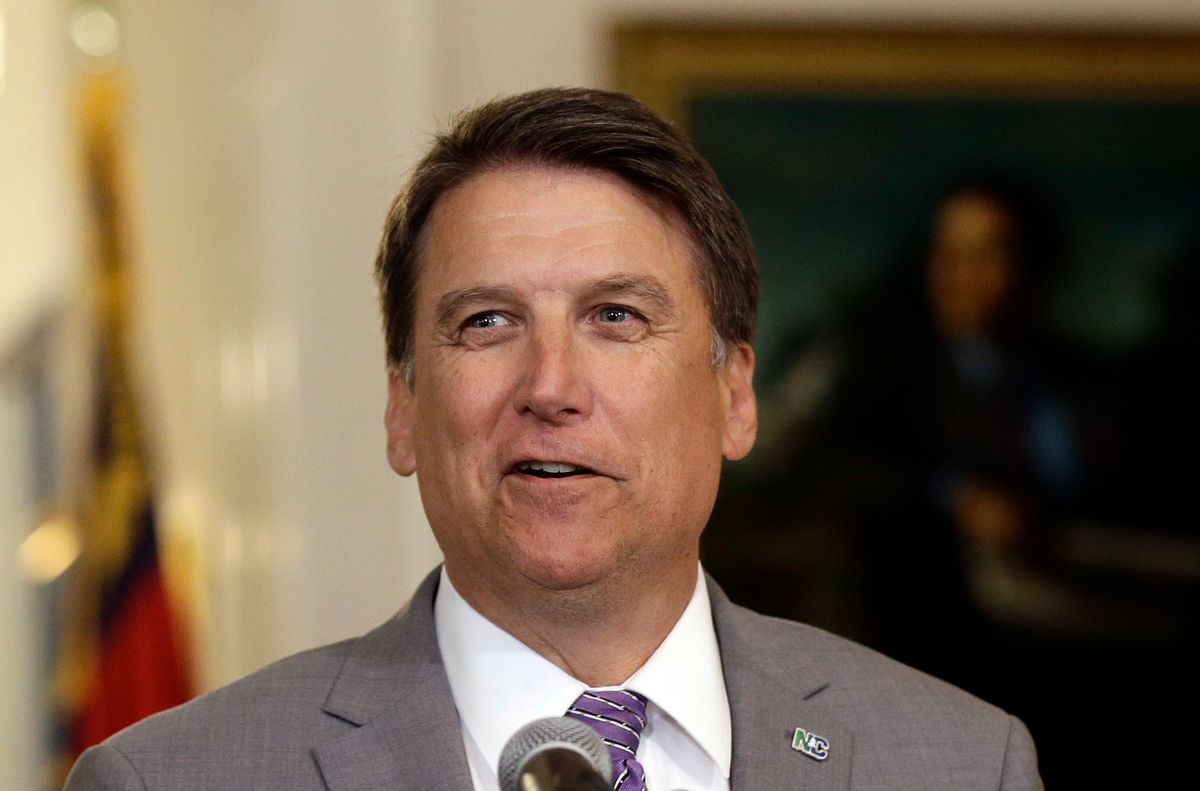 In this photo taken Monday, May 9, 2016 Gov. Pat McCrory makes remarks regarding House Bill 2 during a news conference in Raleigh, N.C. The North Carolina governor's race is everything voters anticipated it would be: expensive attack ads and barbed debates before what's essentially a referendum on the state's recent rightward tilt under Republican rule, particularly the state law limiting protections for LGBT people _ known as House Bill 2. (AP Photo/Gerry Broome, File) (AP)
--

North Carolina's lame duck Republican Governor Pat McCrory did not act as a check on the supermajority of Republican legislators who reacted to his ousting by Democrat Roy Cooper by calling a last-minute special session to curtail executive powers. Instead, McCrory signed into law a series of bills Friday that Democrats have blasted as an unprecedented "power-grab," setting up a court battle.

Amidst the second day of protests at the state capitol in Raleigh, McCrory signed legislation passed strictly along party lines by Republican legislatures who took advantage of a session mean to address disaster relief for Hurrican Matthew survivors.

The new laws significantly reduce the powers of the governorship before McCrory's replacement, a Democrat, takes office on Jan. 1, and bolster a party that has only been gerrymandered into power.

SB4, one of the most far-reaching laws, aims to change the ideological makeup of the state's election boards. Currently, the state election board is made up of five members, with three from the governor’s party. SB4 gives the board eight members — four Democrats and four Republicans.

Under the new rules, the State Board of Elections is merged with the State Ethics Commission, increasing its size. GOP changes also require that Republican Party appointees chair the board during even-numbered years when there are legislative, congressional, and presidential elections.

McCrory also signed other legislation meant to subvert the will of voters who elected Cooper and a Democrat Supreme Court justice to be a check on the Republican legislature. McCrory was one of the last incumbents in the nation to concede defeat earlier this month after Cooper’s lead grew to more than 10,300 votes, out of more than 2.6 million votes cast.

After a Democratic candidate ousted a Republican incumbent, though both candidates ran without party labels, leaving a 4-3 Democratic majority on the high court, Republicans rushed to write a law ensuring candidates running for state Supreme Court seats are identified by their political party.

McCrory signed another bill to limit the number of appointees Cooper will be able to make to 300, from the 1,500 increase Republicans allotted for the GOP governor in 2012. The new law also now requires the Republican-controlled senate sign off on Cooper's Cabinet picks.

The legislature also passed a bill that will give McCrory the power to appoint the head of the state’s Industrial Commission, which hears appeals of worker compensation claims, to a six-year term. McCrory nominated Yolanda Stith, a former lobbyist and his chief of staff’s wife.

“One of the reasons they want control of my appointments,” Cooper explained of Republican legislatures during an appearance on MSNBC Thursday, “is because they want big tax cuts for corporations at the expense of the middle class.”

The House and Senate have already moved to confirm her.

For his part, McCrory has stayed quiet since the election and hasn’t spoken to the press during the GOP's power move this week.

Democratic lawmakers, however, have filed a protest over the way this week's second special session was convened, calling it unconstitutional.

“This ain’t right,” House Democratic Leader Larry Hall of Durham told the Raleigh News & Observer. “You can’t make it right. The people of North Carolina aren’t being treated right. We owe them more.”

According to ABC, at least 18 protesters have been arrested protesting Republican legislatures and McCrory on Friday.