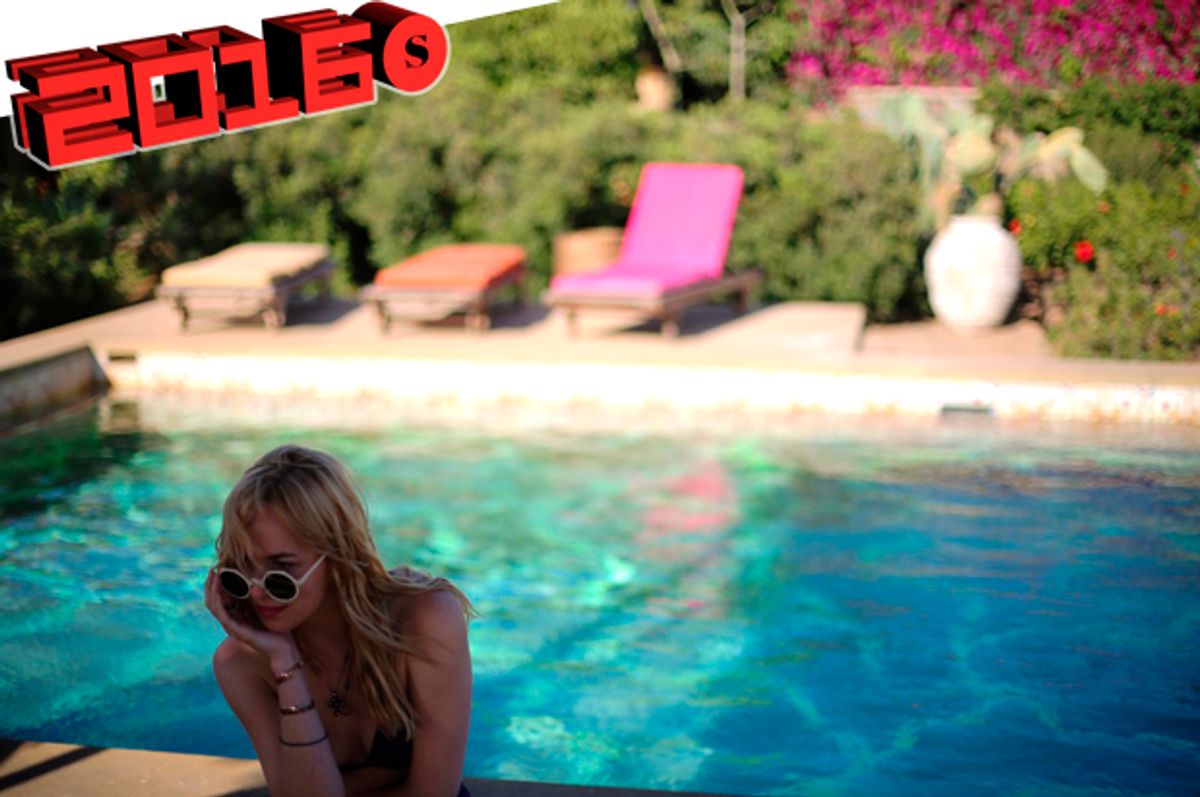 Ten Best Films of the Year lists are always a challenge. How can you compare something epic or artful against something entertaining? And are those two qualities mutually exclusive? To say one film is better than another is to evaluate them on the same criteria, or that they were made with the same resources, intent, or audience. So forget that and let’s go not with what’s best but with what’s memorable. And why 10? How about 12?

Looking back on the films released theatrically in 2016, these dozen features provoked strong reactions, anger, laughter, and compassion, that will infect viewers for days, weeks, even months later. These are the 12 most memorable titles from this year (in alphabetical order, because how can one rank them?).

“A Bigger Splash” One of the year's biggest conversation starters, this “thriller” begged people to debate: Could Ralph Fiennes’ indelible character be any more irritating? How clever was it for Tilda Swinton to play a rock star with laryngitis? Isn’t that Matthias Schoenaerts sexy as hell? And what was really going on with Dakota Johnson’s character? Folks, just soak it up like the mostly naked characters around the pool soak up the sun, and let the heated discussions begin.

“Christine” Rebecca Hall’s phenomenal performance as Christine Chubbuck, a Sarasota newscaster struggling over her own self-worth in the 1970s, consists of a series of such intense, specific moments that viewers may feel they are eavesdropping on her life. As her character suffers a series of personal and professional setbacks, things culminate in a riveting encounter session that articulates her frustrations before she commits a devastating act. Director Antonio Campos wisely doesn't sentimentalize Chubbuck’s story, and his touches — from a light literally going off behind a handgun in a shop to an ironic ending — are inspired.

“Les Cowboys” This extraordinary French film, a loose but brilliant adaptation of the classic Western “The Searchers,” was such a hypnotic journey that it’s hard to discuss its many pleasures and dramatic reversals without spoiling the experience for viewers. Suffice it to say, when a father (Alain Balland) takes his son (Finnegan Oldfield) to search for his missing daughter, the discoveries they make are both heartbreaking and shattering.

“Everybody Wants Some!!” There may not be a more pleasurable film this year than Richard Linklater’s low-key comedy about a group of college baseball players sharing a house in 1980. From the music and dancing, to the period cars and costumes and the laid-back camaraderie of the guys, this easygoing film was one long, enjoyable party that produced nothing but good vibes.

“The Fits” In her screen debut, Royalty Hightower has such an incredible presence on screen, it is like watching a star being born. Ana Rose Holmer’s offbeat drama about a teenager coming of age transcends every cliché, becoming something entirely unique and magical. Hightower’s expressions and body language so deftly convey her character’s attitude, integrity and vulnerability that she fascinates us even more as everyone around her is experiencing unexplainable epileptic-like fits. Truly superb.

“Lamb” Writer/director/producer/star Ross Partridge (“Stranger Things”) adapted Bonnie Nadzam’s novel, turning it into a haunting indie drama about the relationship between a 47-year-old man (Partridge) and Tommie (Oona Laurence), a pre-teen girl. The shifting dynamic of their relationship keeps viewers on tenterhooks as it reveals the emotional bond that develops between them. It’s an uncomfortable film for sure, but Partridge displays tremendous grace as a director, and Oona Laurence delivers a knockout performance.

“A Monster with a Thousand Heads” This timely, nerve-wracking Mexican thriller has Sonia (Jana Raluy) with gun in hand and teenage son in tow, tracking down the caseworker, the insurance company CEO, and even the shareholder she needs to sign the paperwork to get her husband’s denied medical treatment approved. Masterfully shot and edited, and capturing the palpable frustration of anyone who has faced a lack of compassion when having to deal with bureaucracy, “Monster” is short (75 minutes), sharp and essential.

“Moonlight” The tender, troubled life of a gay, African-American man as told in three stages, and with three actors, was the year’s biggest sleeper. It deserves all of its praise. Barry Jenkins takes our understanding of identity, masculinity and sexuality to the next level by presenting the inchoate male inability to communicate and making it at once moving and humbling.

“Presenting Princess Shaw” This fabulous documentary introduces moviegoers to Samantha Montgomery (aka Princess Shaw), a singer who gets an incredible, unexpected break when, unbeknownst to her, halfway across the world, the musician Kutiman creates videos using her a cappella songs. While the film is a product of and testament to our YouTube/reality show age, what grounds this fairy tale is Princess Shaw’s resilience and candor — which is as heartfelt and inspiring as her singing.

“Toni Erdmann” From the opening moments when Winifried Conradi (Peter Simonischek) makes a wisecrack to his postman, to scenes of his daughter Ines (Sandra Hüller) belting out “The Greatest Love of All,” or throwing an unconventional party for her co-workers, “Toni Erdmann” distinguishes itself by being daring, pointed and funny all at once. This 162-minute German comedy about the relationship between a prankster father and his uptight daughter is an astonishing high-wire act that induces gasps, belly laughs and tears in equal measure as it reveals how we sometimes need to lose control to gain control.

“White Girl” Morgan Saylor gives one helluva performance as Leah, a college student taking so much drugs (the white girl of the title) that viewers may want to shout “Enough!” at the screen. She also has some explicit sex with her boss Kelly (Justin Bartha), and some non-consensual sex with a sleazy lawyer (Chris Noth) she hires to spring a boyfriend from prison. Based in part on writer/director Elizabeth Wood’s real life(!), this is a gritty, compelling and sensational film — yes, Leah did just snort coke off Kelly’s cock! Beautifully filmed, it is also the worst “What did you do over the summer?” story ever.