"Chefs do that": The underappreciated holiday joy of "The Long Kiss Goodnight"

Geena Davis's 1996 action flick doesn't get the respect it deserves. Then again, neither does holiday domesticity 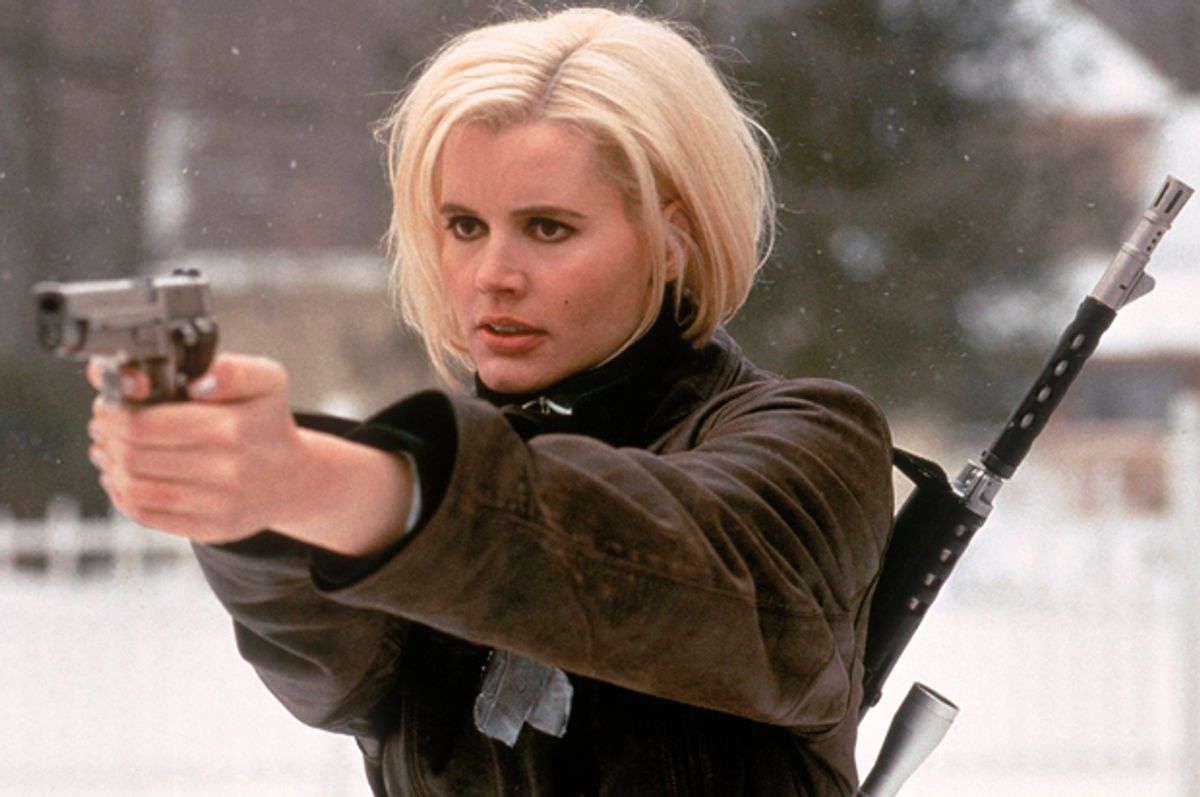 At some point within the next 72 hours my annual ritual of cookie baking will commence. Everything is made from scratch, and the creation and baking of each confection must be scheduled. The oven will be preheated to 350 degrees by around noon and won’t turn off until the flour or the butter is gone and the last gingerbread man is finished. Only when the ammo runs out does the day end.

This campaign kicks off with my husband ceremonially breaking out the DVD of our favorite holiday movie, a story that celebrates the domestic arts and femininity in an entirely sideways fashion: “The Long Kiss Goodnight,” the 1996 action flick starring Geena Davis and Samuel L. Jackson.

Many people have never seen “The Long Kiss Goodnight,” let alone heard of it. Those who have may find the above description puzzling, given its plot. Not the part about it being a Christmas movie, which it is in the same way that “Die Hard”  and "Lethal Weapon" are Yuletide flicks.  The bullets start flying about a week or so before the holiday and the action ends with massive explosions and blood-soaked faces on Christmas morning. Merry merry, everyone.

The other details about its role in validating home and hearth-keeping require some explaining. First, a bit of background: “The Long Kiss Goodnight” is one of the films Davis starred in while married to Renny Harlin, the hacktastic director who also persuaded his then-wife to star in the abysmal “Cutthroat Island.”

While it sounds as laughable as the couple’s high-seas disaster, and was critically drubbed when first released, "The Long Kiss Goodnight" has since earned its place as a cult favorite. Davis plays Samantha Caine, a frumpy amnesiac who shares a comfortable small-town life with her nice-guy partner Hal (Tom Amandes) and her eight-year-old daughter Caitlin (Yvonne Zima). She remembers nothing about her life prior to the night she woke up in a hospital, pregnant with her girl.

Though Samantha still seeks answers about her true identity and hires a low-rent private detective, Mitch Henessey (Jackson), to find some details, she’s made peace with her life as it is. “The woman I was? The one I used to be? She’s gone,” Samantha declares as the film starts. “I’ve kissed her goodnight.”

But her former self, Charly Baltimore, counter-terrorism agent and elite killer, isn’t done.  After an ugly crash sends Samantha flying through her car’s windshield, Charly starts to emerge.

The first clue that something’s changed comes in the kitchen — where else? — where Samantha begins cursing up a storm and impaling vegetables with knives. “Chefs do that!” she chirps happily after skewering a tomato. A scene or two later our devoted member of the PTA gets a visit from a vicious shotgun-wielding former associate, and she puts him down by cracking a glass pan full of Baked Alaska across his skull, delivering the coup de grace with neck-snapping hand strike.

She licks the swirls of cream and blood off her fingers, looking up triumphantly. “Chefs do that,” she purrs. Hal is terrified. The baker in me is thrilled every time.

The script for “The Long Kiss Goodnight” is by Shane Black, who wrote the first “Lethal Weapon” and, much more recently, wrote and directed “Iron Man 3.” Though “Long Kiss” brims with quotable one-liners, the best of which benefit from Jackson’s signature oomph, it doesn’t take a detective to figure out why this particular film was so poorly received. Even today you can only find it on DVD. It doesn't stream on any major services, and is not currently scheduled to air on any cable channels. ("Die Hard" and "Lethal Weapon," meanwhile, will air on IFC on Christmas Eve.)

Film reviewers, most of them male, had a tough time seeing Davis as an action heavy. But the larger the problem lay in Samantha Caine’s normalcy. Samantha wasn’t forced to battle for her life like Ripley had to in “Aliens,” or heeding a higher calling, as Sarah Connor did in “Terminator.” She was just an average, memory-impaired lady putzing around in hideous denim overalls, unironically wearing twinkling LED light earrings and ugly Christmas sweaters.

It probably didn’t help that “The Long Kiss Goodnight” came out in the same year that yielded the first “Mission: Impossible,” John Woo’s “Broken Arrow,” and another high profile, hyped-to-the-skies action flop headlined by a woman. That would be “Barb Wire,” starring Pamela Anderson.

Anderson's Barb Wire was a gun-toting sexpot and a fan of softcore-style bubble baths in glass tubs, thereby falling into acceptable boundaries for female action characters of that era. Davis’s Charly also had a shower scene, but for a reason — she needed to clean up after killing seven men. The camera lingers more on the blood in the water at her feet than it does on her skin. (Plus, she had to do something about Samantha’s basic hairstyle.)

Point being, Black wrote Charly Baltimore as a heroine unlike most of the ones seen previously — a sweet, happy schoolteacher who happened to have a pragmatic world-class killer sleeping inside her. Hollywood loves stories of lethal women, just not the ones who start their journeys wearing charm bracelets while pressing rice cereal treats into a pan.

But Davis’s character represents a truth women live with year-round, the need to fulfill multiple roles while sublimating a sleeping fury. We are the gift wrappers, the turkey roasters, and the peacekeepers at the holiday dinner table. For women in general — and home cooks and holiday crafters in particular — Samantha Caine/Charly Baltimore is a patron saint.

The holidays are a hectic time of frenzied end-of-year work projects followed by evenings and weekends of frantic errands as we gear up for that special day celebrated, by most of us, by sitting on our butts. Unless you’re the one cooking Christmas dinner.

And though culinary and craft culture is still very much on trend, longer work hours combined with the rise in services that create the illusion of handmade items “just like mom used to make!” has led to something of an underappreciation for those of us who scratch out the real deal in the kitchen.

Throw in our national obsession with treating carbs as if they were terrorists, and the home baker can be in a frustrating spot these days. People who aren’t monsters appreciate any effort loved ones make on their behalf, but for some, a plateful of baked cookies often falls into the “it’s the thought that counts” category. I’ve even encountered a situation in which I’ve taken baked goods to a person who asked if we’d be exchanging our “real” gifts later. (That person is no longer on my cookie list.)

To be fair, once Charly Baltimore emerges, she’s not exactly a fan of domestic life either. “Turn on the TV. Farm in New Jersey. Seven dead,” she growls to her former supervisor when she decides to check in with him years after going dark. “I completed my assignment . . . Actually, I would have done it earlier like, say, back in ’92? But I was baking. Don’t ask.”

It’s OK, Charly. We get what it’s like to be busy.

Without giving away the minutiae of the movie’s ridiculously pleasurable plot, “The Long Kiss Goodnight” winds down with a picnic that includes a peaceful fried chicken dinner and, just to keep everyone on their toes, a thrown blade that hits a bullseye. The knife hums as it bites into its target, and Charly – or is it Samantha? – smiles contently at a job well done, both with the lunch and at knowing she still has formidable skills.

This recipe predates "The Long Kiss Goodnight" by many years (I'm pretty sure I copied it out of the Chicago Tribune way back in the '80s)  and is otherwise known as Chocolate Covered Cherry Cookies. What makes them killer is replacing the maraschino cherries in the original recipe with good quality brandied ones.

•Brandied cherries. If you don't want to purchase a jar, The New York Times has this recipe; try it with frozen cherries. On the downside, you'll want to let them sit for two days for maximum flavor. (Just buy a jar. Seriously.)

Heat oven to 350 degrees. Optional: slide "The Long Kiss Goodnight" into your media player of choice.

In a separate bowl, cream the butter and sugar until fluffy. Add egg and vanilla, and beat well.

Gradually add your dry ingredients and stir until combined.

For the cookies, shape the dough into 1-inch balls, indenting each with your thumb.

Place a cherry (preferably on the dry side; dab with a paper towel if need be) into each indentation. But save that juice!

Now, make your frosting. Put the chocolate chips and condensed milk into a small saucepan. Heat until the chocolate melts and stir until smooth. Stir in the cherry juice, or liqueur. If it's too thick, add more juice.

Spoon about a teaspoon of frosting over each cherry and cover it completely.

Bake for 10 minutes or until done; check them around 8 minutes in. Remove to a wire rack and cool completely.