Born of compromise, the Electoral College became a mechanism of party politics — and that's not likely to change 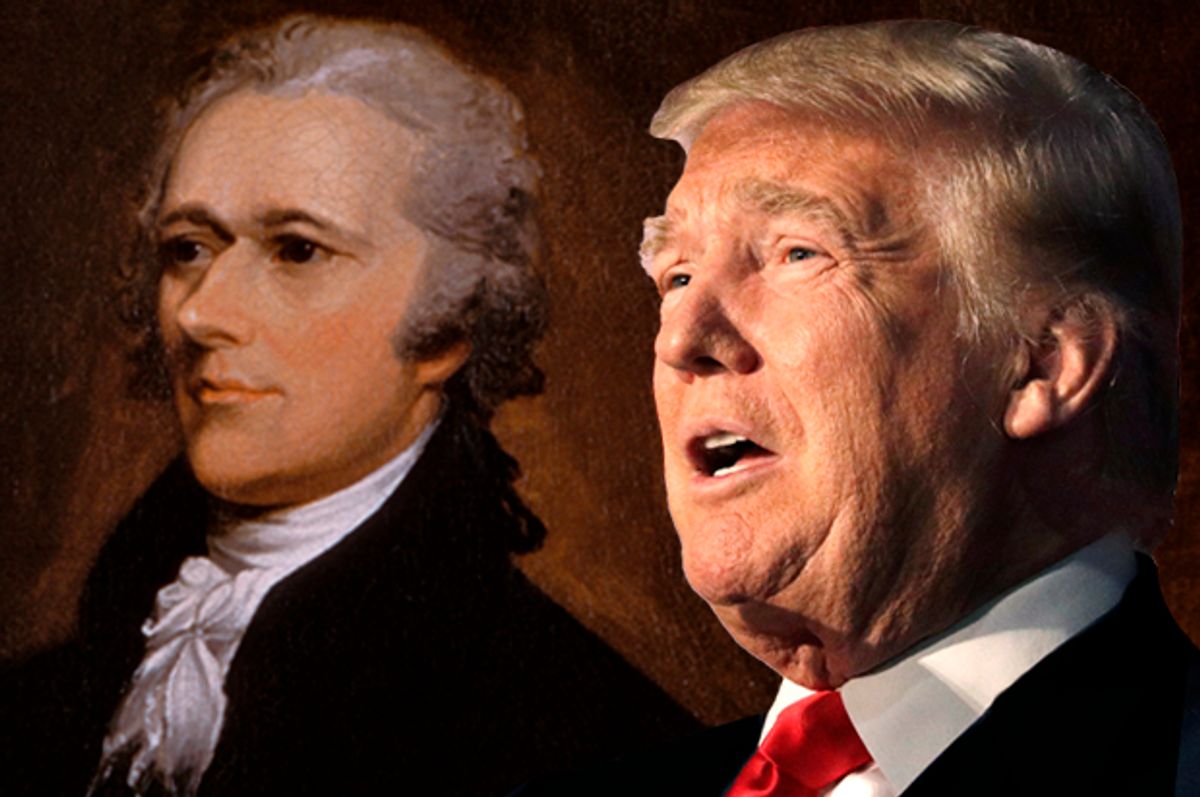 Millions of Americans are distraught at the prospect of Donald J. Trump’s occupation of the Oval Office. Many hope that on Monday, Dec. 19, the Electoral College will block his ascendancy. This is wishful thinking. Donald J. Trump will be sworn in as the 45th president on Jan. 20, 2017.

Fears of a Trump presidency are understandable. His behavior and cabinet choices reek with the stench of authoritarianism and oligarchy. But the Electoral College is not our safety valve. Yes, at least one Republican elector has announced he will not vote for Trump, and a handful of others have launched efforts to precede their vote with intelligence briefings about Russian influence in the election. None of this will stop at least 300 electors from choosing Trump.

Why not? The Constitution authorizes electors to make independent judgments. As Alexander Hamilton proclaimed in Federalist Paper No. 68, recently republished in these pages, electors would be “capable of analyzing” for themselves “the qualities” that were "essential to the presidency,” and “to possess the ... discernment requisite to such complicated investigations.” Hamilton said nothing about party loyalty. Electors would apply their own studious, careful and wise intellect to the choice, feeling obligated to nothing except their own conscience and sense of the public good.

But Hamilton’s imagined electors are not our electors; his explanation of the institution has no connection with our political reality, resembling that reality about as much as the three-fifths clause accords with our belief in “one person, one vote.” Most electors in 2016 will not act independently because by force of enduring habit and democratic tradition their role is exactly not to provide judgment. Their job is to ratify majority popular votes in their states. The majority of electors will do just that next Monday.

In short, the Electoral College bears almost no relation to its original intent, and that intent is murky. The Electoral College is in fact an apt example of how ill-designed arrangements survive by adapting to the pressures, force and power of stronger, more dynamic institutions. The Framers did not fashion our current system; the political parties did, although within the limits of the Framers’ design.

Our uniquely American way of choosing presidents has a peculiar history. But let’s first give the Framers their due. They attempted something entirely novel: to reconfigure what always had been an undemocratic institution into some kind of popular one. Until the late 18th century, executive power belonged to generations of warriors, chieftains, princes, Lords and kings, to martial strongmen – and occasional strong women too -- whose claims to power reflected muscle married to an assortment of self-serving mystical or religious myths. As James Madison pointedly observed, “War is the true nurse of executive aggrandizement.”

The Framers aimed to break with this tradition, by binding executive power to law and to a machinery of popular accountability.

Four times during a torrid Philadelphia summer, the Constitutional Convention voted tentatively to give Congress the power to choose the president. But skeptics raised questions: Some said this step would make for weak presidents; others wanted the people to make the decision, but critics complained that popular election would make the president too strong. Slave states, meanwhile, wanted to make sure their voice was heard especially loud and clear in the presidency. Feeling pressure to resolve tougher questions -- especially the big-state/small-state controversy and the question of slavery -- the delegates did what politicians do: They hesitated. Only after resolving the fiery issues of congressional representation, federalism and slavery -- late in August when the Framers were desperate to exit Philadelphia -- did they assign to a committee on unfinished matters the task of producing a consensus plan for presidential selection.

Eager to finish the job, the committee retrieved an idea offered back in June by Pennsylvania’s James Wilson: Let an intermediate body of electors choose the president. States could decide how to appoint them and their votes would be tallied according to the size of congressional delegations. And with the three-fifths clause in place, slave states had good reason to feel protected.

This plan was appealing enough to avoid heated debate. After all, most delegates understood that whatever rules they adopted, George Washington would get the first nod. Then, after Washington, support for presidential candidates would be so dispersed among the states that the House of Representatives would often make the final selection -- with each state delegation voting as a single unit, another huge victory for small and slave states. In other words, the Electoral College’s design reflected fatigue and state power more than the force of philosophical argument. Hamilton’s essay was an elegant after-the-fact rationale for what was an inelegant, inchoate and makeshift solution to a dilemma that continues to haunt us: how to marry democracy and the presidency. Americans looked to political parties for the answer.

Strong political pressures quickly turned the new institution to partisan purpose. As early as 1796, one Federalist politician announced that the electors’ job was “to act, not to think.” And lest there be any doubt, “to act,” meant a vote for the Federalist Party candidate, John Adams.

Early in the 19th century, the emergent Democratic and Whig parties effectively remade the Electoral College into a mere mechanical device to accumulate and legitimate popular majorities within the states. By 1860, every state but South Carolina chose its electors by popular vote for partisan candidates; the current winner-take-all system was a settled practice because it suited party interests. Hamilton’s ideal of civic responsibility was dead, its burial a tribute to the power of institutional adaptation over hasty design.

And so electors became the anonymous party faithful. Among well over 20,000 electoral votes cast since 1788, perhaps 150 could be counted as departures from party loyalty. We have become so accustomed to this tradition that we see “faithless electors” not as those who abandon their constitutional obligation, but as those who fail to rubber-stamp partisan state majorities.

In light of this history and practice, there is virtually no chance that 2016 will feature a revolt of the electors. Those opposing a President Trump will have to find other ways to press dissent and resistance.

As to the Electoral College itself, maybe the fact that twice in the last 16 years the loser of the popular vote became president will finally provoke a movement for direct popular election. In fact, a cruel irony of Hamilton’s argument might help to inspire such a movement. Among the greatest advantages of the Electoral College, he insisted, was that it would cripple the ability of “foreign powers to gain an improper ascendant in our councils ... by raising a creature of their own to the chief magistracy of the Union.” Hamilton could hardly have anticipated Russian hacking of our election, but he understood the dangers of international politics. The threat he identified was real, but the institution he praised will do nothing to thwart it. Only a stronger democracy can do that.