Is "liberal democracy" dead in the age of Brexit and Donald Trump? It depends what you mean

The election of Donald Trump was made possible by a collective loss of faith in democracy. But it's not too late 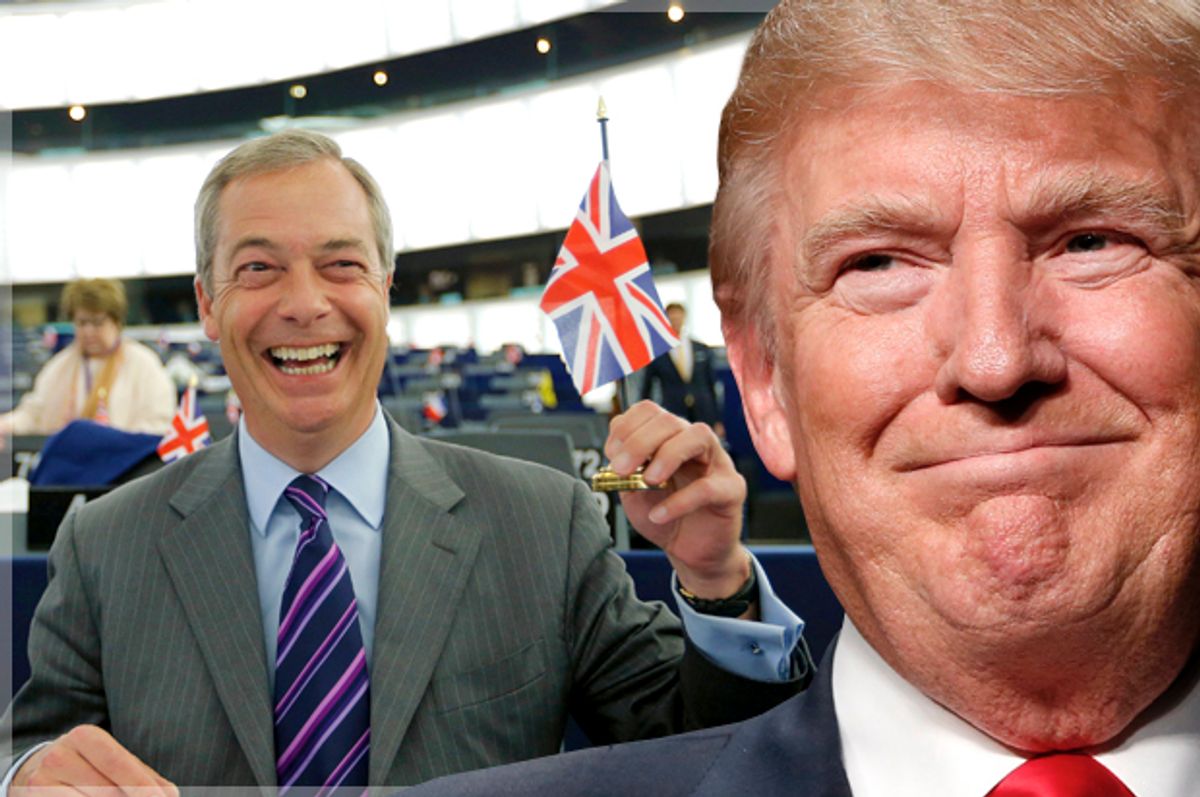 As the year of Trump and Brexit comes to a close, the general consensus among the liberal intelligentsia seems to be that democracy in America and around the world is in deep trouble.

And for good reason: Donald Trump is, as Ari Berman recently put it in the Nation, the “greatest threat to American democracy in our lifetime.” His lies about the prevalence of voter fraud are simply a “prelude to the massive voter suppression” that he and his Republican allies around the country will soon unleash. The president-elect, who promoted a conspiracy theory about widespread voter fraud last month (to prove that he had actually won the popular vote, which he is in fact losing by almost 2.7 million), has already put together an administration full of reactionary, anti-democratic zealots who won’t waste any time going after voting rights once in office.

As frightening as this is, it's just the tip of the iceberg. The post-communist era of stable Western democracies (i.e., liberal democracy) seems to be collapsing under the weight of its own contradictions, barely 25 years after certain political theorists were declaring the “end of history.” Far-right demagogues like Trump have risen across Europe by scapegoating immigrants and strongly opposing the European experiment, while the authoritarian government of Russia may very well have tipped America’s own presidential election. Illiberal populists are threatening the status quo — along with long-established civil rights and freedoms — while undemocratic elites in the establishment are resisting populism (on the left and right) by doubling down on neoliberalism, the ideology that provoked this anti-establishment revolt in the first place.

Last week, Trump’s former opponent, Hillary Clinton, singled out the proliferation of “fake news” and foreign propaganda as a particularly sinister threat. Although there has been some grossly inaccurate reporting on this subject — most notably a front-page article in the Washington Post, which cited a dubious organization falsely accusing various independent media outlets of publishing Russian propaganda — it is hard to disagree that disinformation is detrimental to the democratic process, whether it originates from Russia’s state-owned media, partisan hacks, Macedonian teenagers or the mainstream media. When voters do not have the facts and are regularly targeted with misinformation and propaganda — and when they lack the critical-thinking skills and media literacy required to determine what is legitimate and what is not — democracy is indeed in trouble.

The most alarming recent story reflecting the uncertain future of democracy, however, wasn’t about fake news or voter suppression, but about what appears to be the Western public’s cooling attitude toward democratic government itself. Late last month, the New York Times prompted widespread anxiety when it published a report that the “percentage of people who say it is ‘essential’ to live in a democracy” has plummeted across the Western world. This was based on the research of two scholars, including Harvard lecturer and Slate contributor Yascha Mounk.

That Times article included a rather shocking graph displaying what appeared to be a massive drop-off in support for democracy, particularly among those born after the 1970s. According to the graph, just over 25 percent of Americans born in the 1980s think it “essential” to live in democracy, compared to 75 percent of those born in the 1930s. Needless to say, it was a relief for many when critics pointed out the misleading nature of the graph. As Erik Voeten explained in the Washington Post:

The data for the graph are from the fifth wave of the World Values Survey (WVS), which asked people to place themselves on a 10-point scale where 1 meant that living in a democracy is "not at all important" and 10 "absolutely important." So where does this graph go wrong? It plots the percentage of people who answer 10, and it treats everyone else the same. The graph treats the people who place themselves at 1 as having the same commitment to democracy as those who answer 9. In reality, almost no one (less than 1 percent) said that democracy is "not at all important.”

So it simply isn't true that the majority of young Westerners have suddenly rejected democracy, and the Times article was more than a little alarmist. That doesn’t mean everything is fine — or that one shouldn’t be concerned. In a follow-up article, Voeten analyzed data from the European and World Values Surveys more extensively, and found that support for democracy among Americans under 35 has indeed declined slightly over the past decade, while support for both “army rule” and a “strong leader” have increased. (Although those levels are still minimal, any uptick in support for army rule is undeniably disturbing.) Furthermore, an October poll from SurveyMonkey found that roughly 40 percent of Americans have “lost faith” in U.S. democracy.

So is support for liberal democracy really starting to collapse in America and the West? If so, will the public even care enough to resist the anti-democratic agenda of Trump and the GOP, or other far-right populists yet to come?

Before attempting to answer these questions, it is worth making a few observations about our “liberal democracy” and the status quo that is currently being challenged. First, it should be evident to anybody who has taken a course in political science that the “democracy” that so many American citizens have lost faith in is not, in fact, much of a democracy at all. I am not making the trivial point that U.S. government is a “republic” by design — which is, after all, a form of democratic government — but simply pointing out that our “representatives” haven’t represented the people for quite some time. It should be equally apparent to any honest observer that both major parties have been complicit in the steady erosion of our democracy over the past several decades. Arguably the GOP has done far more to undermine our democracy — e.g., voter suppression, gerrymandering, undermining campaign finance laws, etc. — but that does not absolve the Democratic Party, which has also become addicted to big money.

My final point is admittedly contentious — so I’ll let Supreme Court Justice Louis Brandeis make it for me: “We may have democracy, or we may have wealth concentrated in the hands of a few, but we can't have both.”

Toward the end of Brandeis’ life, the American people chose democracy, and social democratic reforms were enacted to reduce extreme wealth inequality. Many of these reforms have since been eliminated or undermined, of course, and there have been some consistent and unsurprising trends in the U.S. over the past 40 years or so. Wealth and income disparities have returned to historic levels; middle-class wages have stagnated (even as worker productivity has climbed); the prison population has exploded; labor unions have been decimated; American consumerism has been sustained by cheap credit and debt; economic and political power have become increasingly concentrated; and — of course — Washington has been invaded by an army of corporate lobbyists and flooded with big money from Wall Street, corporate America and the billionaires’ club.

During that same period, the electorate has also become increasingly apathetic and divided by cultural issues, leading to what the late political scientist Sheldon Wolin called “civic demobilization.” Perhaps no one was more cognizant of America’s democratic decline than Wolin, who detailed it in his 2008 book “Democracy Incorporated: Managed Democracy and the Specter of Inverted Totalitarianism.”

Antidemocracy does not take the form of overt attacks upon the idea of government by the people. Instead, politically it means encouraging what I have earlier dubbed "civic demobilization," conditioning an electorate to being aroused for a brief spell, controlling its attention span, and then encouraging distraction or apathy. The intense pace of work and the extended working day, combined with job insecurity, is a formula for political demobilization, for privatizing the citizenry … Citizens are encouraged to distrust their government and politicians; to concentrate upon their own interests; to begrudge their taxes; and to exchange active involvement for symbolic gratifications of patriotism, collective self-righteousness, and military prowess.

Since Wolin wrote those words, American democracy has only grown more corrupt and dysfunctional, while the people have become more apathetic and distrustful — allowing extremist anti-democratic politics to flourish. It is doubtful that a reactionary demagogue like Trump could have succeeded in a healthy democracy where the political institutions and politicians were trusted by the people they are intended to serve. But the American people have largely lost faith in their government — and for good reason. The hidden hand of the market has led to an extreme concentration of wealth, and the not-so-hidden hand of our economic elite has led to a concentration of political power and the corruption of our democracy. Our “democratic” government has become completely dysfunctional and unresponsive to the people (as revealed by a 2014 Princeton University study) — and, like a skilled demagogue, Trump exploited this cynicism and eroding faith in our democratic institutions.

So, to answer the initial question of whether support for liberal democracy is collapsing … it’s complicated. In one sense, liberal democracy — that is, our current system, i.e., the status quo — is obviously losing public support. Trump wouldn’t have been able to win otherwise. This is extremely dangerous, and people should be very alarmed indeed. But there is a very important caveat: Liberal democracy in its current form is not at all democratic. Ask yourself how the public can be expected to have faith in a system where their representatives are forced to spend most of their day begging for political contributions from the wealthy, or where hyper-partisan gerrymandering has made most congressional seats uncompetitive, or where Wall Street lobbyists can literally write legislation? The real question isn’t Why are people cynical?, but How can one not be cynical?

Considering the fact that a self-described democratic socialist was the most popular presidential candidate among millennials this year, it seems profoundly misleading to suggest that young people are turning away from democracy. Instead, they are more likely turning away from a system that purports to be democratic but is, in reality, no such thing. If liberal democracy is to be defended against illiberal demagogues like Donald Trump — as it must be — then those on the political center and left must first start by fighting to restore the "democracy" to liberal democracy.