Living with Exploding Head Syndrome: This is what it feels like to hear gunshots in your mind

This bizarre sleep disorder is more common than I ever imagined 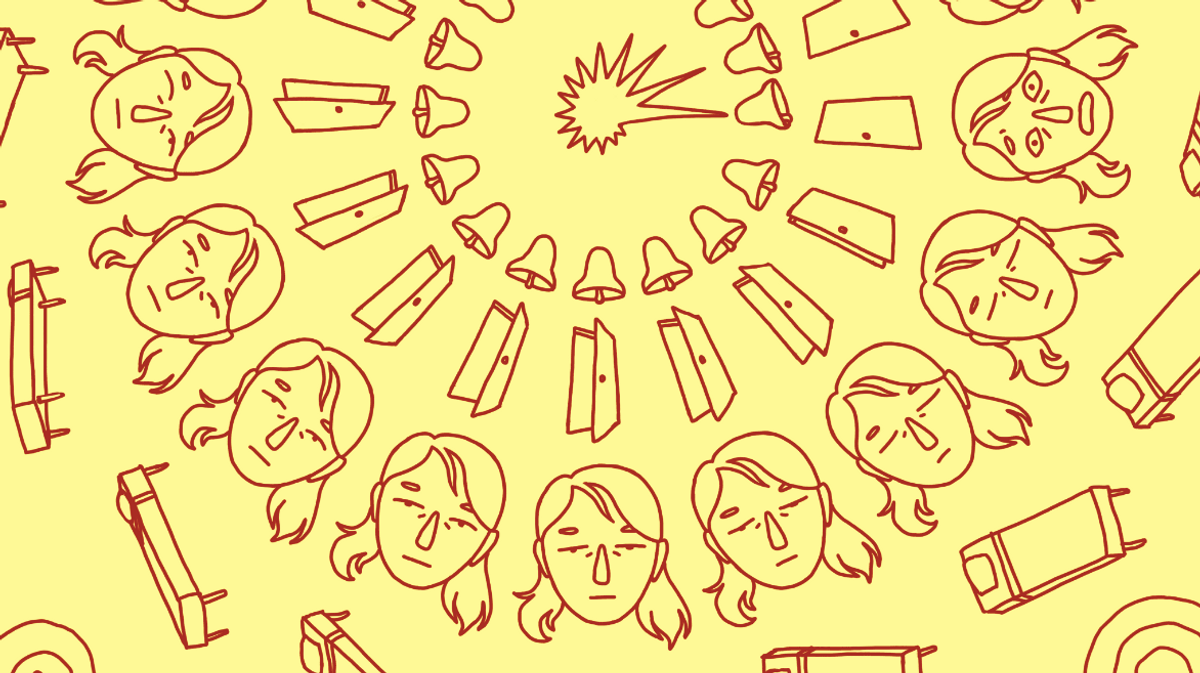 I fell into bed with my whole body aching. I had spent yet another day fretting — over a problem with a friend, family drama, wedding planning details — and felt like I hadn’t stopped tensing my neck for a minute. I plugged in my earbuds and opened the meditation app I’d been using to try to keep myself calm throughout the wedding planning process — my fiancé and I had been together for nine years, but that somehow didn’t make coordinating a meal and dance party for ninety guests any easier, especially from more than five hundred miles away. I’d been having trouble sleeping.

More from Narratively: "I had an emergency appendectomy in Egypt… so why do I still have my appendix?"

Most nights, thankfully, the meditation app helped me calm down enough to drift off while listening to it. That was the case this night, and I was grateful when I was able to turn off my phone and still feel myself fading. But just as I was about to be out, I heard a tremendously loud crack. My eyes flew open and I sat up in bed. It sounded like a gunshot, and my mind raced: I’ve never heard of gun crime in our neighborhood. I guess that doesn’t rule it out? But after a few seconds of panic, I realized I hadn’t really heard the sound. At least not in the typical way we hear sounds; the sound had come from inside my own head.

More from Narratively: "I started taking Zoloft five years ago. I haven’t felt sexual sensation since"

Naturally my next thought, once I realized this gunshot sound was not a gunshot, was to assume that it was an aneurysm, or a stroke, or some other as-yet-undiscovered malady in which the patient’s head slowly explodes in tiny shocking bursts from the inside. I’ve lived with a general buzz of anxiety for most of my life, and in times of stress my obsessive mind tends to focus on my health. A sampling of the things that have kept me up at night and helped fund my insurance provider over the past couple of years: heart palpitations, a lump in my breast, a funny-looking mole, a sore in my throat, visual migraines. In every case: a clean bill of health. In most cases: a prescription to cut down on stress.

Maybe because I was exhausted, or maybe because my daily meditation was starting to truly change my behavior, I resisted going to Google at first. Instead, after a few deep breaths, I tried again to drift off to sleep. And again, just as I felt myself melting from consciousness to unconsciousness, BAM!

“Fuck.” I said out loud. My fiancé turned over and mumbled something, blissfully asleep. I stayed up, at turns worrying and resigning myself to my fate, until sleep finally overcame me too — more quietly this time.

The next day I happened to have an appointment with my therapist. After thanking the universe that I woke up at all, I started trying to figure out how I would bring this up to her. I remembered all of the times doctors had asked me, as a teenager looking for help with anxiety, whether I heard voices in my head. The answer to that was and still is no — but was this the beginning of me going down that road? How could I explain what I had heard without sounding psychotic?

“It sounded like a gunshot … but … inside my head,” I said, biting my lip and waiting for my therapist’s eyes to widen. Instead, she looked as stoic as ever, and nodded.

“That happens to some people when they’re stressed,” she said.

“Really?” I didn’t believe her. She must not have understood what I had said. “A significant number of people hear gunshots while drifting off to sleep?”

Her explanation didn’t help me sleep much better. So, I made it my business to learn more on my own — beyond WebMD. As it turns out, the gunshot sounds — and now, as the selection of sounds has evolved with my stress, sometimes waves crashing, cymbals being hit or doors slamming — are part of a little-understood sleep disorder with a name fit for a patient prone to hyperbole: Exploding Head Syndrome.

EHS was first alluded to — though not with such a dramatic name — in 1876, when doctor and sleep researcher S. Weir Mitchell wrote in Virginia Medical Monthly about a variety of perplexing sleep disorders facing his patients. I came across Mitchell’s article while looking for mentions of “crashing sounds” in old medical writing about sleep disorders. His patients suffered from night terrors and what would later be called sleep paralysis, as well as sleepwalking and a variety of other possibly related symptoms and ailments. He described the symptoms of patients suffering from what would later be called EHS this way:

When just falling asleep, he became conscious of something like an aura passing up from his feet. When it reached his head, he felt what he described as an explosion. It was so violent and so loud, that he could not for a time satisfy himself that he was not hurt. The sensation was that of a pistol shot, or as of a bursting of something, followed by a momentary sense of deadly fear.

For some patients, the sound was more like a bell:

Mr. V. has rarely the sense of a pistol shot or a blow on the head. “I have,” he says, “at the close of the attack, a noise in my head, which is some-times like the sound of a bell, which has been struck once, and I have in my case listened as to a bell, to the vibration coming and going at rhythmical intervals, or else I hear a loud noise, which is most like that of a guitar string, rudely struck, and which breaks with a twang.

I found myself nodding enthusiastically while reading these descriptions, though my experience doesn’t include all of the physical sensations described above, or the “flashing lights” Mitchell writes about another patient experiencing. It felt good to know I wasn’t alone, but three glaring questions remained: what causes EHS, is it dangerous, and can it be cured?

Mitchell thought much of his patients’ discomfort was caused by alcohol and tobacco, and he was at a loss as to how to treat most of them, though the chemical compound bromide, often used as a sedative at the time, sometimes worked. He did share one other unorthodox treatment used by a mother who got frustrated with her child’s night terrors: she “lost her temper and made a sharp application of her slipper, with the result of once and for all breaking up the spells,” Mitchell wrote, adding: “I can hardly commend this therapeutic means!”

Sleep science has come a long way since Dr. Mitchell’s days, but still little is known about the causes of many sleep disorders, making it difficult to treat them (unless you’re comfortable with the slipper solution). In fact, many researchers believed much more recently than 1876 that EHS — first given its melodramatic name by J.M.S. Pearce in 1988 — might be caused by multiple small seizures, mainly in people over the age of fifty. And in some of the internet’s deepest circles of paranormal activity and conspiracy discussions (where Google searches about sleep disturbances inevitably lead), many self-proclaimed experts have their own explanations, ranging from communications from beyond the grave to microwave beam attacks.

Even I was skeptical about ghosts and microwave beams, and I wondered if much progress had been made on the science over the past 140 years. I only found one relatively recent study on the phenomenon, so I called the lead researcher. Brian Sharpless is an associate professor of clinical psychology at American School of Professional Psychology at Argosy University who studies psychological disorders, including isolated sleep paralysis. He was studying ISP — in which a person experiences temporary paralysis while falling asleep or waking up — when he came across the phenomenon of EHS and thought he would look into whether the two disorders are related. When I called him to talk about the study, he told me he interviewed about two hundred students at Washington State and was surprised by the findings, which he published last year in the Journal of Sleep Research.

“I found a much higher than expected prevalence rate [of EHS] — about 18 percent — and when I eliminated people with sleep paralysis, it went down to thirteen percent of the sample,” Sharpless said.

I asked him, hypothetically, if he thought stress might be the culprit. “I would guess it’s at least part of the puzzle,” he said.

It turns out that the most widely-accepted explanation for the rest of the puzzle is an issue with the reticular formation, the network of nerve pathways in the brain that connects it to the spine and controls consciousness. I thought that sounded pretty significant, but Sharpless, who dedicates a chapter to sleep disorders, including EHS, and their potential remedies in the new book he edited, "Unusual and Rare Psychological Disorders," told me health problems only arise when people become extremely upset about their sleep disturbances.

On the phone with Sharpless, I felt a strange mix of sheepishness and satisfaction. Once again, it looked like my anxiety was both cause and effect of my discomfort.

His words — and Mitchell’s — reminded me of so many things my own doctors have said to me that have proven true. Worrying about heart palpitations really does make them worse, for example. And any dense breast will feel dangerously lumpy if you’re looking for a dangerous lump. Maybe I — and those restless college students Sharpless studied — didn’t need to take bromide or submit to being whacked with a slipper. Maybe we just needed to chill.

New stressors are always on the horizon, though. A recent job and routine change had my body fighting sleep for weeks, my head crashing and banging as I tried to drift off at four a.m., night after night. This time, I tried to greet those sounds like the passing thoughts I have during meditation. I acknowledged them, and chose to focus on the silence around them instead. And when that didn’t work, I thought about Mitchell and the therapeutic slipper, and at least I could laugh.

Kaitlin Ugolik Phillips is the author of “The Future Of Feeling: Building Empathy in a Tech-Obsessed World”.