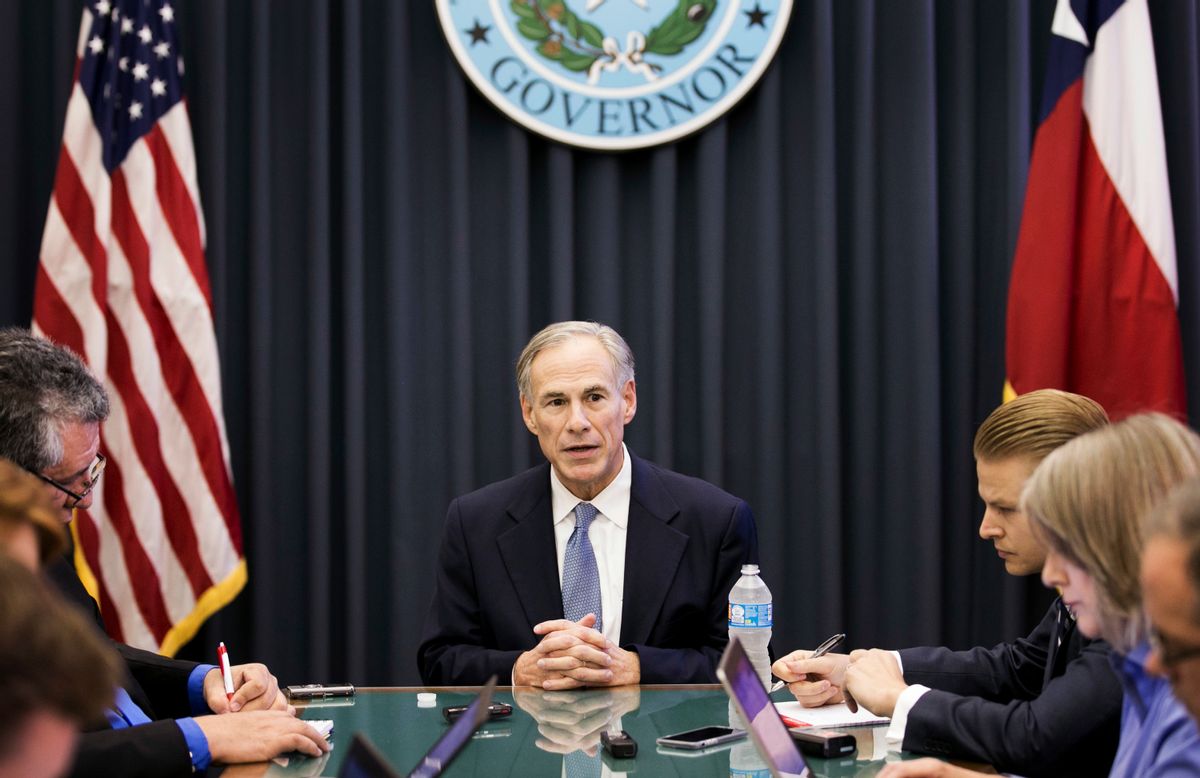 AUSTIN, Texas — Texas Gov. Greg Abbott has come in for some criticism since he responded to concerns about possible racial profiling along the border with Mexico by pointing to white drivers getting stopped in the state's wealthiest cities, prompting one police chief to say the governor's perceptions are wrong.

Abbott answered a question about racial profiling by saying that a closer look at Dallas' Highland Park or Houston's Memorial Village — predominantly white enclaves dotted with mansions of millionaires — would show that "most of the people who get pulled over there are Anglo." Not because they're white, Abbott said, but because of strict policing in those cities.

The Republican went on to say his "key point" was that "people want to live in and do business in places where there's law enforcement presence."

Abbott's remarks struck a nerve with a leading black Democratic lawmaker, Garnet Coleman, who has challenged state officials about whether Texas troopers have profiled drivers during an $800 million border security operation. Two police departments singled out by Abbott also disputed his characterizations.

Memorial Village Police Chief J.D. Sanders said Abbott is off base about who gets stopped and why. More than half of the 2,000 drivers his officers stopped in 2015 were minorities, and he said his officers wouldn't make a stop for barely exceeding the speed limit.

"Most of our residents abide by the law. So the people that usually don't are the people that are using a couple three, four streets that we've got as drive-thrus, and they typically are people that are domestically employed here. Landscapers, homemakers — I mean, housekeepers — and things like that. And they are not Anglos for the large part," Sanders said.

Highland Park police Lt. Lance Koppa also said their department wouldn't make stops for going slightly over the speed limit. A jump in traffic stops in border counties after Texas deployed additional troopers to the border has prompted allegations of state police harassing drivers, which state officials have denied. Terri Burke, executive director of the ACLU of Texas, said she suspects Abbott was being glib but also said drivers being pulled over near the border for minor infractions has been an ongoing problem.

The arrest last year of Sandra Bland, a black woman stopped outside Houston who later died in jail, and Texas deploying hundreds of additional troopers to the Mexican border, reignited concerns about drivers being profiled. The head of the Texas Department of Public Safety has forcefully denied those claims in sometimes testy exchanges with lawmakers.

The department has said it has received 40 racial profiling complaints since 2009, only one of which resulted in officer discipline. Lawmaker Coleman, whose district includes Houston, said Abbott was missing what he considers the real issue, which is what happens to drivers once they're stopped.

"It's either a naive answer or a deflection answer. Either one is bad," Coleman said.

Koppa said property crimes are the most usual offense in Highland Park, where unlike the Villages, the overwhelming majority of drivers stopped in 2015 were white. In another high-end neighborhood Abbott mentioned, Houston's Southside Place, whites made up 56 percent of motorist stops in 2015, according to a department report.

In Memorial Village, Sanders said identify theft and calls about suspicious vehicles occupy most of his time.

"Typically, what ends up happening is the people who are driving through here who are speeding and not obeying traffic laws here, tend to be higher in Hispanic and African-American than they are Anglo. That's just the way it is," Sanders said.