What "Rogue One" gets right: A "Star Wars" squad like no other can save more than the Rebellion

Will a stand-alone spin-off of "Star Wars" change our universe for women and people of color? No, but it's a start 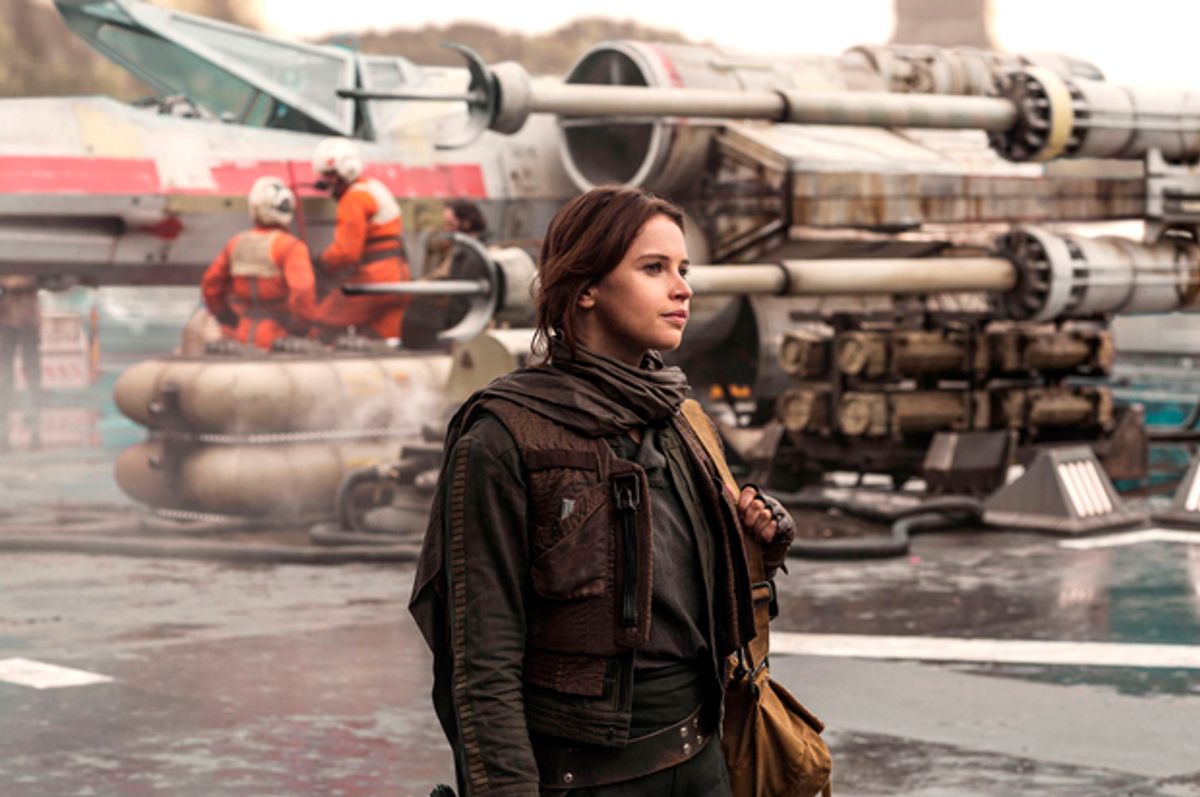 Let's dispense with the idiocy first — if ever there was proof that online “boycott” campaigns are seeded by bored trolls rather than fans, #DumpStarWars is it. "Feminist propaganda" and a subtweet directed at Donald Trump apparently aren't enough to deter hashtagging aggro-geeks from getting their first-chance Force on, because “Rogue One” just bagged the biggest box office Thursday opening of the year — what Variety describes as a “massive” $29 million — and is on course to earn $156 million this weekend alone, according to Deadline. Suffice to say the controversy, such as it was, hasn't touched it.

One year after Rey and Finn jumpstarted the franchise out of its prequel doldrums, we have the stand-alone spin-off “Rogue One,” a thoroughly kick-ass action film starring a young woman who spends precious little time on the family and personal drama that fuels the main “Star Wars” films and gets straight to the heart of the matter that surrounds all of that epic intergenerational angst — war. “Rogue One” is a tight story about the possibility of redemption in a time of unspeakable horrors. The film, which centers around the epic heist of the Death Star plans that leads to its destruction in “A New Hope,” asks if individual acts can alter the seemingly unstoppable march of totalitarianism, and if so, what sacrifices should individuals be willing to make to save their world?

An Imperial pilot defects, risking his life to deliver a save-the-universe message to the right hands. A scientist resists delivering a weapon of mass destruction into totalitarian hands until he is forced to comply, and then sabotages his supposedly indestructible masterpiece. A Rebel intelligence officer confronts the atrocities he has committed in the name of his cause. Resistance fighters give their lives. The film emphasizes bravery, self-sacrifice, and a personal reckoning with the cost of war, because no rebels come out of a conflict without blood on their hands as well.

In many ways, "Rogue One" is a standard action film — heavy on the plot, light on the personal development. But there are two things that the movie does that shouldn’t be rare and revolutionary in 2016, but nevertheless are. The first is that, building on the groundwork of "The Force Awakens," white-guy heroes don't save the day in this “Star Wars Story.” (I have nothing particularly against white-guy heroes, but they have been the default for so long at the expense of non-white guy actors that movies like "Rogue One" feel refreshing even when they are treading very familiar action-film ground.) When the dastardly Krennic (the delightful Ben Mendelsohn) tracks down Galen Erso (Mads Mikkelsen), an Imperial scientist in hiding, to conscript him back into service to design the Death Star, it’s Galen’s wife (Valene Kane) who dies defending the family. Galen later redeems himself, but after completing a weapon that is used to destroy entire cities, bases and even planets.

Their little girl grows up to be Jyn (Felicity Jones), raised and trained by extremist fighter and family friend Saw Gererra (Forest Whitaker) before he abandons her to a life of petty crime. When Jyn joins up with the ragtag bunch of misfit fighters to pull off their big Rebel mission, it is a multicultural band of brothers going into battle with her — Cassian (Diego Luna), Bodhi (Riz Ahmed), Chirrut Imwe (Donnie Yen) and Baze Malbus (Wen Jiang) — in an ultimate symbolic rejection of the white supremacist tyranny of the Empire. (The charming wisecracker on this mission isn’t even a handsome white guy, he’s a robot liberated from his original Imperial code.) Even the Rebels' stalwart air battle commanders are, like Admiral Ackbar of “It’s a trap!” fame, Mon Calamari. (Yes, really.)

We do not learn the tender histories of the brave and skilled members of the rest of the squad — why give the material away before all “Rogue One” prequel options have been exhausted? — but neither are they presented as dull or one-dimensional. They are fighting to save their homes, their people and their traditions from being crushed by the Empire. Each is presumed to have a rich backstory, and the film’s decent if economical dialog and very talented cast conveys that at every turn.

And yet “Rogue One” doesn’t turn the diversity of the squad into a heavy-handed lesson, either — they just do their action hero squad thing, and they do it well and with style. As “Silicon Valley” star Kumail Nanjiani said on Twitter, noting that he teared up realizing that people who “looked like me” were good guys, “For the 1st time I really felt the importance of representation. I felt like a kid watching this movie. I felt like I could do anything.” In a landscape in which the lines of all of the characters of color in one film can often be condensed down to less than two minutes of screen time — see Dylan Marron’s devastating edits — this level of matter-of-fact representation is no small feat.

Here's the second thing “Rogue One” did that shouldn’t feel subversive in 2016 but does: Jyn is one of the film's heroes, but she's not a heroine. Yes, she’s unmistakably a young woman, but if the character of Jyn had been cast with a man or a non-binary performer, it would make no appreciable difference to the film’s story.

This is a departure even from the fairly-woke (and quite excellent) “The Force Awakens,” where former Stormtrooper Finn is constantly trying to “rescue” Rey, presumably because girls need rescuing. While “The Force Awakens” subverts his fumbling attempts with Rey’s self-taught skills and innate power, the dynamic still serves to remind viewers that Rey is a female badass, so isn't it surprising that she can hold her own? And no matter how much the Internet would love for Finn to romance Oscar Isaacs’ dashing pilot Poe Dameron, Finn clearly has feelings for Rey. Jyn and Cassian, on the other hand, have neither the time nor the energy to indulge the sparks that would ordinarily fly from two attractive film characters who disagree passionately. There is no Han and Leia heat here; the Death Star is fully operational. “Rogue One” has no time for kissy-face.

Because there’s nothing particularly gendered about Jyn’s role in the events of “Rogue One,” her character never gets the backwards-in-heels treatment — or the chained-up-and-in-a-metal-bikini treatment, to use the “Star Wars” universe vocabulary. She's pretty much like every other action hero out there — a little haunted, a lot badass — and the movie focuses mostly on her decisions and actions, not her feelings. Jyn doesn't have to be an exceptional woman overcoming the hurdles that being a woman has placed in her way — she just has to work with her team on one complicated, dangerous mission that she may not survive, because it's the only right thing to do.  "Rogue One" might be the ultimate escapist fantasy for girls and women: Imagine a world in which your abilities and your courage are the only things you will ever be noticed — or punished — for.

And, arguably just as important, because there's nothing particularly gendered about Jyn's role in the film, there is nothing to suggest to the little boys watching — who may well grow up to be adult men who want to argue about “Star Wars” minutiae on the Internet — that there’s any difference between playing Cassian or Jyn when they break out the action figures. They can argue on character merits the way my brother and I would over who would play Luke and who would be Han back in the ’80s (whiny Jedi vs. cool civilian) instead. "Rogue One" could have given Jyn's squad a few more women from diverse backgrounds for the kids to choose from, though. That would have been even cooler.

Better representation for women and people of color in one fast-paced action movie, even in a franchise as influential as "Star Wars," isn't going to change the world overnight. But Disney CEO Bob Iger can claim that there are no political statements in "Rogue One" until he's blue in the face — there is a powerful political statement being made in this film. In 20 years, the cultural arguments on whatever dystopian platform will host our canonical quibbles will sound much different from today's, and "Rogue One" will have helped.