What they did in the shadows: President Putin and President Trump, and what we know about what we don't know

It's a shocking real-life spy story, but what really happened — and what it means — may not be clear for decades 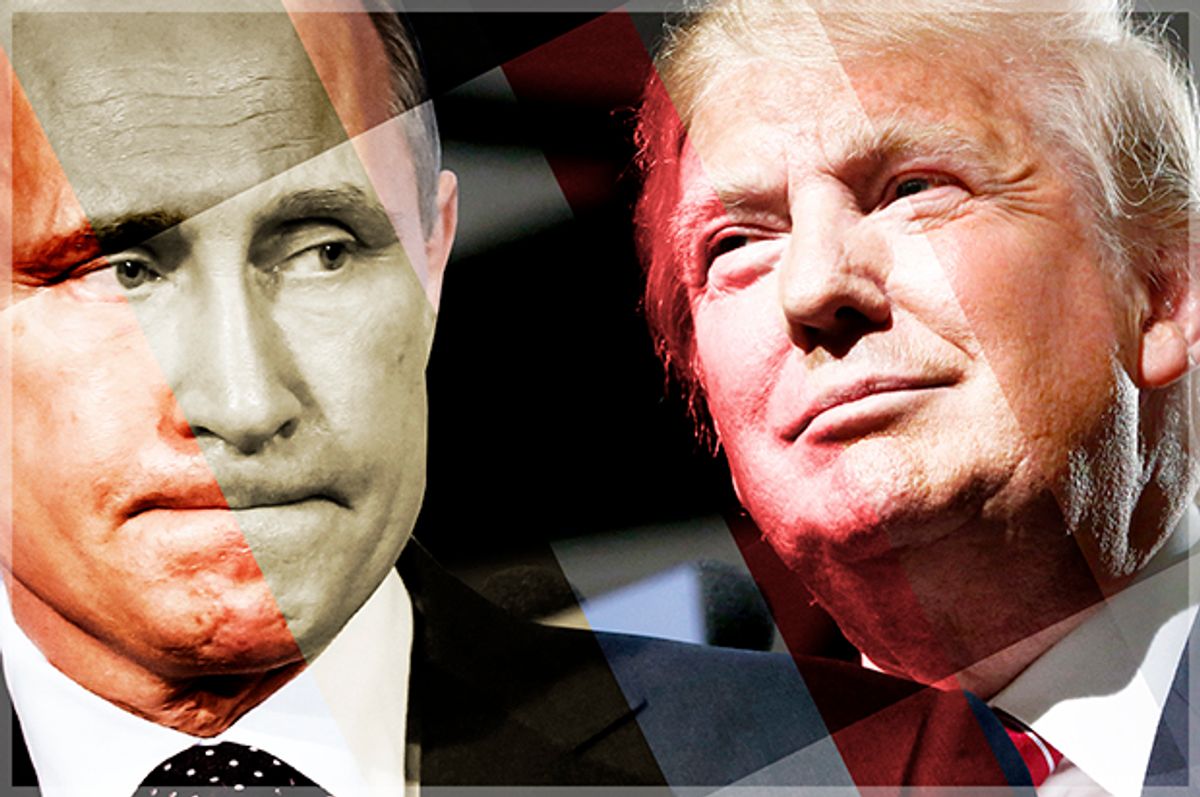 At the end of a year in American political life that has come to seem increasingly fictional — a John le Carré spy novel, set in a Philip K. Dick alternate universe — we have reached what is surely the final plot twist. Large numbers of Americans this weekend are trying to pretend that the Electoral College is something other than a vestigial organ left behind by a failed 18th-century compromise, and that the highfalutin language written about it by Alexander Hamilton in Federalist Paper No. 68 (as an ex post facto justification) actually means something.

It’s a pathetic but understandable denouement, given the unbelievable scenario we now confront: an incoming president, viewed by most of his fellow citizens as spectacularly unqualified for office, elected by a minority of voters in a massive fluke apparently engineered by a foreign despot. It’s exactly the situation Hamilton said he wanted to avoid in creating the Electoral College in the first place, an august and neutral body of men “acting under circumstances favorable to deliberation” and “opposed to cabal, intrigue, and corruption.”

Of course, the Electoral College has never played anything close to that role in its entire history, and as early as the third presidential election in 1796 it had become a rubber-stamp mechanism of party politics. An impressive level of desperation and imagination is at work in hoping that an anachronistic institution of democracy, which has never functioned as intended, can save democracy now. It’s like rushing to close the barn door after the horses have fled, lived out their lives and sired progeny and died, and the barn has fallen down.

If the Electoral College cannot save democracy, it’s equally true that Vladimir Putin cannot destroy it. One of them is irrelevant and the other — well, definitely isn’t, but may be something of a distraction. The damage to democracy has already been done, and the rot has been spreading for years. We wouldn’t be pleading for special favors from the gods or pointing fingers at overseas dictators if that damage were not significant.

So instead of launching a constitutional crisis (and perhaps starting a second civil war), the electors will play their appointed role on Monday and certify Donald J. Trump as president of the United States. The rest of us will be left to wonder exactly how this happened. We may be wondering a long time. What we now know, or think we know, about the alleged or apparent Russian attempts to hack our political system and undermine the integrity of the 2016 presidential election is dwarfed by what we don’t know, and what we may never know.

One sentence in the 7,000-word New York Times investigative article on the Russian hacking operation published last week jumped out at me in particular. It follows a paragraph in which the reporters speculate about the nature of “human and technical resources” inside Russia that apparently confirmed details about the hack: “But that may not be known for decades, until the secrets are declassified.” In other words, we don’t even know what we don’t know, nor do we know the reasons why we don’t know it.

I’m not trying to play ultra-left cynic or downplay the gravity of this crisis by observing that the entire situation remains murky, and surrounded by questions that have no obvious answers. I think it’s a critical mistake, at this juncture in American history, to assume that the semi-convincing revelations about the Russian hack actually explain anything or, worse still, that we now know what happened and why. It seems clear, at least, that American intelligence officials now believe that the Russian government or its proxies deliberately tried to subvert the political process with the goal of electing Trump and defeating Hillary Clinton. We haven’t seen any hard evidence and aren’t likely to, but none of that rules out the possibility that other parties were involved, or that there are other layers to the onion that we can’t see. (As for the Donald Trump hypothesis that the CIA is totally full of crap, or the left-wing theory that the intelligence agencies have constructed an elaborate smoke screen to conceal their own misdeeds, I guess we can’t rule those out either.)

As you may have noticed, Trump won and Clinton lost, which is terrifying and bizarre all by itself — but whether we can draw a line of cause and effect from President Putin to President Trump is unclear and ultimately unknowable. It’s probably fair to say that in any election this close, every marginal factor made a difference: Republican voter-suppression tactics, the fateful James Comey letter, the presence of Jill Stein and Gary Johnson on the ballot in certain states, and the havoc wrought within the Democratic Party by the hacks and leaks presumably engineered by Putin. Subtract any of those factors, and the result would likely have been different.

But the problem here is what we might call the “Ralph Nader complex”: Those who want to argue that American democracy is perfectly OK and the Democratic Party is perfectly OK, for example, can cherry-pick whichever marginal factors they prefer. If the only reason Hillary Clinton lost the election to a moronic demagogue and professed sexual predator was because of Russian sabotage, then there’s no reason not to keep on running candidates like her into the indefinite future.

We also don’t know anything about the degree of collusion, if any, between the principal characters in this farcical spy novel. I have spent much of the year resisting grand conspiracy theories about a Halloween alliance between Trump, Putin and Julian Assange of WikiLeaks, for instance. It’s time to admit in all humility that such theories sound a lot less implausible now than they did a few weeks ago. It may be years before we learn what signals were sent and by whom, and what role Assange played in the larger scheme. It’s possible, for instance, that Assange is telling the truth when he says he didn’t get the Democratic Party emails from the Russians; other intermediaries could have been involved.

But the problem with grand theories that explain everything is precisely that they explain too much. As I observed in a far more lighthearted article just before the election, Putin and Trump’s secret plan to destroy democracy wasn’t much of a secret, and they didn’t have to hold a meeting in a Zurich bank vault to figure out that they were kindred spirits with interests in common. One of the responsibilities that comes with a public platform is ’fessing up when you get things wrong, and we’ve all gotten plenty of practice at that in 2016. When I look back at what I wrote about the Putin-Trump allegations during the campaign, it’s not so much that my analysis was wrong as that, like many observers on the left, I failed to perceive the enormous disruptive influence and historical importance of the hack itself.

I also failed to understand the true import of my own arguments. When I wrote that Putin was the true winner of the 2016 election, and that he had “exercised a Voldemort-like level of control over this whole process,” I basically thought I was kidding, or engaging in hyperbole. If the Russian president’s backstage machinations had played a role in making America look like a banana republic, I wrote, “he couldn’t have done it if we hadn’t planted the banana groves ourselves.” That’s all still true, but with a new resonance I didn’t see coming.

If Putin meddled in our presidential election with a specific goal in mind and accomplished it — and, oh, what a goal it was! — it will be remembered as a profoundly shocking event and something of a historical turning point. It may, in the long run, have a salutary effect, if it convinces us to break free of our sclerotic and dysfunctional politics and rebuild our democratic institutions. That’s an enormous if, and one that may take decades to become reality.

Similarly, despite all the hand-wringing over whether the American media served as unwitting tools of the Kremlin by publishing the leaked emails, the leaks themselves were not entirely a bad thing. They opened a window onto the inner workings of our political culture and admitted some sunlight.

For Salon, the question of whether to publish material that illuminated the Democratic Party’s overly cozy relationship with the Clinton campaign was never a question at all, given our readers' intense interest (and that of our writers and editors) in the contest between Clinton and Bernie Sanders. I don't think any of us deluded ourselves about the likely source of that material, or assumed that the motivations behind the leak were noble. There are definitely cases when journalists should not publish things that are already in the public domain, especially when it's private or personal and could put someone in danger. Donna Brazile and John Podesta’s emails in their roles as party officials, to my mind, don’t come near that standard.

Undeniably, the whole saga looks different in retrospect, on the eve of Trump’s official coronation. I suppose it’s fitting that we are all left to wonder what we might have done differently, and whether it would have changed anything. Someday we may hope to understand the impossible but true story of Donald Trump and Vladimir Putin and the most massively screwed-up presidential election in our history better than we do now (which is virtually not at all). But it might be fatal hubris to assume that we know the moral of the story before we know what actually happened — and whether we will ever know that is the biggest unknown of all.