"The incoming VP now works for a pro-gay boss": Gay Republicans say LGBT fears over Trump and Pence are overblown 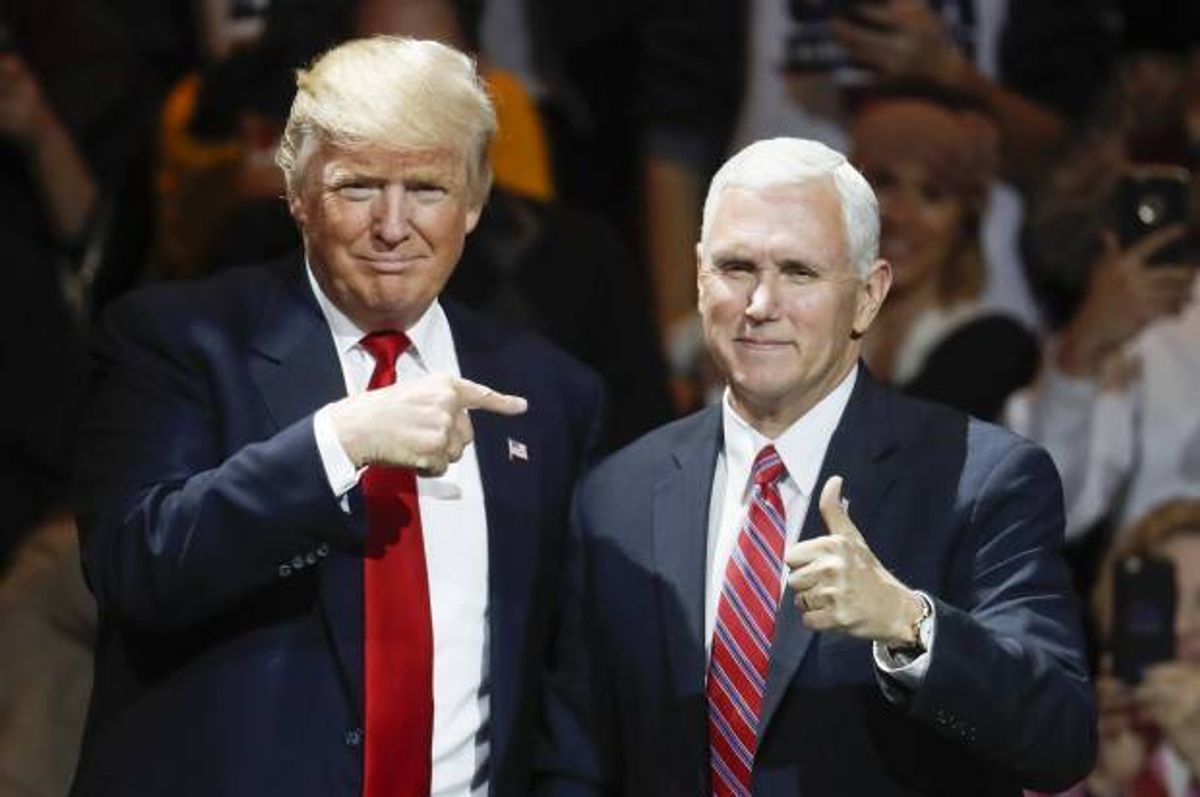 Many LGBT activists are expressing fear and anxiety about gay rights under the Trump administration, worried that long-fought progress would be rolled back by traditional conservatives. Yet gay Republicans and their allies say these fears appear to be overblown.

“The one area of civil rights where Trump was a pioneer was gay rights,” said Rich Tafel, who founded the Log Cabin Republicans in 1993. “He has clearly had gay friends and mentors in his life and he simply doesn't see it as an issue. Mitt Romney, who was gay supportive when I met with him in his 1996 race, shifted gears when he ran for president."

Tafel says it would have been easy for Trump to do the same. Instead, he pointed out, Trump mentioned LGBT rights in his acceptance speech at the Republican National Convention in Cleveland, and thanked attendees who applauded for supporting his statement.

"In addition, he had the first openly gay speaker to acknowledge he's gay [PayPal founder Peter Thiel] speak moments before his acceptance speech. That's pretty radical considering the hall was anti-gay," said Tafel. "Later on his campaign tour, he waved a gay flag from the podium. When he did his first interview after the election on 60 Minutes, he refused to take the bait on being anti-gay marriage. Being pro-gay seems to be one thing he holds as a core principle.”

Tafel and other LGBT activists interviewed by Salon said they’re relieved that Thiel, an openly gay tech titan, is playing a key role on the Trump transition team.

“Trump’s inclusion of Peter Thiel in the Cleveland convention primetime lineup affirms Donald Trump’s intention to govern as he ran his business empire,” said Eddie Mehnert, a GOP consultant and grassroots activist in Ft. Lauderdale, Florida. “Trump’s Mar-a-Lago Club, unlike most of the other private clubs in Palm Beach, accepted openly gay members while the other clubs instituted a 'don't ask don't tell' policy, effectively forcing their gay members to conceal their orientation."

"I believe that most fears are totally overblown," Mehnert added. "I believe Trump truly intents to bring prosperity to all Americans, including the gay community, and [I] believe him when he said marriage was settled law and different from Roe vs Wade, which [he said in an interview] he believed was not correctly decided. He believed the states should decide for themselves on the life issue.”

Mehnert pointed to Trump’s speech in the wake of the tragic shooting at Pulse nightclub, a gay club in Orlando, as a clear expression of Trump’s support for the LGBT community.

“I am not worried that he will repeal any advances on GLBT issues during the Obama administration,” said Mehnert, who was undeterred by the Republican National Committee rejecting lesbian delegate Rachel Hoff's quest to insert support for gay rights in the official party platform. “The platform is utterly meaningless. And while the platform is shameful, [neither] the president nor the Congress are bound to uphold and enforce it. The extremist members of both parties always try to get on the platform committees to achieve meaningless victories symbolic to them.”

Tafel agreed that the GOP platform "is best ignored."

“That small committee is run by a group who live every four years to put their pet issues into the platform," he said. "Every candidate and president ignored what's in it. I felt it was a mistake to make it a bigger issue because that's what those anti-gay activists wanted.”

Some LGBT activists have been concerned about the possible support of Vice President-elect Mike Pence's support for so-called "conversion therapy.”

“I think we have to be very careful what we charge Pence with,” Tafel said. “I know that Politifact first said it was true and then changed their coverage to say it is not true that he said this." (Politifact has revised their fact-check assessment to "half-true.")

That's not to say that Tafel views Pence as an ally on LGBT issues.

"My overall sense of Governor Pence is that he is certainly not gay supportive," said Tafel. "What he exactly believes on reparative therapy is a great question and a journalist should ask it. The incoming VP now works for a pro-gay boss. This will have the greatest impact on him. Also, he almost lost his political career for an anti-gay move on religious freedom in his state."

Tafel pointed out that North Carolina Governor Pat McCrory lost his reelection bid after backing similar anti-LGBT laws. "It's a loser issue and Pence likely sees that,” he said.

Tafel said his bigger concern isn’t Pence but the the sheer number of evangelicals who are anti-gay who supported Trump.

“What do they get? What do they want?” he said. "Evangelicals know they supported the most pro-gay Republican candidate in American history. The question is do they challenge him or simply move on? I expect they'll focus on abortion.”

Former New Jersey Gov. Christine Todd Whitman, who is heterosexual but a vocal supporter of gay rights throughout her career, also said she thinks abortion and Planned Parenthood funding are at greater risk under a Trump administration than LGBT rights.

“I think it’s an overblown fear,” Todd Whitman said in a Salon Talks interview. “I worry about women’s rights.”

Peter Hopkins is a gay New Yorker who is a registered Republican and self-identified “liberaltarian” who leans left on social issues and libertarian on fiscal issues. He’s president and co-founder of Big Think, a media company whose investors include Thiel. Hopkins is also buoyed by Thiel’s presence in the Trump transition team.

“I do think with respect to [Trump's] Supreme Court appointments, that’s really where the devil will lie in the details,” Hopkins said. “If he pursues Supreme Court nominees, all of whom track against the Scalia model and feel strongly that, whether it’s Roe v Wade or Obergefell [v. Hodges], that they have overstepped judicial prerogative in terms of their interpretation of the constitution, that’s really going to be a problem.”

But Hopkins said, on balance he’s not worried about Pence or other evangelicals who may be surrounding Trump as the president-elect has clearly shown himself to be an independent operator who has a clear personal record of supporting LGBT rights.

“There’s a lot of failure to reasonably disassociate the hyperbole of campaign rhetoric from the augmentation of policy and the presentation of policy, both in terms of its legislative form and secondarily through appointments to positions like the [Supreme Court],” he said. “The net of that in my mind is we must take a wait and see approach. I think the biggest problem we have right now is there’s a lot of jumping to conclusions.”