I teach at two universities, and my students don't resemble the coddled, safe space-seeking media caricature at all 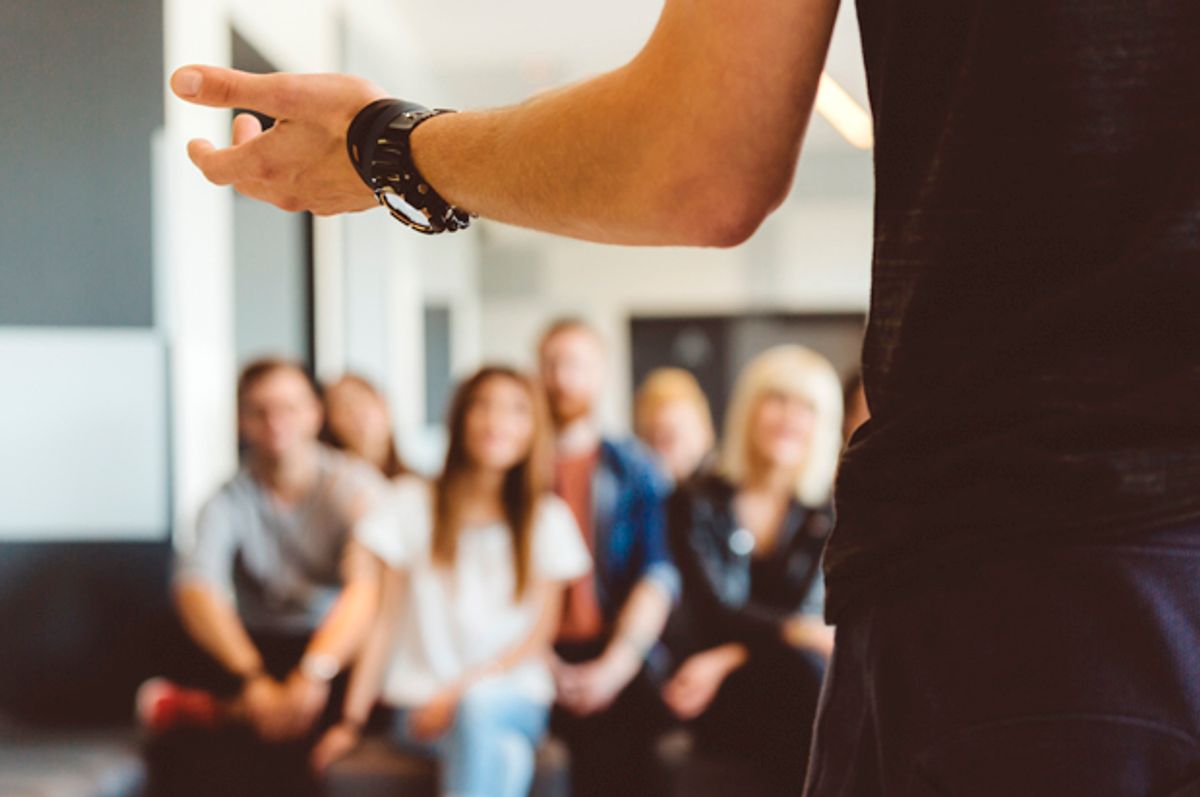 The end of the semester is always grueling for those of us who ply our trade teaching. I wouldn’t compare it to working in a coal mine, but as the papers, exams, and correspondences from students suffocate the instructor, the holiday break promises not only leisure, but oxygen. It is also a time that I can consider how my students are consistently responsible for the enrichment of my life; inspiring me to not only become a better teacher, but a better man.

I teach literature and writing at two universities, and just this semester I had one student who soldiered through her final coursework while celebrating an engagement and dealing with her alcoholic mother. Another student grieved the loss of her older sister to cancer. To meet the requirements of a personal essay assignment, one of my students wrote about when he and his mother lost their home in Hurricane Katrina, and of the challenge of moving from New Orleans to Northern Indiana to live with his aunt. Last semester, I learned of the ongoing struggle one of my students, Angelo, endured with a rare form of cancer he had since early childhood. The cancer returned at the midway point in our course, but even while dealing with the poison of chemotherapy and the emotional exhaustion of confronting a killer inside his own body, he managed to turn in all of his work. He and his parents started a local charity to raise money to assist children with cancer. Angelo died this month.

Not long ago, when I first began teaching, I had one student who lost both parents from different causes of death during the same summer, just weeks before classes commenced. Among my students who are impossible to forget, there was a young woman whose work inexplicably declined with only a month left before final exams. When I questioned her abrupt plunge in academic performance, she broke down. She kept apologizing for crying while she explained that she and her daughter had lived the previous few weeks in a homeless shelter. She is now a nurse and homeowner.

These are just a few of the delicate “snowflakes” I have met and taught.

In the first season of "Mad Men," Roger Sterling, played by John Slattery, tells Don Draper, “In Biblical times, there were probably people walking around complaining about ‘kids today.’”

There are few activities more predictable and pathetic than old people lamenting the loss of virtue, the weakness or the incompetence of young people. Just as every generation prepares to hand the keys over to the next, its more bitter and resentful members demonstrate the apocalyptic apoplexy of self-centered illusion. The “kids today” will destroy the world, the fossilizing commentator insists, because they aren’t like us. Any sign of difference in social norms among a younger generation is not innocuous change, and it is surely not evidence of growth. It is reason for alarm. How dare anyone behave not exactly like we did?

It turns out that Elvis Presley and rock ‘n’ roll did not usher in the age of Armageddon, easily accessible birth control has not reduced civilization to a heap of ashes, women in the workplace have not caused the collapse of the nation’s economic institutions and the assimilation of same sex couples into mainstream culture has not transformed the United States into a contemporary incarnation of Sodom and Gomorrah.

Almost all of the anxiety over the social progress of the baby boomer generation was without justification, making it all the more ironic that it is currently the boomers directing hysterical sanctimony at millennials. The accusations and condescension that many boomers hurl at younger Americans have all the charm and appeal of projectile vomiting.

Millennials, according to everyone from the Sunday school teachers at Fox News to Jonathan Chait, are overly sensitive “snowflakes,” who cannot handle the most trivial inconvenience without suffering a nervous breakdown. They are also politically correct “social justice warriors,” who require “trigger warnings” and “safe spaces” to get through the typical college semester. The palpable delight that many boomers display when they ridicule millennials calls into question how they feel about their own children, but it also indicates that they long ago filed for divorce from the truth. Because the dopamine rush of mocking young people is so irresistible, no one bothers to actually investigate the veracity of the charges against the so called “snowflake generation.”

Since I started teaching at the college level six years ago, I have not once experienced a student protesting my syllabus, asking for censorship of assigned course material, or requesting that I provide a trigger warning before discussing potentially controversial or emotional material. It turns out that my experience is not anomalous, but entirely ordinary. In the spring of 2015, the National Coalition Against Censorship partnered with the Modern Language Association to survey 800 college professors from hundreds of different four year universities. Only a handful said that their university mandated the use of “trigger warnings,” and only 34 percent said that they had ever “warned” students about the content of textual or visual material in the course. In most cases, the warnings were for graphic sexual or violent content, which seems like an exercise in politeness more than totalitarian oppression. 85 percent of the professors said that no student had ever requested a trigger warning, or asked about trigger warnings. It would appear that the only people too fragile to handle communication counter to their own assumptions are the right wing paranoiacs shrieking and cowering over the barely visible minority of college students actively involved in progressive political activism.

Certain segments of the political media might present the average campus as the site of an endless riot, but The Cooperative Institutional Research Program at UCLA recently polled 141,000 college students, and found that only 9 percent of them expressed interest in even attending a campus protest. Petitions like the one circulated by Oberlin College students requesting a "no-fail mercy period" for protestors are going to be very rare given that in the 2014-15 academic year, a mere 6.4 percent of American universities had a demonstration take place on campus.

One of the secrets rendering much of political punditry irrelevant is that most human beings are not ideological. The pursuit of happiness, the desire for belonging and the pleasure principle are far more powerful motivators, with all but a few extremists on right and left, than any system of political belief. “Opiners,” to use a wonderful vocabulary selection for George W. Bush, fixate on the extreme adherents to ideology, because they are easiest for them to understand and analyze. It is harder to write about the large masses of people who pay little attention to politics, and simply conduct quiet lives of personal purpose.

The overwhelming majority of college students are not threatening to burn down administrative buildings or staging sit-ins over “cultural appropriation.” They are trying to earn a degree that will help them matriculate into a career of their choice. In the meantime, they want to make friends, have fun and get laid. Anyone who has spent time teaching in the college classroom would relate to my testimony that the biggest problem of political participation among American youth is that it does not exist. Too many college students are apathetic — not only about politics, but about the arts, and history and culture in general. An observer with any sense would expect most young people to live with self-directed focus. Their lives are in a stage of development and excitement. They are more interested their own surroundings than anything that takes place in Washington, D.C. At worst, they are myopic, but they are not weak.

Certainly, not all of my students are inspirational cancer patients, or single mothers who fight their way out of homelessness and into home ownership, and without a doubt, there are always a handful of students during any given semester who function as living irritants — obsessively checking their phones during class, refusing to read assigned material, sending me emails with questions so inane I wonder if they are aspiring satirists — but most are hopeful to lay the foundation for the rest of their lives. They maintain an optimistic attitude even as they confront the inevitable traumas of survival, and they carry the unique burden of obscene student debt.

One day, just after spring break, Angelo asked me if we could speak outside. Without much emotion, but inescapable sadness in his eyes, he explained that his cancer was back. I offered my sympathy, and tried and failed to say something — anything — of substance and meaning. Then, I assured him that I could give him an incomplete in the course, allowing him adequate time to recover his health, and finish his work. “No, I will continue to come to class, and turn the papers in on time,” he said without hesitation. He didn’t miss one assignment. More importantly, he continued to organize fundraisers to provide some small relief for children with cancer. Perhaps, he believed that the only purpose he could find in his own suffering was to alleviate the suffering of others.

As I gather strength from the quiet resolve most of my students demonstrate, and as I do my best to honor and advance Angelo’s effortless example of courage and compassion, I get the idea that they are stronger, and better for our country, than most of the insufferable scolds who enjoy insulting them.