Take your buddies hunting with Eric and Don Jr. for just a million bucks! "Net proceeds" will go to a good cause! 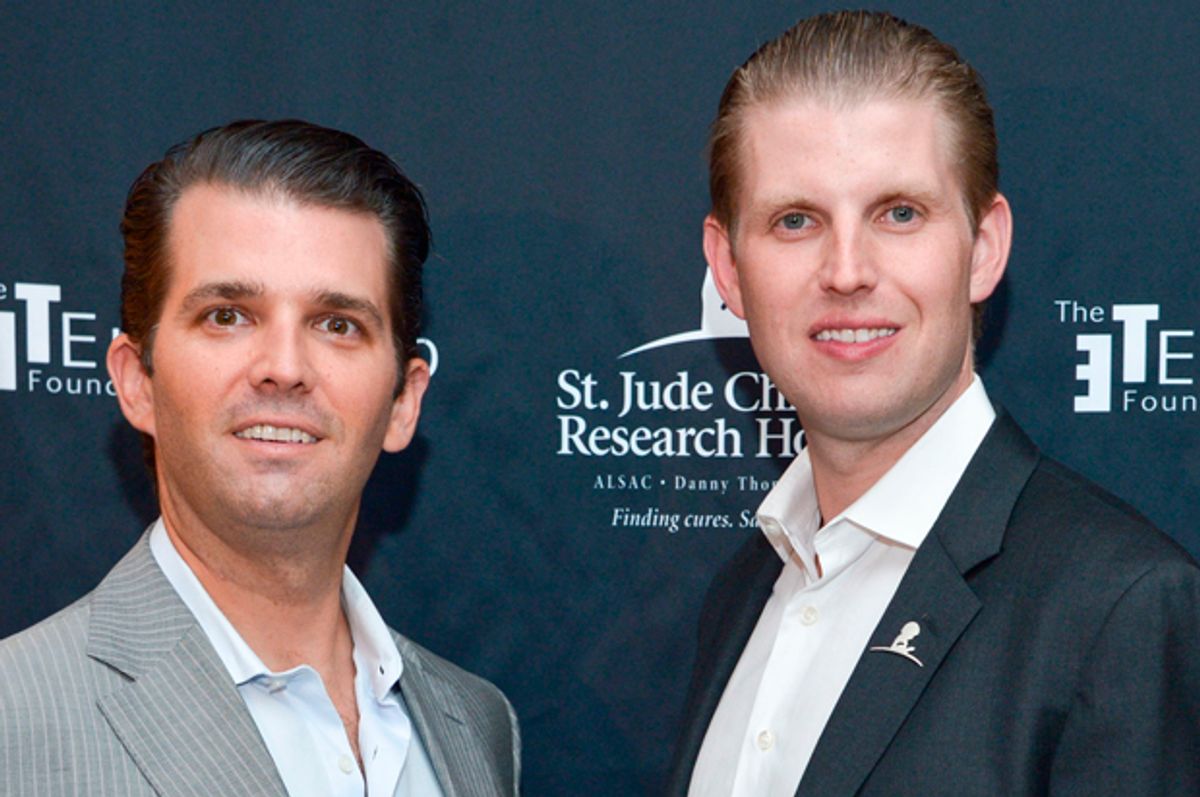 If the Trump family’s grifting did not cheapen America’s highest political office and signal to the world that our soon-to-be-first family views the nation’s wealth as a bountiful harvest for a kleptocratic regime, one would almost have to admire its shamelessness.

The latest example of the Trumps’ likely intent to profit from their patriarch’s administration comes to us via TMZ. The gossip site recently got its hands on an invitation to a fundraiser, called the “Opening Day Event,” set for the day after the upcoming inauguration and aimed at the hunting, shooting and fishing communities that supported Donald Trump’s presidential run. The fundraiser’s proceeds will go towards “conservation charities.”

And hoo boy, are the Trumps asking people to pony up. There are several levels of charitable giving for donors. The top one, called the “Bald Eagle,” promises a multiday hunting and fishing expedition for four guests with Donald Trump Jr. and his brother Eric, among other goodies, in exchange for a cool $1 million donation.

Or for a measly $500,000, a “Grizzly Bear” donor can score a multiday hunting and fishing expedition with the Trump brothers, but for only two guests. Other donors can score access to a VIP lounge at the event and an “Outfitter’s Pro Package with commemorative custom details,” whatever that is.

If enough people donate half a million or even a million dollars, Donald Jr. and Eric will have found themselves a nice way to spend time in the wilderness with rich political donors instead of hanging out in New York running the family business. Which is supposed to be kept separate from government entanglements so that the Trumps cannot profit from the presidency.

Donald Trump himself has said that his business will not initiate any new deals while he is away from it. This is a silly and unbelievable standard for the Trump Organization, a multibillion-dollar worldwide corporation that operates hundreds of companies and has been opaque about its finances. But let us take the president-elect at his word.

Does anyone think a person who will put up $1 million to spend a few days traipsing through the wilderness with the Trump brothers and their Secret Service retinue is doing so without hoping for a return on the investment? If you are interested in land conservation and have a million dollars to throw around, you can donate it directly to a particular charity that advocates for conservation. You certainly do not need the ear of two people who are supposedly going to stay away from any activities that reek of favorable government treatment, and cannot “do new deals” for the corporation they ostensibly run.

There is reason to be skeptical in regard to the proceeds from the event that anything more than a token amount of the eye-popping sums of money that donors are being asked to give will wind up in the bank accounts of "conservation charities."

As the old line in Hollywood goes regarding box-office receipts, there is no net.

These are not aimless questions. As Blake Farenthold of The Washington Post reported in great detail during the presidential campaign, Donald Trump’s charitable giving over the decades has been nearly zilch. His own Donald J. Trump Foundation seems to have been mostly an enterprise in self-dealing, with donations being spent in all sorts of ways that violated federal laws governing the charitable use of funds. There is simply no reason, absent much more transparency about Opening Day and the money it raises, to believe that we will see an honest accounting of the donations or that they won't lead to business that down the road lines the family’s pockets.

At a glance, this event looks much like Eric Trump’s attempt to raise money for St. Jude’s Hospital in Tennessee by auctioning off a “coffee date” with his sister Ivanka for a minimum bid of $50,000. After several wealthy bidders publicly made it clear they were bidding on the meeting for the express purpose of eventually gaining access to the president of the United States, Eric was forced to cancel the auction.

We should be as vigilant about the Opening Day event as we were about the coffee date with Ivanka. We cannot, nor should we, give the Trump family the benefit of the doubt on this or any other charitable event its members are involved in over the next four years. There is little that anyone can do to stop Donald Trump from using the prestige and power of his office to enrich himself and his family. But constantly shining a light on any potential efforts to do so might at least limit the damage.