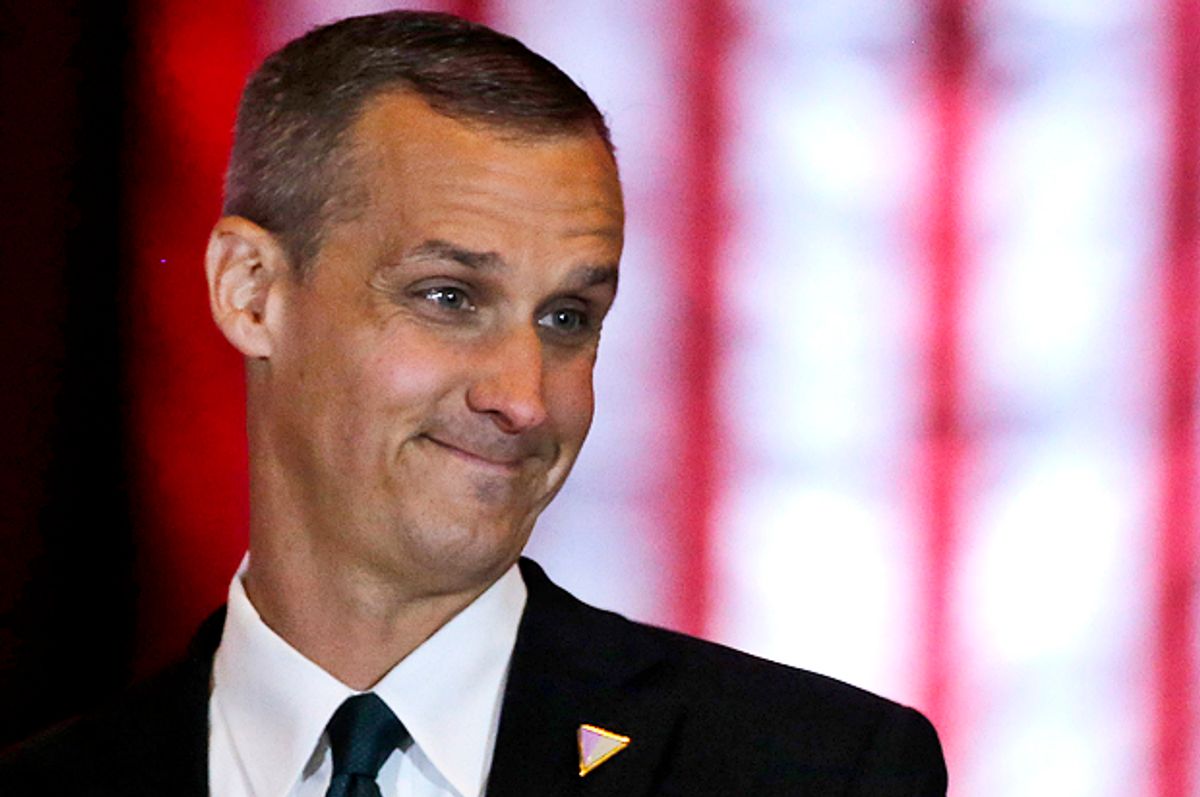 If you can't beat 'em, join 'em. Or at least move down the block from 'em.

After leading a presidential campaign to reduce the influence of political consultants and lobbyist in Washington, D.C., former Trump campaign manager Corey Lewandowski is now going to open his own lobbying firm in Washinton, D.C.

Lewandowski will partner with former Ben Carson campaign manager Barry Bennett to open "Avenue Strategies." Lewandowski and Bennett have known each other for years, going back to their days in Ohio politics. Bennett joined the Trump campaign shortly after the former reality TV star won the GOP primary in New Hampshire. Lewandowski, for his part, has remained in close contact with Trump since being forced out as campaign manager, shortly after he manhandled a female Breitbart writer.

CNN, from which Lewandowski was forced to resign last month, reported that he decided to cash in on Trump's presidency from the outside after being cast aside by Trump's transition team.

"He's always been the one that was going to get screwed from the infighting," an unnamed source told CNN.

"After considering multiple opportunities within the administration, I informed (Trump) and his team I think I can best help him from outside the formal structure of the government," Lewandowski said in a press release announcing his firm's launch. Bennett told CNN that Lewandowski first spoke with Trump, incoming White House chief of staff Reince Priebus and Bannon before announcing the launch of his lobbying firm.

According to the Washington Examiner, Lewandowski and Bennett's firm will be a half block from the White House. The firm's website, avenuestrategies.com, also emphasizes the two principals connections to Trump. The firm will take clients starting Jan. 1, Bennett told CNN, though they had none yet to announce.

Lewandoski was previously a lobbyist, although he identified lobbyist as "the fundamental problem with the ruling class" when he was Trump's campaign manager. Suddenly, lobbying is apparently a noble effort to Lewandowski, so long as it is in service of Trump's agenda.

"It is necessary to have strong, organized groups who can help ensure the president-elect's agenda is achieved. My goal is to make sure the priorities of the Trump administration become reality," he said in a statement.

Bennett told the Washington Post that Lewandowski is prepared to register as lobbyists again “if work requires it.”