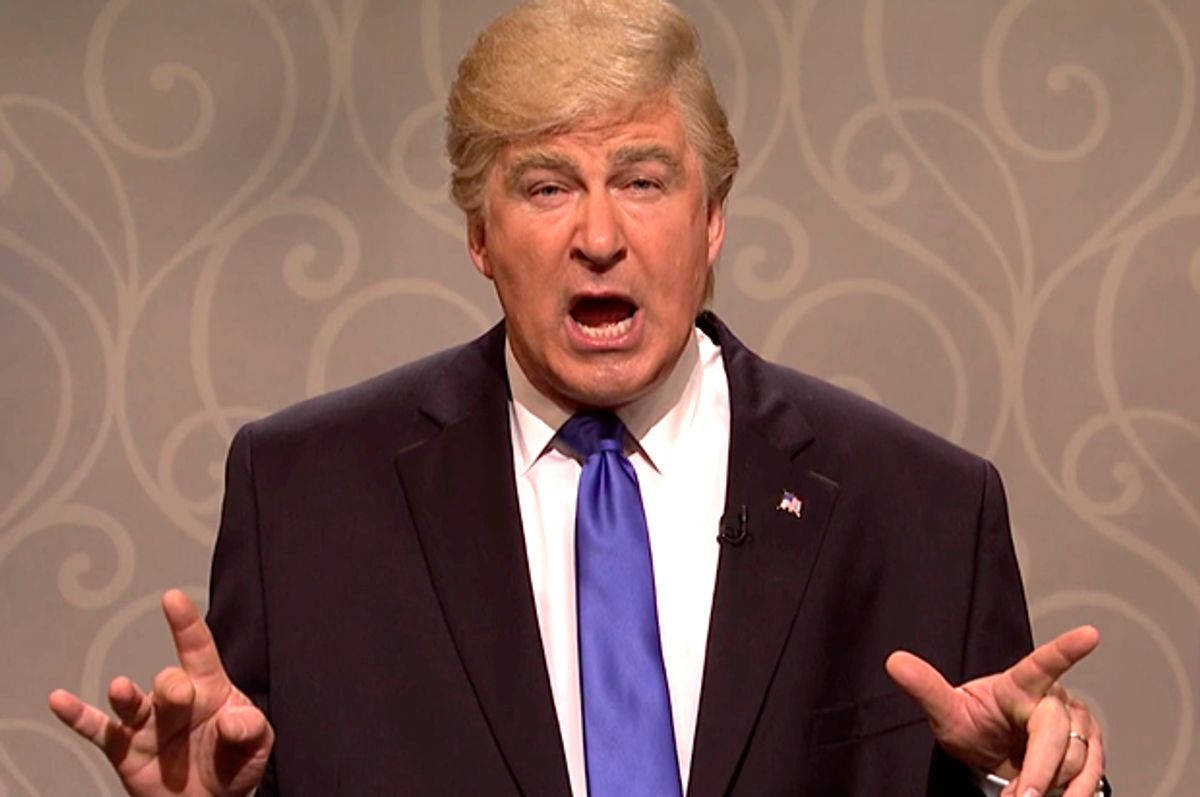 There have been countless impersonations of Donald Trump, but Alec Baldwin's "Saturday Night Live" caricature really seems to get under the president-elect's skin. What are his secrets?

Baldwin also told The New York Times that he adds "puffs" between Trump's sentences in order to make his impersonation more effective.

"I see a guy who seems to pause and dig for the more precise and better language he wants to use, and never finds it," Baldwin told The New York Times. "It’s the same dish — it’s a grilled-cheese sandwich rhetorically over and over again." Baldwin also discussed how he plays up Trump's hand gestures, such as transforming the president-elect's characteristic gesticulation into a "wax-on, wax-off" movement.

If Baldwin has any concerns about his impression, it isn't that it stinks or is too mean, but rather that it has rendered its subject almost likable.

"I do recognize that that is a possibility," Mr. Baldwin said in his interview. "But I think that now that he is the president, we have an obligation — as we would if it was him or her — to dial it up as much as we can."
Baldwin also acknowledged that, while he intends to continue playing Trump as much as possible, his schedule includes two upcoming movie shoots, which will clash with at least some "Saturday Night Live" episodes. The actor ended his interview with an oddly hopeful note. "Whoever it is, wouldn’t it be great to be the person who pulls the sword out of the stone? Who gets rid of this guy?" Baldwin said. "Wouldn’t that be thrilling?"

...@realDonaldTrump Equal time? Election is over. There is no more equal time. Now u try 2 b Pres + ppl respond. That's pretty much it. — ABFoundation (@ABFalecbaldwin) November 20, 2016

...@realDonaldTrump You know what I would do if I were Prez? I'd be focused on how to improve the lives of AS MANY AMERICANS AS POSSIBLE.

...@realDonaldTrump I'd be focused on improving our reputation abroad, including actually fighting for freedom and not just oil.

...@realDonaldTrump I would make every effort 2 retrain Americans so 2 cre8 jobs. 1 way u make America gr8 again is 2 put it back 2 work. — ABFoundation (@ABFalecbaldwin) November 20, 2016

...@realDonaldTrump I would make appointments that encouraged people, not generate fear and doubt. . — ABFoundation (@ABFalecbaldwin) November 20, 2016

@realDonaldTrump
I could go on. You want more advice, call me.
I'll be at SNL.