Newt Gingrich's semi-hilarious ethics lecture: Donald Trump is so rich we can't worry about it 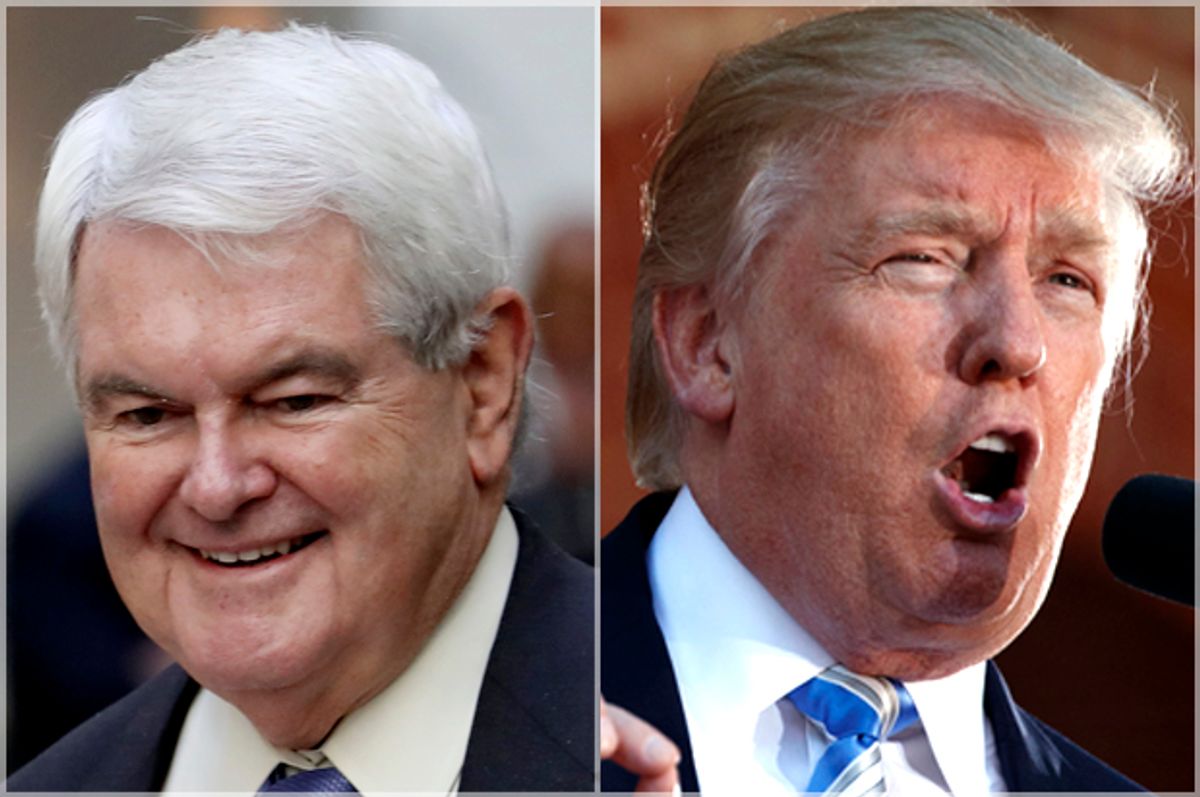 In 1997 the House of Representatives reprimanded its speaker, Newt Gingrich, for ethical violations. Gingrich had admitted to having violated federal tax law and then lying to a congressional committee investigating the charges against him. The House voted overwhelmingly to fine Gingrich $300,000, the first time in its 200-year history that the congressional body had reprimanded and punished a speaker for ethical violations. The following year with the stench of his punishment lingering over him, Gingrich resigned from both the speakership and Congress.

So to put it mildly, Gingrich is not a man with a lot of moral standing for discussing ethical conundrums for elected officials. Which makes his comments to radio host Diane Rehm on Monday so jaw-dropping in their cynicism, even coming from a has-been of a Washington insider as cynical as Gingrich.

The former speaker had been invited onto Rehm’s show to discuss the almost innumerable potential conflicts of interest facing Donald Trump and his worldwide web of businesses as he prepares to assume the presidency, and whether anti-nepotism laws could keep Trump from appointing family members to positions in his administration, as he is known to be trying to do.

After acknowledging that Trump’s wealth and brand name present unheard-of challenges to ethics rules designed to keep elected officeholders and their relatives from profiteering off the government, Gingrich presented his solution. The short version: This is all really hard to figure out, and the president can pardon anyone who breaks ethics laws anyway. So maybe we should just let him do what he wants in populating his administration with his children and cronies. In exchange, Congress or someone can establish some vague framework for reviewing his entanglements and occasionally wagging a finger in disapproval.

No, really. That is about the extent of it. Gingrich noted the following:

We have never seen this kind of wealth in the White House, and so traditional rules don't work, and we're going to have to think up, you know, a whole new approach. . . .

I've suggested that people who are widely respected, like Attorney General Mukasey, might — that the president-elect might want to form a panel who are sort of a review group, if that makes sense, and that the panel would monitor regularly what was going on and would offer warnings if they get too close to the edge.

One of Rehm’s other guests, Richard Painter, a law professor who spent two years as the head ethics lawyer for George W. Bush’s administration was having none of it:

There is no billionaire exception in the Constitution of the United States. . . . The pardon power cannot be used by the president to pardon himself or to cause other members of his administration to engage in illegal conduct, unconstitutional conduct and then simply use the pardon power in that way.

In other words: Stuff it, Newt.

Gingrich’s plumping for the Trump administration’s right to ignore ethics rules it finds inconvenient is especially ironic, considering that Gingrich came to power in 1994, when Republicans captured the House majority for the first time in decades, with promises to clean up the rot he had claimed had settled into Congress under Democratic rule. He helped put in place ethical codes of conduct and then promptly violated them and has spent the last 18 years trying to rehabilitate his image as an uncorrupted reformer and outsider who wants to see the decadent Washington elite tossed out of power. The chance to write this chapter in his own narrative was the reason Gingrich attached himself like a lamprey to Trump’s presidential run in the first place, and he has spent the past year spouting this gospel on Fox News, among other places.

Now he is arguing that with Trump about to replace an Obama administration that the GOP has long claimed was deeply corrupt, and having prevented a Clinton administration that it had promised to start investigating the minute the election ended, it should not apply these same ethical rules to the incoming president. His apparent reasoning is that Trump’s wealth is just too unique and overwhelming to bother worrying about.

This is not a surprise to anyone who has followed the three-decade arc of the deeply corrupt and cynical career of Newton Leroy Gingrich. But let us take him at his word that Donald Trump wants to “clean up” Washington because we live, as Gingrich has said, “in an age when people are convinced that government corruption is widespread both in the United States and around the world.” Exactly how does letting the incoming administration off the hook on corruption issues ahead of time help fight that perception?

The answer, of course, is that it doesn’t. Perhaps Trump voters do not expect it to, so long as Trump delivers on his promises to them. But administration mouthpieces like Gingrich should not and cannot be allowed to rewrite the rules that they have paid lip service to expecting Democratic administrations to abide by. The anti-corruption statutes apply to everyone, regardless of whether they possess Trump-level wealth and assets. Or they apply to no one. After eight years of complaining that Barack Obama is a dictator who sees himself as above the law, surely we can expect the GOP to put its money where its mouth is. Right?