Are Donald Trump and Kellyanne Conway on the same page when it comes to Trump's proposed Muslim ban?

The president-elect took the opportunity to gloat about his Muslim ban, which is still vague and secretive 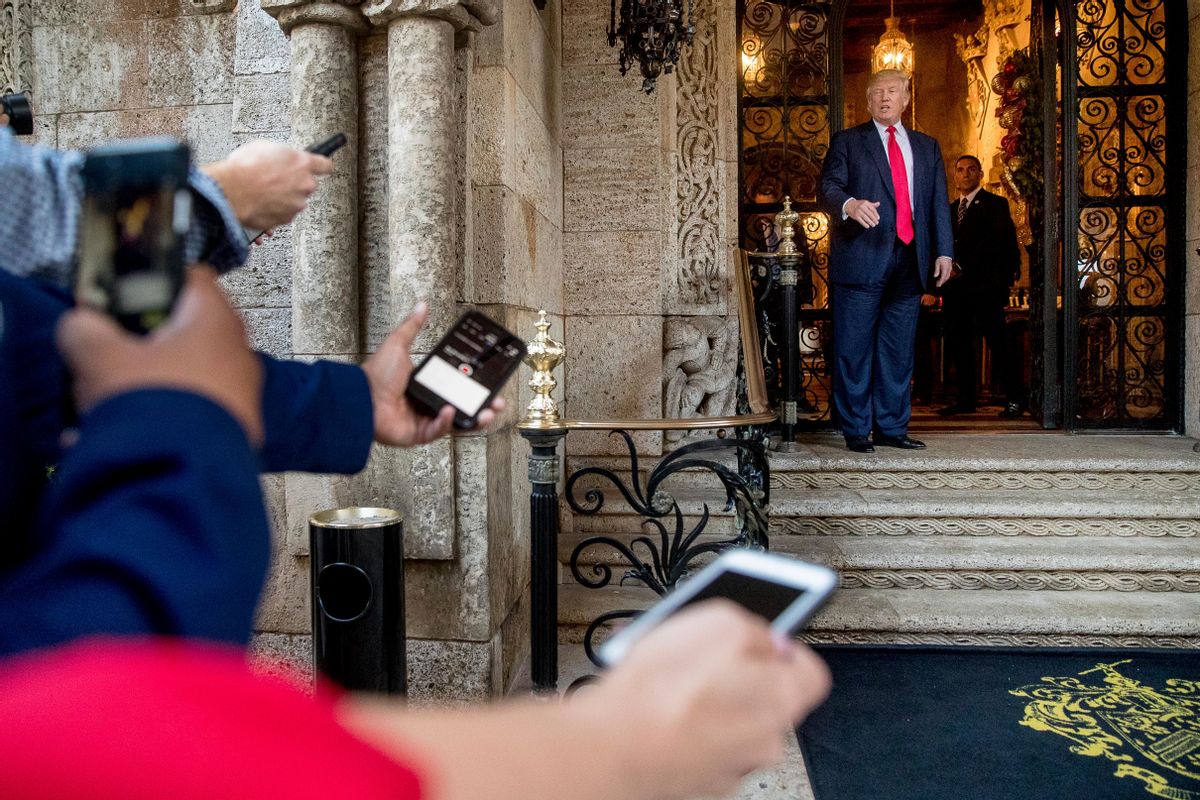 President-elect Donald Trump, right, speaks to members of the media after a meeting with admirals and generals from the Pentagon at Mar-a-Lago, in Palm Beach, Fla., Wednesday, Dec. 21, 2016. (AP Photo/Andrew Harnik) (AP)
--

President-elect Donald Trump suggested on Wednesday his proposed ban on Muslims from entering the country was vindicated after the recent terrorist attacks in Germany and Turkey.

"You know my plans. All along, I've been proven to be right — 100 percent correct. What's happening is disgraceful," Trump said, fielding questions from reporters outside his Mar-a-Lago resort in Palm Beach, Florida.

"What's going on is terrible," Trump said on Wednesday in response to the latest attack in Berlin that left 12 dead and 48 injured. "It's an attack on humanity. And it has got to be stopped."

Earlier this summer, on the day of the Pulse nightclub shooting in Orlando, Florida, Trump actually tweeted that he "appreciated the congrats for being right on radical Islamic terrorism."

However, on Thursday, Kellyanne Conway, Trump's former campaign manager and newly named White House aide, told CNN's "New Day" that the Trump administration will not pursue a ban on Muslims based solely on their religion. Conway indicated that the original proposal, which was a blanket ban of all Muslims, changed and evolved over the course of the campaign. She said that people were stuck on the earlier plan, "Versus what he said later about it when he made it much more specific and talked about countries where we know that they got a higher propensity of training and exporting and, in some cases, harboring terrorism," Conway said.

Will being Muslim automatically qualify someone for a potential ban? "No," Kellyanne Conway tells @ChrisCuomo. https://t.co/uWSc27CUjo

Trump has campaigned on the pledge to ramp up security, proposing to build a Muslim registry and to block Muslims from entering the country. Since winning the election, Trump has turned to immigration hardliner Kris Kobach, the Kansas secretary of state, to handle issues pertaining to homeland security on the transition team. Two weeks after the election, Kobach revealed his plans before a meeting with the president-elect, accidentally exposing documents that involved headlines like: "entry of potential terrorists."