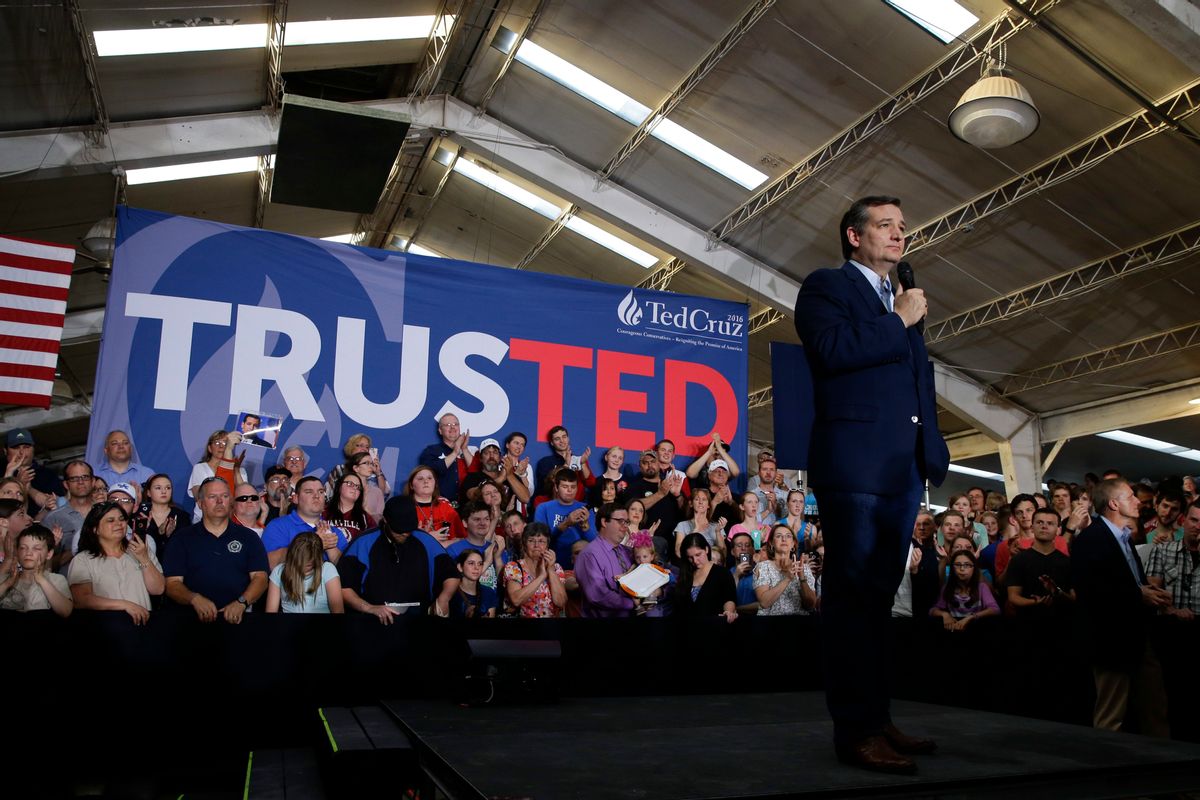 FILE - In this April 25, 2016, file photo, Republican presidential candidate Sen. Ted Cruz, R-Texas, speaks during a rally at the Johnson County Fairgrounds in Franklin, Ind. Cruz won 11 states and finished a surprising second in a Republican presidential primary, but his popularity may be slipping nationally and back in Texas. Cruz was roundly criticized for refusing to endorse Donald Trump at the Republican National Convention. (AP Photo/Michael Conroy, File) (AP)
--

Republicans are planning on turning back the clock on gay rights once President-elect Donald Trump takes office.

The so-called First Amendment Defense Act, or FADA, "prohibits the federal government from taking discriminatory action against a person on the basis that such person believes or acts in accordance with a religious belief or moral conviction that: (1) marriage is or should be recognized as the union of one man and one woman, or (2) sexual relations are properly reserved to such a marriage."

In other words, you can discriminate, but you have to say that you're discriminating because your religion wants you to.

Because of the bill's language, it would not only permit discrimination against homosexual couples, but also unwed heterosexual couples and single mothers, so long as the business owners can claim that their religious beliefs are being violated. Because the phrase "moral conviction" appears in the legislation, one wouldn't even need to connect their discriminatory acts to a specific religious creed or doctrine. All one would have to do is cite a moral conviction that sexual activity outside of heterosexual marriage is offensive.

Nor is the bill limited to business owners. FADA's logic could also be used to justify pharmacies refusing to fill birth control prescriptions, businesses not offering health benefits to a same-sex marital partner, adoption agencies discriminating against gay families, and even hospitals turning away LGBT people or their children.

"There cannot be even one iota of doubt that this bill endorses one set of religious beliefs above others, and targets people in same-sex relationships, married or not, as well as unmarried heterosexual couples who live together," said Jennifer Pizer, Law and Policy Director at Lambda Legal, in an interview with NBC Out on Wednesday. "It's an unconstitutional effort to turn the clock back to a time when unmarried mothers had to hide in shame, and LGBT people had to hide, period."

Both Trump and Vice President-elect Mike Pence support FADA, as do a number of Trump's other cabinet appointments, from budget director Mick Mulvaney to secretary of housing and urban development Ben Carson.

"Hopefully November’s results will give us the momentum we need to get this done next year," said Conn Carroll, a spokesman for Sen. Mike Lee of Utah (who co-sponsored FADA in 2015), during an interview with BuzzFeed News on Dec. 9.

Carroll later added, "We do plan to reintroduce FADA next Congress and we welcome Trump’s positive words about the bill."

Sen. Ted Cruz of Texas, the bill's other co-sponsor, told BuzzFeed News that "the prospects for protecting religious freedom are brighter now than they have been in a long time. We are having ongoing conversations with our colleagues both in Congress and leaders in the new administration about a multitude of ways we can honor the commitment made to the voters in this last election."