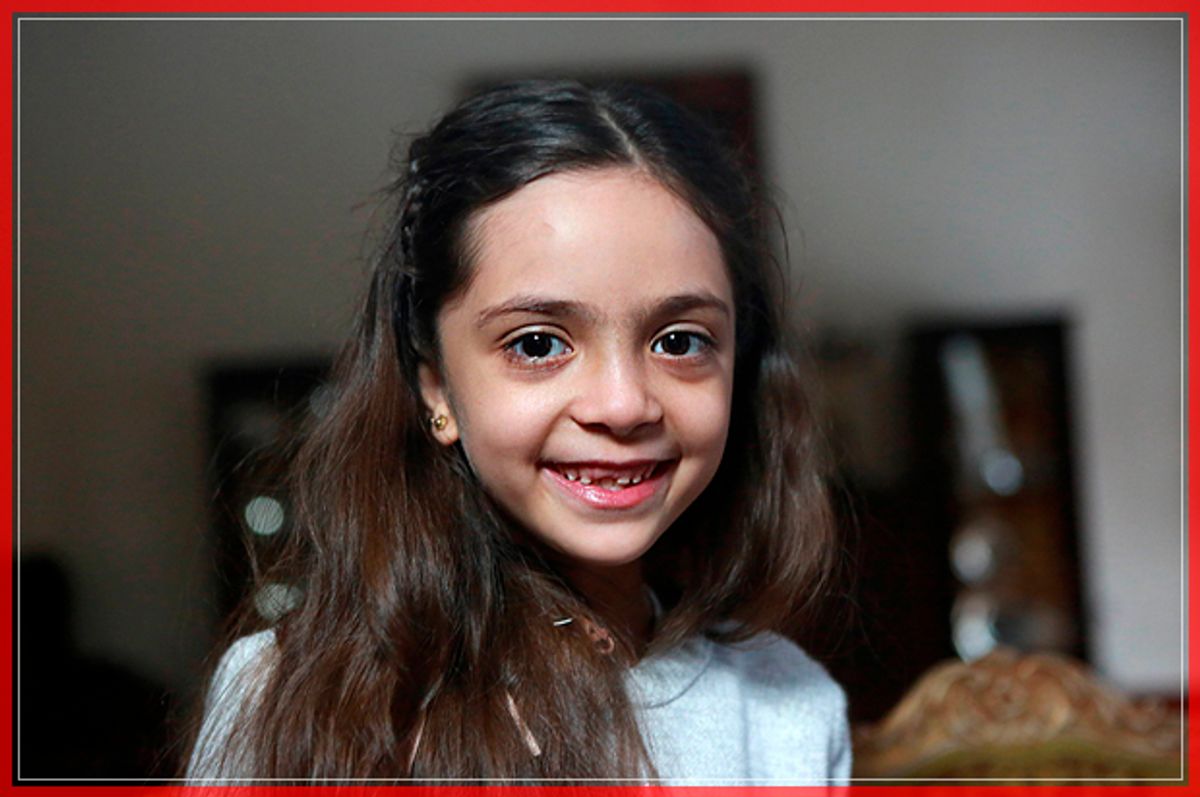 Syrian girl Bana al-Abed, known as Aleppo's tweeting girl, poses during an interview in Ankara, Turkey, on December 22, 2016. The young Syrian girl was one of thousands of people evacuated from once rebel-held areas of Aleppo in the last days under a deal brokered by Turkey and Russia. She was evacuated on Monday and Turkish officials promised then she would come to Turkey with her family. But it was not clear when she had crossed over. / AFP / ADEM ALTAN (Photo credit should read ADEM ALTAN/AFP/Getty Images) (Afp/getty Images)
-- One of the most touching scenes in Charles Dickens’ “A Christmas Carol” is the Ghost of Christmas Present’s peek inside Bob Cratchit’s home on Christmas Day. The Cratchits are hardworking and poor, and serve at the mercy of bosses like cruel Ebenezer Scrooge. Their holiday spirit, despite their hardships, captivates Scrooge, who watches the family make a huge fuss over their Christmas dinner centerpiece: a goose that was quite small by most standards, but to the Cratchits, it was an immense delight. As Dickens wrote, “There never was such a goose. Bob said he didn’t believe there ever was such a goose cooked. Its tenderness and flavour, size and cheapness, were the themes of universal admiration. Eked out by apple-sauce and mashed potatoes, it was a sufficient dinner for the whole family; indeed, as Mrs. Cratchit said with great delight (surveying one small atom of a bone upon the dish), they hadn’t ate it all at last! Yet every one had had enough, and the youngest Cratchits in particular, were steeped in sage and onion to the eyebrows!” The Cratchits, who have found a way to feel as though they have enough even when it’s clear they don’t, stand in stark contrast to Scrooge, whose greed kept him from ever feeling like he had earned enough, amassed enough, bested the competition enough. When Scrooge is transformed by the Christmas spirits, his first order of business is to send a neighborhood boy to the poulterer to buy the biggest turkey in the window and deliver it, anonymously, to the Cratchits. The Cratchits, who were already satisfied with the thought of their small Christmas goose, would have more than enough for once — this gift that Scrooge can give them proves to be enough to sustain him, too. What a wonderful word, enough.
—Erin Keane, managing editor The radiance and innocent beauty of this young girl belie the utter horror she has escaped in her home city of Aleppo. Youthful resilience is perhaps the only hope for a region torn asunder by violence and conflict.

Girona, Spain   Pau Barrena/Getty
Vietnamese brothers try to break the Guinness World Record for climbing stairs of the Girona Cathedral while balancing head-to-head. They broke the record for 90 stairs in 52 seconds I got a copy of "The Guinness Book of World Records" for Christmas when I was roughly 8 years old, and I loved it. Looking at this photo, I wonder how much fatter the book must have gotten since then. If head-on-head stair balance-climbing is now an active category, what possible human endeavor is not??

Palm Beach, Florida   Carlos Barria/Reuters
Donald Trump's image is reflected on a door window while he attends a meeting at the Mar-a-Lago estate Trump glowers (does he ever do anything else?) behind a grate in the middle of his Palm Beach resort Mar-A-Lago, somehow both in the middle of whirl of people and utterly alone. This photo is a perfect distillation of the man: He has had multiple wives, five children and runs around the country collecting acolytes, but you can't shake the feeling that he doesn't have any real love in his life, and doesn't really understand what that would feel like.

Don't pity him, though. He's a monster who will ruin us all.