After getting caught trying to sell access to his father, Eric Trump is sad to learn that corruption exists 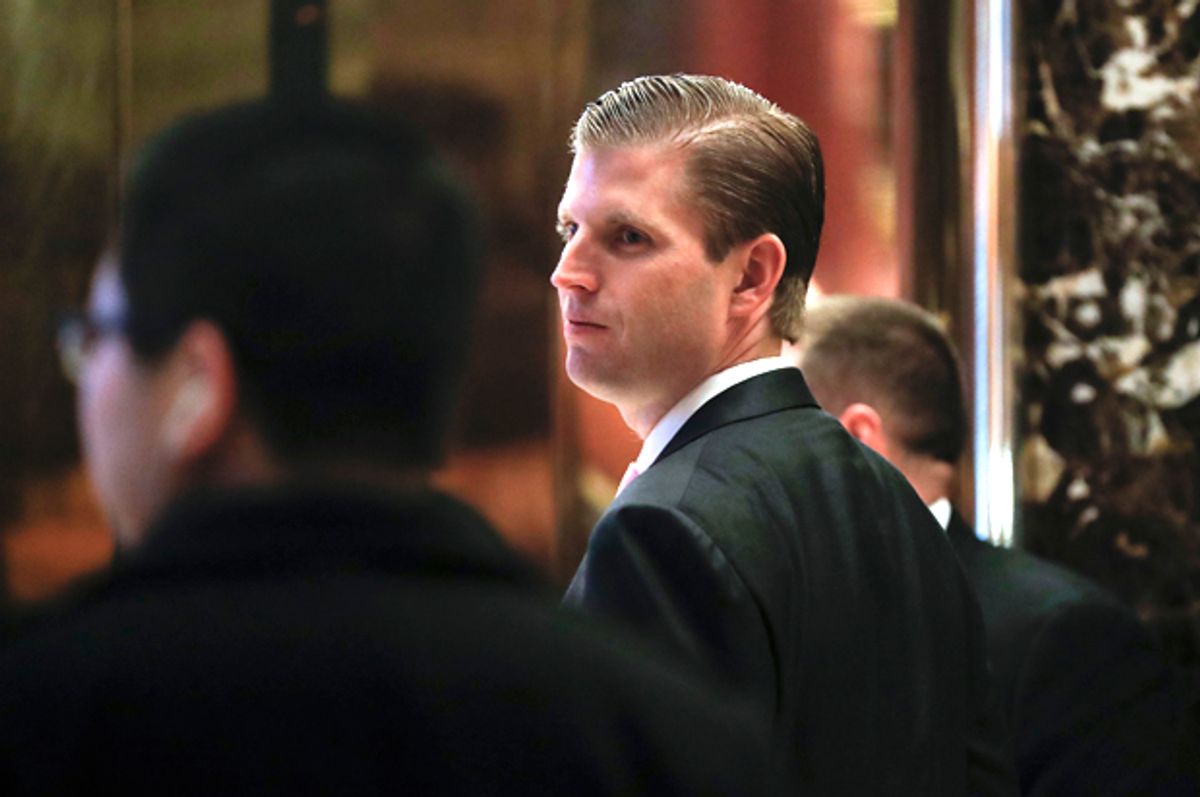 Donald Trump isn’t even president of the United States yet and already the people around him are scrambling to cash in on his electoral victory. This includes his two adult sons, Donald Jr. and Eric, who got caught by the Center for Public Integrity setting up a pay-to-play charity event for their father’s inauguration that would have provided donors access to the president in exchange for $1 million.

Once exposed, the scheme quickly fell apart as the transition team insisted that no final plans had been made and Trump’s sons disassociated themselves from the shady, week-old charity organization that would have collected the donations.

Now The New York Times reports that Eric Trump will cease his fundraising efforts for his charity the Eric Trump Foundation “because he now recognizes that his status as the president-elect’s son means that donors could try to use him to gain access to his father.” Per the Times, Trump’s son said “I understand the quagmire. . . . You do a good thing and it backfires.”

This is a positive development in that it mitigates one of the raging multitude of potential ethical breaches that the Trump presidency will usher in. But come on, let’s be real: Eric Trump is not doing this because it has suddenly dawned on him that wealthy people will try to buy access to his presidential pop by way of supposed charities. He’s doing this because he and his brother were caught trying to do precisely what he now says he understands is wrong, and he’s playing Pollyanna to protect his reputation.

We know that Eric Trump previously understood how wealthy people can try to leverage charitable donations into political access because he spent much of the 2016 campaign talking about how that was happening with the Clinton Foundation.

Eric Trump called into Brian Kilmeade’s radio show in August, and Kilmeade asked him about reports that the crown prince of Bahrain secured a meeting with Hillary Clinton, who was then secretary of state, after donating money to a charity that worked with the Clinton Foundation. Trump said that the Clinton Foundation reporting had revealed to him how corruption works. “I’m a civilian in all this and, looking in, I’ve never seen this kind of corruption before,” Trump said. “This political process and having a front row seat to it has opened my eyes. It’s taught me an enormous amount. But the corruption in the political system in this country is unbelievable.”

He went on to explain how shocking, galling and awful it was that rich people could give money to a politically connected charity and then expect access to powerful people in return. “There were people [at the Democratic National Convention], there were big donors from the Clinton Foundation who said, ‘I don’t understand. I’ve given millions of dollars to the Clinton Foundation. Why don’t I get to get in to the elite parties with Hillary herself?’ It is pay for play, and that is exactly what’s happening.”

So no, I’m not buying this idea that Eric Trump has just lately been stripped of his naiveté and come to the sad realization that his proximity to his father can be exploited by wealthy donors. He understood that type of conflict perfectly well before he and his brother hastily erected a nonprofit for the explicit purpose of auctioning off access to their dad to rich people.

As Josh Marshall wrote, this attempted inaugural cash grab wasn’t an accident or a product of a poor ethics framework: It’s the plan. The fact that we’re still a month from the inauguration and Trump kids have already been caught trying to sell off a piece of the presidency is pretty strong evidence that they will likely spend the next four years exploiting every opportunity to cash in.

The nonprofit aspect is just a small part of that plan. Eric Trump will get some good headlines for stepping back from his charity, but the massive, unresolved problem remains the fact that he and his brother are going to take over an international business organization in which their father, the president of the United States, will have a continued interest. They can afford to step back from nonprofit grifting so long as the leader of the free world is an active partner in their opaque business interests.