WATCH: "I made a big boo-boo": Newt Gingrich offers video apology for suggesting Donald Trump might not "drain the swamp" 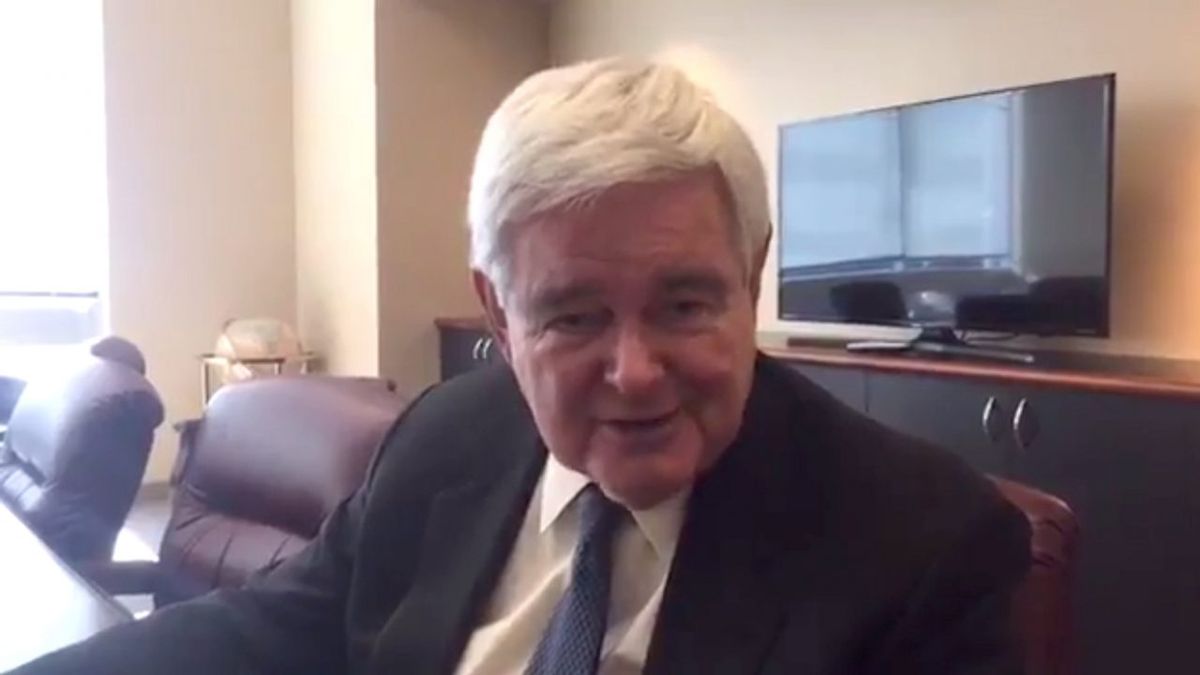 “I want to report that I made a big boo-boo,” former House speaker Newt Gingrich announced in a video Thursday. The mea culpa came after Donald Trump rejected Gingrich's recent assertion that the president-elect had abandon his campaign promise to "drain the swamp."

Facing the camera directly, the onetime Georgia congressman and top Trump booster was forced to eat his words that since being elected the New York businessman was no longer interested in ensuring Washington isn't beholden to special interests.

“I goofed,” Gingrich said in a rare admittance of fallibility.

During the hostage-style video, Gingrich said he had “mischaracterized” Trump’s attitude when he told NPR’s “Morning Edition” on Wednesday that Trump now "disclaims" the catchphrase. The promise to drain the D.C. swamp was “cute” during the campaign, Gingrich suggested, but was no longer desirable.

So I want you all to know I goofed. “Draining the swamp” is in. The alligators should be worried, uh, and you’ll hear me write more about alligators and the swamp. But I thought I owed it to all of the folks who follow me that when I make a mistake I’m gonna be straightforward and tell you. I blew that one. “Draining the swamp" is in, President Trump wants to do it, and you’re gonna get to be part of it.

Just before Gingrich posted his apology video, Trump took to Twitter to rebuke an unnamed "someone" for suggesting that swamp-draining was no longer on the agenda:

Gingrich's quick reversal looks even more like a coerced effort at appeasement when you consider Trump's own comments about the slogan from the campaign trail.

In late October, Trump said he wasn’t initially sure if he liked the phrase, but that over time it had grown on him. “It’s become one of the hottest phrases anywhere in the world and I’m saying I like it.” Trump went on. “The people like it.”

As president-elect, however, Trump has rushed to fill his cabinet with Wall Street and D.C. veterans, including several former Goldman Sachs executives, after previously claiming the financial giant “robbed our working class” during the campaign.

The prospect of swamp-draining has come to seem so absurd in recent weeks that even former Trump campaign manager Corey Lewandowski -- who announced plans to open a lobbying firm a block from the White House this week -- told Fox News on Thursday that it is “somewhere down at the bottom” of Trump’s priorities: