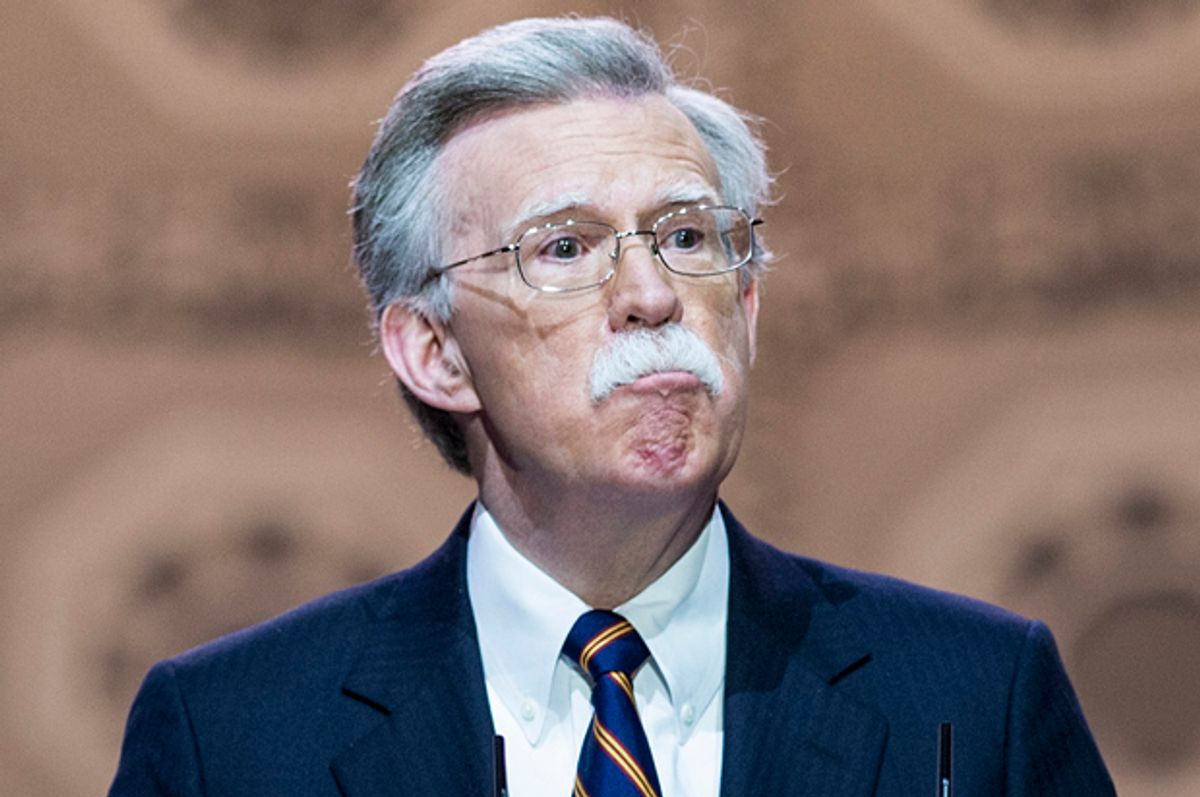 Addressing allegations that former United Nations ambassador John Bolton was passed over for secretary of state because of his mustache, the AMI staff banded together to defend one of their own and denounce the rumored act of discrimination. After referencing Trump's long history of superficial statements -- from his hosting of "The Apprentice" to his misogynistic comments about former pageant queen Alicia Machado -- the AMI let things get hairy.

"The paradox, of course, is that Mr. Trump’s orange face and spaghetti squash mane would, theoretically through his own Clark Gable paradigm — who ironically had a mustache — would make Mr. Trump himself unfit to serve in a position of leadership," the AMI staff wrote. "But beyond the esthetic and ongoing pattern of his embrace of an alt-right-like discrimination, the Mustached American community is deeply troubled by a new administration erecting yet another obstacle towards a level playing field for people of Mustached American heritage."

The AMI added that "our quarrel is not political as we are a non-partisan institution of learning, thought and facial hair militancy."

After that, the AMI launched into some interesting history about the American presidency's relationship with facial hair.

"Certainly, the 20th Century opened with iron-fisted Mustached American leadership as Teddy Roosevelt took us through eight powerful years in the White House. The exceptional William Howard Taft and his lower nose foliage were swept into office immediately thereafter.

"In the blink of an eye, however,  we seemingly pivoted to a self-conscious nation concerned with the aesthetic perspectives of others. And Mustached Americans have since faced a ongoing pattern of discriminatory government, business and cultural policies. To wit, neither of the major parties has even nominated a Mustached American candidate for President of the United States since Thomas E. Dewey challenged Harry S. Truman."

The article also mentioned that there are real prejudices against people with facial hair.

"In 1991 researchers J.A. Reed and E.M. Blunk published the “Effects of Cranial and Facial Hair on Perceptions of Age and Person” in the Journal of Social Psychology finding clean-shaven men are seen as more reliable in roles such as salesmen and professors," the AMI wrote, "and a “2013 Workplace Mustache Study” by the American Mustache Institute found that despite the exceedingly high acceptance of mustaches in the workplace, Mustached Americans are still a minority in management positions with only 30 percent reporting to a supervisor living a life of facial hair."

The AMI made clear their displeasure with the possibility of Trump passing over Bolton because of his mustache.

"Throughout much of his presidential campaign, Donald Trump has preyed on a broad array of fears — vilifying Mexicans, poking fun at the handicapped, misogynistically castigating women and now — perhaps most unsettling — discriminating against people of Mustached American descent," the AMI wrote, before concluding by saying, "Mr. Trump, your discriminatory actions are unacceptable. The Mustached American people will stand by no longer."

Full disclosure: The author of this article has a full mustache and beard himself, so he may be trying to rig the system against the clean-shaven Trump.