Did Fox News just admit defeat in the War on Christmas? 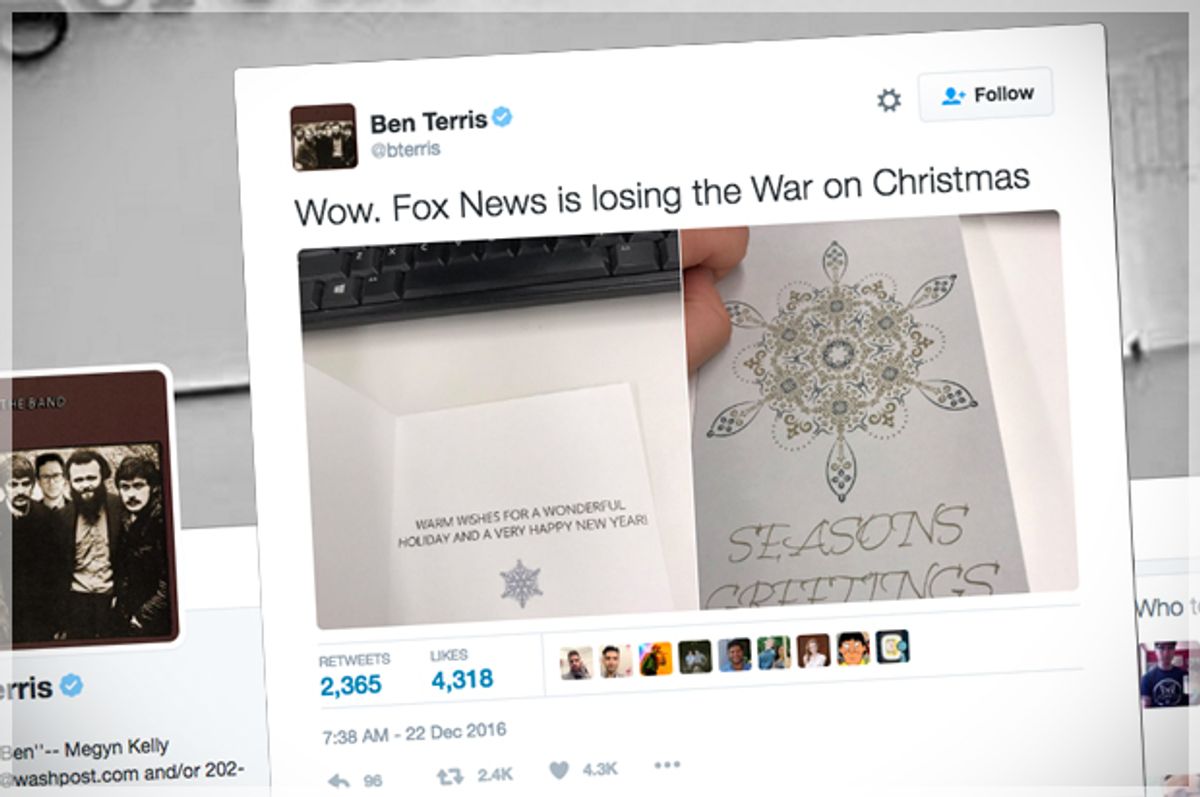 If this Christmas card does indeed come from Fox News, then it appears the right-wing news network has already surrendered the War on Christmas that it has been trumpeting for all these years.

Wow. Fox News is losing the War on Christmas pic.twitter.com/TfP1C1Pe9b

This picture, which was tweeted out by The Washington Post's Ben Terris on Thursday, says "Seasons Greetings!" on the cover. Inside the card wishes its recipients -- presumably Fox News employees -- "a wonderful holiday and a very happy new year!"

Since Terris does not include proof that the card came from Fox News, readers are currently left to take him at his word. If the card is proved to have come from Fox News, however, this will prove to be more than a mere faux pas.

"The term [War on Christmas] arose in the writings of anti-immigration activist Peter Brimelow in 1999 but languished until October 2005, when John Gibson appeared on The O’Reilly Factor to discuss his new book, The War on Christmas: How the Liberal Plot to Ban the Sacred Christian Holiday Is Worse Than You Thought," writes the Harvard Business Review. "The thrust of the argument made by Brimelow and Gibson is that governments and large corporations are actively pushing an anti-Christian agenda."

Among the proofs of a War on Christmas cited by Brimelow (who is also an active white nationalist), Gibson, Bill O'Reilly, and other Fox News talking heads is the secularization of the Christmas holiday and the substitution of the Christian-specific "Merry Christmas" with more generic expressions like -- well, like "Seasons' Greetings" and "Happy Holidays."

Even President-elect Donald Trump chimed in on the War on Christmas myth during the 2016 presidential election.

"I'm a good Christian," Trump told an Iowa rally in October 2015. "If I become president, we're gonna be saying Merry Christmas at every store ... You can leave happy holidays at the corner."