How to argue with your relatives about abortion: A few arguments that don’t work with pro-lifers and some that might

If you anticipate an argument over abortion politics with Aunt Cheryl at this year's family dinner, read this first 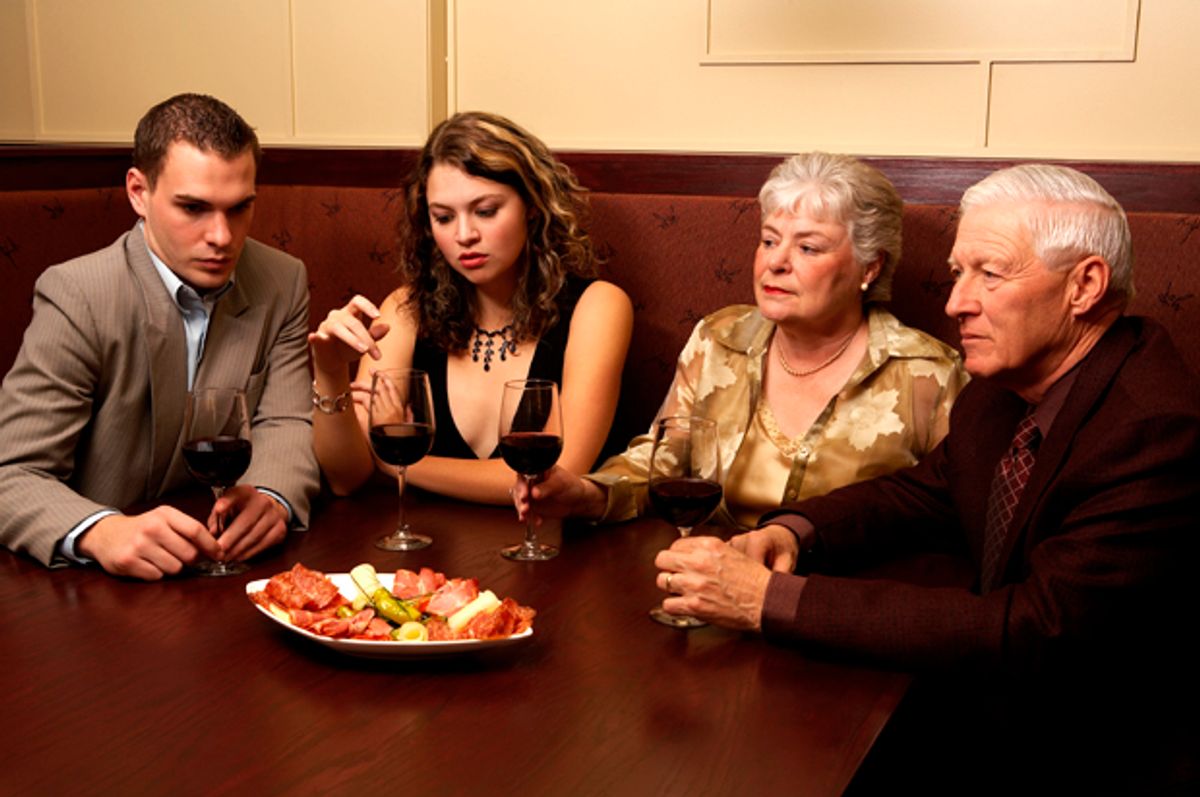 Holiday gatherings can be tense when beliefs clash, and after November's election emotions are running high on both sides. Here are some things to keep in mind if you and your pro-life Aunt Cheryl get into it over Donald Trump, the Supreme Court, Ohio, Mike Pence and the future of reproductive rights in America.

First, acknowledge that abortion isn't only a conservative Christian concern. Some religious traditions you work hard to respect take prohibitive stances on abortion. Many people following Hindu and Islamic traditions have determined gestational ages and conditions under which they believe abortion should be prohibited.

Even the Dalai Lama has said that abortion is an act of killing but "it should be approved or disapproved according to each woman’s circumstance." Fetus-protecting politics are not exclusive to Christian traditions, so when you’re sitting across from your Aunt Cheryl at the holiday table, pretend she’s a Buddhist so you’ll be more patient with her.

Don’t argue semantics like using “anti-abortion” versus “pro-life.” If you do, her eyes will glaze over and you won’t get anywhere. She has chosen her side and it has a name. Labels are important to her but not to you. What matters to you is initiating a dialogue that acknowledges the ambiguity of this particularly volatile issue.

Remember that her news feed does not resemble yours. If she keeps pro-life company, she is daily inundated with graphic images of mangled babies and brutal videos of late-term miscarriages and forceps-requiring stillbirths being passed off as abortions. In these circles, opponents of abortion are revered as life-saving heroes in a wash of star-spangled propaganda. The chatter is all about saving babies and a repeated narrative of “my evil doctor told me I should have an abortion, but I didn’t, and my child was fine anyway, and now we’re a happy family doing a photo shoot in a park in autumn.”

Never say that a fetus is not a baby or argue that it is not alive. Pro-life women are disgusted by the “vagina as magic portal”-style pro-choice argument in which some dark magic takes place during birth that transforms a fetus into a person. Even if you maintain that independent breathing marks the beginning of life, many premature infants cannot breathe on their own, but we still call them infants, not fetuses. Concede the human-ness of the fetus.

Don’t argue that abortion gives a woman autonomy over her body. In doing so, you infer that the woman’s body is the only one involved, and whether you believe a fetus should have civil rights ornot, we must all admit that it does in fact have a body, a tiny physical manifestation. Denying that it does ensures you will lose the argument.

This argument also ignores our collective tendency to fetishize maternal sacrifice. Who doesn’t adore at least one of the hundreds of movies in which a woman is transformed by motherhood and makes great personal sacrifices, or even dies, to save her child? American politicians on both sides consistently fail to demonstrate that women have as much value as men or children, so you should not be surprised that Aunt Cheryl is most concerned with the rights of the child.

Don’t argue against adoption as a viable alternative or say that it’s unreasonable to expect a woman to give up nine months of her life, that she might lose her job, that her health might be compromised. Again, you are likely talking with a person who idolizes maternal sacrifice and does not realize how little she thinks about the experiences of women, who probably voted for a man who boasted about sexually assaulting women simply because he could, just so she could save babies. Most pro-lifers do not realize how often they participate in misogyny — just like the rest of us.

Don’t talk about exceptions for cases of rape. Those arguments have been anticipated by certain pastors and propagandists who maintain that pregnancy in cases of rape is rare. Remember Todd Akin, the congressman from Missouri who argued in 2012 that “if it’s a legitimate rape, the female body has ways to try to shut that whole thing down”? He also said that in rare situations when this female sorcery didn’t work, the rapist should be punished, not the child. Aunt Cheryl will never believe those few cases justify the continued slaughter of millions of innocent lives.

Never contend that abortion is a single issue and there are other issues of equal importance. For the pro-lifer, there is no issue that trumps life. Many of them refer to contemporary America as a “culture of death,” which might be confusing for anti-war, anti-death penalty liberals, but pro-lifers not only support the rights of the fetus; they also tend to rally against Kevorkian-like practices; they do not support mercy killings.

They are consistent in their belief that all people, even those who are terminally ill, should live for as long as God intends. Many argue, quite validly, that legalizing euthanasia would place undue pressure on elderly, disabled and terminally ill people, especially when there's poverty, to end their lives before they burden their families. Concede that Christians want to conserve life, even if you believe their focus tends to be on the sanctity of the white middle-class lives of men and children.

So what can you say?

Try these approaches, which might soften the edges of the conversation and eventually result in a more healthy dialogue about abortion:

Emphasize the importance of pregnancy prevention. Tell your Aunt Cheryl that the vibrant presence of many organizations advocating for women’s health, such as the leviathan Planned Parenthood, decreases the number of abortions women seek. At least you’re acknowledging that abortion is not ideal and she will appreciate that. Tell her funding cuts to Planned Parenthood have been proved to cause a rise in the number of abortions sought, specifically by low-income women.

So if she wants to truly reduce the incidence of abortion she should support increased availability of birth control and at least reject political candidates bent on decreasing available resources for low-income women. Tell her you’re more interested in reducing the number of abortions than in “being on the right side,” that you prefer to not have on your head those innocent lives, as well as the quality of the lives of the affected women.

Unintended pregnancies carry risks for the child, too. Aunt Cheryl should also know that women who aren't prepared to care for children or have adequate support are statistically more likely to neglect and abuse such children after they’re born. They are more likely to suffer depression and less likely to bond and less prone to seek prenatal care and more likely to experience domestic violence during pregnancy. Their babies are more likely to die even in the absence of abortion.

Children of unintended pregnancies are less likely to succeed in school, more likely to be poor and receive government assistance and eventually more likely to participate in criminal activity. In your Aunt Cheryl’s sheltered mind palace, every woman loves her baby. Remind her that is not always the case, that not all women are cut out to be mothers. Of course, she will begin ranting about personal responsibility and accountability. And that will lead you down the rabbit hole of class and the need for quality education for all Americans, but it’s better than the alternative conversation you’d be having.

Abortion is not a modern invention. I’m willing to bet she also doesn’t realize abortion existed during Christ’s life and he didn’t have a damn thing to say about it. Many Aunt Cheryls assume abortion is a relatively new practice, ushered in during the dirty '60s by newly braless women of loose moral character, when, in fact, abortion has been around for nearly as long as birth has. Women during Christ’s time had abortions, and many Christians in the early years of their religion shared Aristotle’s view of “delayed ensoulment,” that the embryo did not have a soul until “quickening,” the moment when a pregnant woman feels her baby moving, which occurs in the second trimester.

I had the rare privilege of working for many years as a nurse in a retirement facility for aging nuns, and despite my pro-choice politics I found I usually admired their convictions. Many religious sisters spend their lives in humble service to women, children and the poor. And though a fair portion of the sisters I cared for were surprisingly pro-choice, even those who were staunchly pro-life acknowledged the complexity of the issue and devoted their lives to empowering women by providing free or low-cost gynecological and obstetric health care, educational opportunities and free or low-cost child care — all in a spirit of love and respect, not condescension. It is impossible to estimate the number of abortions (and miscarriages) they prevented or the stable family dynamics they enabled. These women are truly pro-life and pro-family values, and there are many other such religious activists in the world.

Hold Christians like these up to Aunt Cheryl as examples of truly pro-life individuals. Ask her about her support for social programs, defunding war and abolishing the death penalty. Remind her that she might be abortion-centric because babies, being cute and mute, are easier to love, that they have been made precious by Western culture, but all human beings were babies once, and sound politics will strive for consistency. If life is the only issue that matters, policies that provide for the needs of children throughout their lives must be practiced, and war is off the table. Then, sit back and savor your pumpkin pie. You’ve earned it.

Shawna Kay Rodenberg is the author of "Kin: A Memoir," out now from Bloomsbury. She holds an MFA from the Bennington Writing Seminars and her reviews and essays have appeared in Consequence, Salon, the Village Voice, and Elle. In 2016, Shawna was awarded the Jean Ritchie Fellowship, the largest monetary award given to an Appalachian writer, and in 2017 she was the recipient of a Rona Jaffe Foundation Writer's Award. A registered nurse, community college English instructor, mother of five, and grandmother of two, she lives on a hobby goat farm in southern Indiana.