Love, loss and what I would sing: A meditation on "The Voice" auditions

“The Voice” auditions are the most beautiful things on TV. They are a metaphor for passion and risk 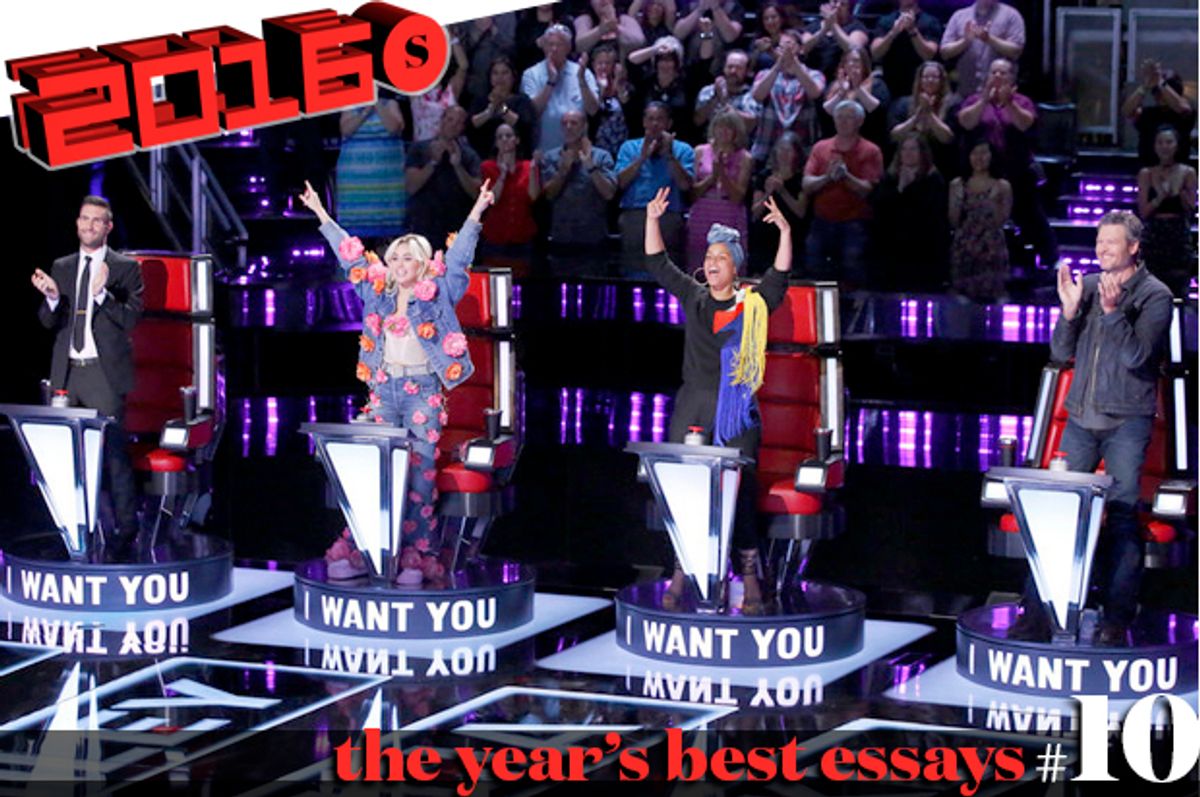 Between deciding to break up with my boyfriend and doing it, he told me I could sing.

For weeks I’d been compulsively watching “The Voice” auditions on YouTube, crying, weighing his pros and cons while would-be superstars poured all they had into a minute-and-a-half audition.

“That’s the nicest thing you’ve ever said to me,” I’d said.

I was surprised to realize I’d meant it.

He didn’t understand why it was a big deal.

We were on an evening stroll; between eye rolls he was obliging my reality television ramblings.

He’s the only judge who doesn’t seem to pay attention to the performance when he turns around, just waits for others to do the same so he can stand and shout “Dang it!”

There have been too many seasons for that to still be believable.

“Not that it matters,” I said.

If you don’t know how the show works:

Contestants sing in front of a live studio audience and four judges, famous singers who face the audience so their only way of evaluating a performance is the singer’s voice.

If a judge is interested in giving a spot on his team to the contestant, he hits his chair’s red button and it swivels around to face the singer.

The floor lights up.

The singer bravely finishes the song when perhaps all she wants to do is cry or squeal.

My favorite contestants’ voices often quiver slightly as they continue.

If more than one judge turns, the contestant picks the judge she wants to work with.

Two months later, I still catch myself pulling up Beth Morris singing “Nutbush City Limits” on the show’s British version, sure she could’ve won had she not withdrawn before the live shows for rehab.

But oh, her leopard jumpsuit.

Oh, the devilish look she gives Ricky when he turns his chair just as she finishes.

Was it her nerves?

Is this unfair to Kevin Simms, the eventual winner?

I cried watching his audition, too.

Well, I cried when the cameras cut to his wife crying backstage.

His tenor hit the rafters.

“The Voice” auditions are the most beautiful things on television.

It doesn’t matter; nothing matters when you’re watching.

I grew up singing Kelly Clarkson, Dixie Chicks, and Sarah McLachlan in the shower.

And while doing homework.

And when I didn’t even realize I was.

My father ignored me.

My mother urged me to use that passion elsewhere.

My brother, ever blunt, said I was tone deaf.

“Why do you bother changing the pronouns?” he’d ask.

Paxton Ingram singing “Dancing On My Own.”

Who doesn’t want to dance to a British boy singing about how he’ll like what’s underneath an American’s baggy jeans?

Who doesn’t want Ricky to dip them like he does Kylie?

I love when the judges genuinely love what they hear.

CeeLo Green biting his lip when he turns for Erin Martin.

The look on Ricky’s face when Rachel Ann hits the high notes at the end of “In for the Kill.”

How Danny O’Donoghue awkwardly dances in his chair.

I want to feel all the feelings with them.

When my ex said I could sing, I stayed with him another two weeks.

I made lists of songs I would perform, which judge I would pick.

If on the American version: Pharrell Williams.

If on the British: Paloma Faith.

Of course all the judges would turn for me.

This is my fantasy.

No matter when I go to karaoke I always manage to pick completely unsuitable songs.

It doesn’t matter Tove Lo’s “Habits (Stay High)” is too high for me.

If YouTube were my boyfriend he’d know the next video I always want to watch is Vince Kidd singing “Like a Virgin.”

If I auditioned I’d have to keep closer to the chest.

I love when a contestant sings one of the coaches’ songs.

Lee Glasson singing “Can’t Get You Out of My Head.”

Vangelis singing “Do You Really Want to Hurt Me?”

I want to pull the ultimate power play: I want to sing Gwen Stefani’s “Wind It Up” but pick Adam Levine as my coach.

I’m single now, and he’s got a beautiful gay brother.

That’s what this is about, isn’t it?

Whenever a friend is considering a breakup, I encourage it.

The truest bathroom graffiti I’ve ever seen: “The second you think about leaving, go.”

One kindness amidst hundreds of unkindnesses and I clam up, deciding to play at contentment instead of risking loneliness.

Most interesting to me about “The Voice”: There have been eleven seasons of the American version, six British, and five Australian.

That’s almost a thousand contestants on just the English-speaking versions, and there’s no sign of them slowing production for lack of talent.

Doug Paul Case is a writer and photographer based in Bloomington, where he recently earned an MFA from Indiana University. He is the author of the poetry chapbooks "Something to Hide My Face In" and "College Town."